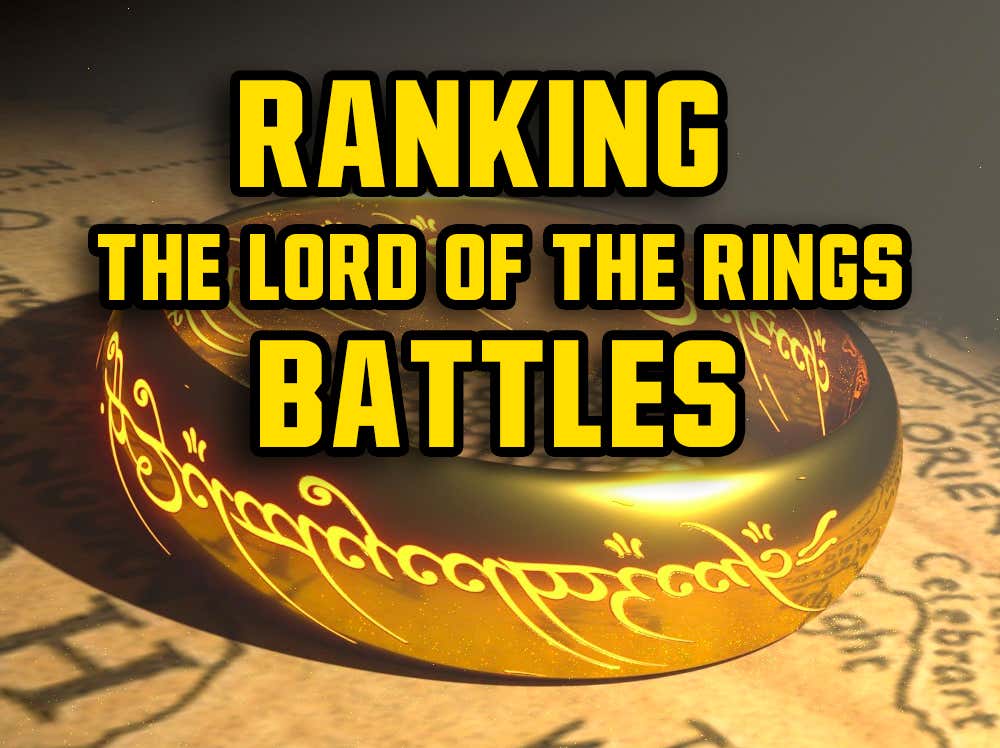 This is not including the Hobbit movies. Sorry but I just won't entertain them. Honorable Mentions: The opening battle at Dagorlad. I always loved how this set the scene for the movies with this large scale action and awesome worldbuilding. Also, I have Gandalf vs the Balrog, which is a badass, yet short-lived standoff.Lastly, I have Gandalf vs Saruman, which I wish so badly was longer and cooler. It did give this great video:

The Sam and Frodo parts are definitely annoying at times, but Sam has more than his fair share of good moments in the trilogy. This David vs. Goliath moment is great, and Sam's fearlessness vs this horrifically scary giant spider rules. Funny that these movies were all filmed in NZ considering a spider this size probably exists there or in Australia.

9. Eowyn vs the Witch King of Angmar

"I am no man!" is one of the best single lines in the whole trilogy. Standing up to the Witch King and his fucking 5' long sword and fucking huge mace/morningstar thing is just such a great moment for her character and one of the best individual fights within the larger battle of Pelennor Fields. Also, the behind the scenes of the development of the mace is well worth a watch.

8. The Battle of Osgiliath

One of the great aspects of the battle of Helms Deep was the last-stand nature of it, and I think that applies here as well. The Rangers and Gondor troops setting this ambush, the suspenseful nature of the stealth attack with the Orcs wooden D-Day looking landers, and how quickly the battle goes from looking hopeful to a desperate retreat makes it such a gritty battle scene. Also, Gothmog line of "The age of men is over, the time of the Orc has come" after impaling Faramir's lieutenant? Damn, what a moment.

There isn't really any cavalry battles in the trilogy, which is maybe why I like this so much. The wargs are horrifying creatures, basically bear sized hyenas. The fact that they are ridden by these putrid, devlisih-looking Orcs is just the cherry on top. Sharku is also maybe one of the more foul looking minor Orcs. Highlight of this scene is definitely Gimli trying to bench press the warg off him while more weight gets added on. Either that or the impossible flip onto the horse that Legolas does.

Everybody with a soul got pissed off at the orcs cutting down all the trees in Isengard, and Treebeards reaction to finding out made it even worse. Thats what made this scene so much sweeter than your average fight. Seeing them stomp out these little assholes and send them flying like  the Big Show vs Mysterio was so gratifying. Also, seeing the one ent that was on fire dunk his head in the water was so satisfying for some reason.

5. The Battle of Amon Hen

Right after we are shown how much strong Uruk-hai are than your average Orc, we get Aragorn and the gang vs about 100 of them. Aragorn's swagger walk into the horde, his jump into the crowd and dagger use, SO good. His 1v1 vs Lurtz, while short, is also very satisfying. Any time a guy licks blood off a blade or pulls one deeper into themselves, you know they aren't fucking around. RIP Boromir, you kinda sucked but you saved it in the end.

4. The Battle of the Black Gate

I always loved Aragorns back-and-forth with the Mouth of Sauron (not featured in the clip), and his speech before the battle is definitely among the better in a battle scene.The desperation of the score goes so perfect with the situation as well. Were their tactics great? Well, no. Allowing yourself to get surrounded off the bat is never a great idea, but it was just to free up Frodo. Also, the Aragorn vs Battle Troll was originally shot as Aragorn vs Sauron, which is kind of crazy when you think about it.

3. The Battle In Moria

Fuck you, Pippin! The sheer dread of the clanking and what that meant was so great, and the battle lived up to the apprehension and then some. "They have a cave troll", what a line. Hot take, goblins are scarier than orcs. They're smaller, more nimble and can crawl on walls. It's like fighting bugs or something. They're attempt to fight the cave troll while managing the goblins reminds me of fighting a big boss in a video game that keep spawning smaller enemies, which is just cool to me. Frodo getting skewered was also one of those serious OH SHIT moments from the trilogy.

2. The Battle of Minas Tirith/Pelennor Fields

I wanted to separate these two, but they really are just part of the same grander fight. One of the great things about RTK is how, despite the little victories of the previous movie, the odds are still WAY against the good guys. That is maybe the most present in the siege. Launching the heads into the city, the Nazgul swooping in on the defenders, GROG, the armored battle trolls?? So damn awesome. That's all to say nothing to how great Theoden's speech was as the Rohirrim showed up to save the day. Screaming DEATHHHHHHHH before plowing through your enemies? Hell yea. I think sometimes their battle vs the Mumakil kinda gets slept on as well. Legolas taking one down and getting the "That only counts as one!" line from Gimli is still one of my favorite parts of the trilogy.

1. The Battle of Helm's Deep

The siege of Helm's Deep is not only my favorite battle in the trilogy, but one of my favorite large-scale battle scenes in any movie ever. The suspense, the brutality and realism are all almost unmatched. A lot of this has to do with Peter Jackson and the dedication he put into this scene. It took nearly 4 months of night shoots to film the 40 minute siege, and an insane amount of it was practical instead of CGI. They had so many extras and stuntmen that really gave their all for this scene, and it paid off in spades. Every part of this battle is not only great from an action standpoint, but also from a storytelling standpoint. There is just so much desperation for these people fighting vs these single-minded killing machines that are stronger, better equipped and more in number. The Uruks chanting before the battle always gets the blood flowing, as does the berserker/wall explosion scene and Aragorn's charge into the Phalanx. Theoden's final ride into the beast before getting saved by Eomer and Gandalf will always be a shining moment for me as well. Legolas surfing on the shield is definitely a little cheesy, but that's literally the only groaned moment in the entire battle. The "side by side with an elf" and "you're going to have to toss me" lines are also among the best trio moments.