Major League Baseball, assessing a myriad of proposals, has discussed a radical plan that would eliminate the traditional American and National Leagues for 2020, a high-ranking official told USA TODAY Sports, and realign all six divisions for an abbreviated season.

The plan would have all 30 teams returning to their spring-training sites in Florida and Arizona, playing regular-season games only in those two states and without fans in an effort to reduce travel and minimize risks in the midst of the COVD-19 pandemic.

The divisions would be realigned based on the geography of their spring-training homes.

YOU WANNA GET NUTS? LET'S GET NUTS!

I think it's safe to say Major League Baseball is willing to run through just about any possible option if it means their guys get to play baseball in 2020. If outer space is do-able then it's on the table. We saw earlier in the week the proposal for a bio-dome in Arizona with everyone playing locally in Phoenix for the entire season. Another option appears to be using both the Florida and Arizona sites which would allow for teams to play in their respective home facilities that they'd normally be using in February and March. That would mean for this makeshift regular season teams' divisions would be set like they are during the early spring. I don't think I've ever looked at spring training standings before so these new alignments are a complete guess to me. Let's see what this would look like.... 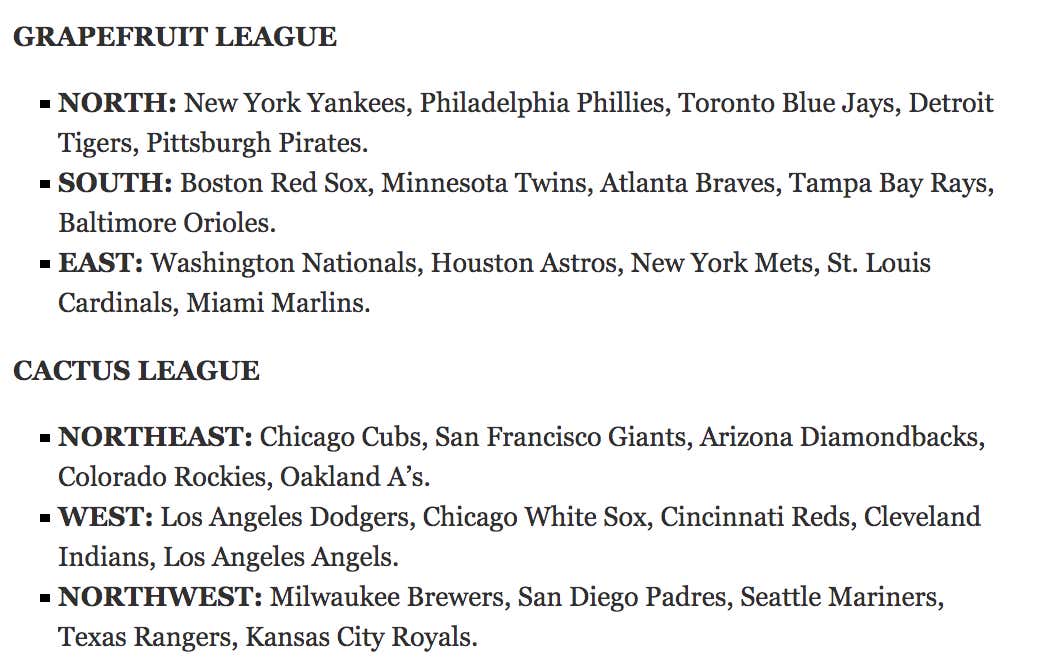 Got to say, quick glance here and I love the potential situation for the Yankees. Pirates and Tigers? Jays and Phils as their only competition. Yeah sounds good to me. That South division is an absolute fucking gauntlet with the Sox and O's battling it out for last place. Who gets fucked the most? The Astros no question. They go from the A's being their only fight for the division to getting the defending champ Nationals along with the Mets and Cardinals. Beautiful.

So besides teams playing at home why would this be an option? Money, of course. You would have games starting in the morning at like 11am and ending past midnight eastern time over in Arizona. TV numbers would skyrocket with all of the action going on everyday. This would be a huge win for gamblers too with games on all day spread out. The early work week usually without day games would be a thing of the past. If they could make this work I feel like this is the option MLB wants to use.

Again, this is just another possibility being thrown out there. I'd put this as less likely because Florida's spring training facilities are way more spread out than Arizona's and the risk then goes way up with protecting players and essential team members. It would be incredibly more difficult to safely implement this plan than the one only using Arizona. Would it be more advantageous for MLB and the fans? 100%, but there would have to be significant strides made in the country with this virus for it to happen in my mind.

Once again, I don't care how you do it, just give me baseball. The UFC getting postponed again yesterday made me more pessimistic, but I'm still hanging onto hope with each and every article written about potential seasons. Tony La Russa's quote in the article is how everyone should feel in baseball.

“There are so many workable possibilities,’’ La Russa says, “why give up on any alternative until it’s clear it can’t work? “What we can’t do is give up.’’

P.S. I realize this is a Bob Nightengale article, but desperate times call for desperate measures. This entire article from USA Today could very well be littered with mistakes and inaccuracies.