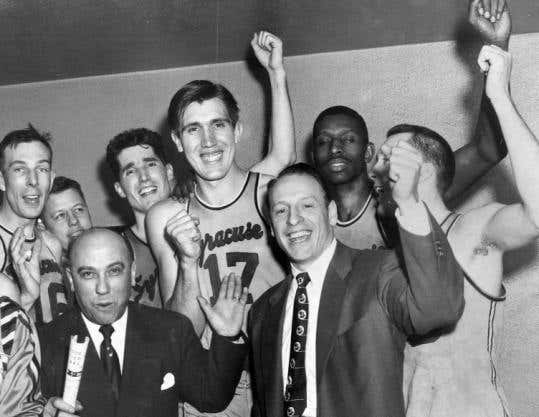 In one of the most thrilling NBA Finals, the Syracuse Nationals beat the Fort Wayne Pistons 92-91 in Game 7. The game comes down to the final seconds as George King hits a free throw to give Syracuse the lead with 12 seconds left. King would later steal the ball with three seconds left to seal the win. The home team would win all seven games in the finals, with all seven games being decided by seven points or less.

The 1954/55 season was the beginning of the modern era for the NBA, as it was the first year of the 24-second shot clock. The shot clock was the idea of Syracuse Nationals owner Danny Biasone who divided it up so there would be 30 shots a quarter. The hope was increased pace and offense would make the professional game more exciting as the sport of basketball was still reeling from a college point-shaving scandal.

The Nationals, coached by Al Cervi, posted a record of 43-29 to finish in first place. They were making their third appearance in the NBA Finals, having lost to the Minneapolis Lakers in 1950 and 1954. On the way to the Finals, the Nationals beat the Boston Celtics 3-1. The Fort Wayne Pistons meanwhile were making their first appearance in the NBA Finals. Coached by Charles Eckman, they posted a record of 43-29 to lead the Western Division. The Pistons would end the Lakers' three-year title reign, beating them in four games to reach the NBA Finals.

The series started at the Onondaga War Memorial in Syracuse. In the opener, Syracuse won 86-82 as Red Rocha scored 19 points, while Larry Foust had game-high for Fort Wayne. In Game 2, Dolph Schayes had 24 for the Nationals who again won on their own floor 87-84.

The NBA Finals format in 1955 was 2-3-2, with the middle three games being played at Hinkle Fieldhouse in Indianapolis due to the War Memorial Coliseum in Fort Wayne not being available. Mel Hutchins had a big night for Fort Wayne in Game 3, scoring 23 points as the Pistons won 96-89. Dolph Schayes had a game-high 28 points in Game 4, but the Pistons had seven players reach double-digits, led by Frankie Brian’s 18 points, winning 109-102 to square the series at two games apiece. Game 5 would be a low scoring affair, as George Yardley had 16 points to lead the Pistons to a 74-71 win.

Back in Syracuse for Game 6, Yardley had 31 points for the Pistons who were looking to close the series out. However, it was not enough as Dolph Schayes had 28 points, and Red Kerr had 20 for the Nationals who forced a seventh game for the second straight year, winning 109-104. The Pistons jumped out to an early 41-24 lead in Game 7, but watched the Nationals battle back, as the game was tied 74-74 at the start of the fourth quarter. The game would go down to the final seconds as George King gave Syracuse a 92-91 lead with 12 seconds left on a free throw. King would later strip the ball from Andy Phillips to close the game.

After the NBA Finals, the Fort Wayne Pistons had to deal with rumors that they threw the series. George Yardley believed that Andy Phillip turned the ball over intentionally at the end of Game 7, in conspiracy with gamblers. Yardley himself turned the ball over with 18 seconds left when he was called for palming the ball, Frankie Brian committed a foul with 12 seconds left. There was never an investigation, just rumor, and innuendo.