If that headline didn't stop you from clicking I feel like nothing will.. so I'm glad you're here because I am genuinely excited about this new Livestream show.

Chaps & I will be on every night between 6:15 - 6:45pm ET (ish) with an activity that combines several things I love... Interaction with stoolies, all my #content coworkers, guessing games and art (even though I suck at it).

Idea: A Barstool personality sends us a photo of themselves recreating a famous moment (art work, movie scene, song lyric, sports moment, key Barstool event, etc.) with items from around their house. Chaps and I each paint the scene from that photo on livestream while viewers (who won't be able to see the photo we're referencing) will have to guess both the Barstool #personality and the moment they've imitated.

Come onnn, stick with me here!

For the trial run tonight we did a super easy one where it was just me painting and Chaps was the secret guest. The moment he was creating was obvious to me as soon as he emailed it my way, & many of the viewers guessed off my painting pretty quickly, but the future photos from other Barstool folks will be tougher.

Here's what I could see but the viewers could NOT see as I painted: 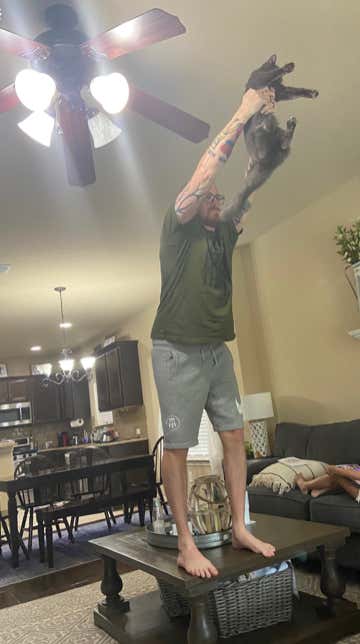 Here's the only thing the viewers could see (as I painted it): 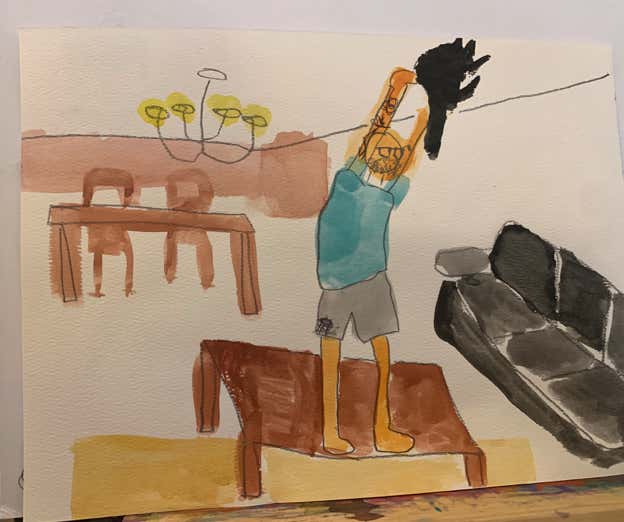 And here were some early guesses before I really fleshed things out:

At the end of about 20 minutes when enough people had guessed "It's Chaps and he's doing the Lion King, Pride Rock scene," he hopped into the chat & we caught up a little bit and he explained why he chose that scene to recreate.

I know this one was kind of quiet and slow, but moving forward I'll have Chaps on with me and more going on. My hope is that we get people in the chat every night who want to catch up with us, roast our poor painting skills, and have fun guessing along the way, and I'm also looking forward to seeing what my coworkers come up with as their photo idea. I've received about 6 back so far and they're awesome even though I have genuinely no idea what 5 of them are supposed to be. (Ellie's is a stunner!)

I also have a spin-wheel on the way where Chaps & I will have to take turns spinning each episode. Some of the things it could land on: Paint with your weak hand, paint with your mouth holding the brush, use a condiment from your fridge in the painting, etc. etc. And I also hope to have special guests on to paint with us like @chillwithchelss and stoolies.

Know I'm rambling but I'm excited about this one. I had a legitimately good time on the test run tonight and I know it was a 'lil rough and easier to guess than others will be, but think this has the potential to be a lot of fun as we work out the kinks. Hopa ya join us!