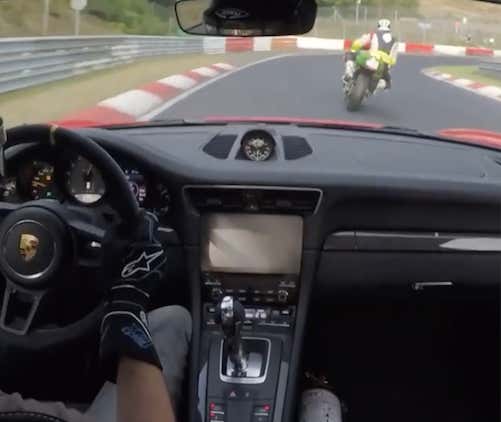 So before I show you the video, you should know that there's an entire community of people on Instagram who do this for a living. I say "for a living" but I don't know if they actually make any money. They basically just galavant around the world racing different types of super cars. It's the best job ever. They have a TON of followers too. One of my favorites is this guy Edmond Barseghian. He started on YouTube then built up pretty significant following on Instagram. His new stuff is more commercial so it's kind of lame, but the older videos are WILD. He'd be ripping it up through the streets of Mexico like a mad man without a care in the world. I want to figure out how these people get into the scene, but part of me feels like it may be family money which would be disappointing. Regardless, the videos are fun to watch. Moving on.

The one that I came across today was from this German Porsche account. I don't anything about it other than the fact that he likes to go fast. I'm talking adrenaline-boner fast. Not straight away boring stuff either- curvy, technical driving with high speed variation on both open and closed courses. Here's the video I mentioned in the title. Keep in mind, it is a LOT harder to drive a motorcycle at high speeds than it is a car...

How fun does that look? I can't think of anything I'd rather do right now with the exception of maybe not be in quarantine than drive either of those machines. He has a ton of other equally as stress inducing videos on his account too...

GT3 hunting down a Huracan

Him alone being a psycho

If you're into this kind of stuff watch a few of his videos and your Instagram explore will fill up with similar accounts. I'm not sure if anyone else is into this stuff but I LOVE it. Can't get enough. Enjoy your thirsty Thursday, queens.