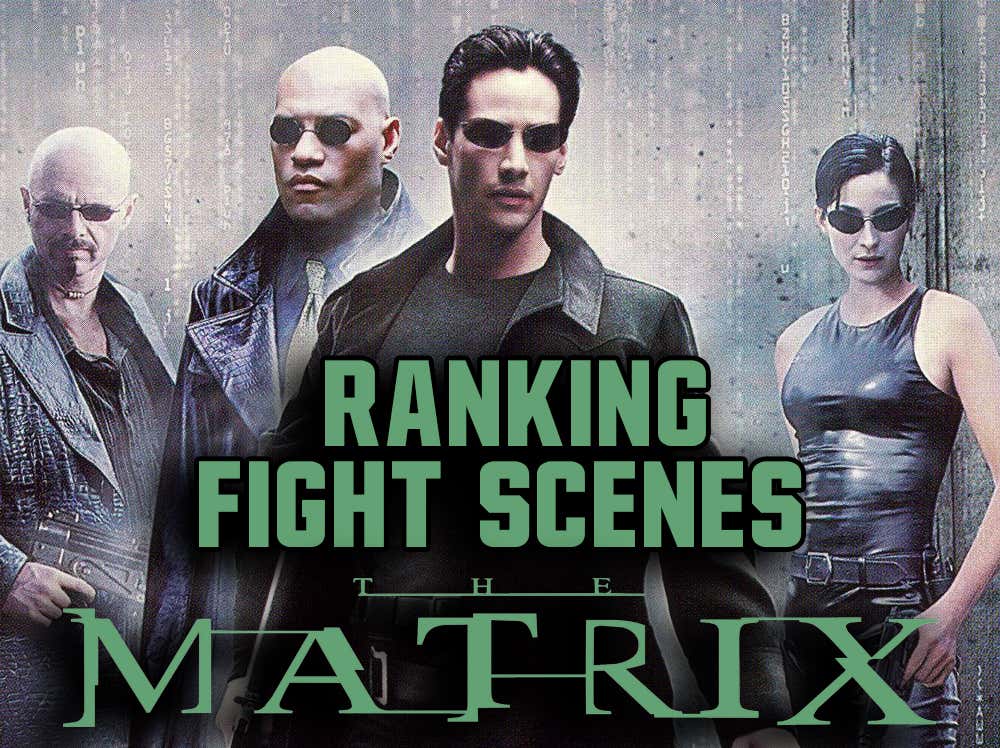 10. Seraph, Trinity and Morpheus vs Guards

I love this scene because it is our introduction to how strong the agents really are. We saw Morpheus beat the shit out of basically everybody, making him probably the strongest good guy at the particular point. To see him get fucking rag-dolled by Smith helped set the stage for what was to come. I also just love the dirty, dusty environment it all happens in.

Like I mentioned before, I really like Seraph. Collin Chou being an actual professional martial artists makes this fight way more professional than it might have otherwise looked. The only thing I don't like about this scene is that it feels too similar to the Morpheus v Neo fight.

There is a few scenes that I think immediately come to mind when people think of the Matrix. Neo Stopping the bullets, Neo dodging bullets, and then probably this fight. I think its one of the more interesting and stylized use of guns in a fight scene, if that makes sense. Everyone remembers them pulling out the Berettas, Skorpions, MP5s etc. It's plenty over the top but that doesn't make it any less awesome.

The mech suits used in Zion are underratedly sick. I love the overhead massive guns and slow methodical movement, but even better is the most notable pilot, Captain Mifune. I would die for this man. They say leaders lead from the front, and this guy was literally the first point of content for the swarm of sentinels. It's also worth noting that that actor, Nathaniel Lees, is also the MEATS BACK ON THE MENU BOYS Uruk Hai from LOTR the Two Towers.

The dust coming off Neo when he stances up and the musical note that hits? Damn, what a god damn moment. I still think most of the CGI in this trilogy, particularly in this scene, holds up really well. Also the Deagle and Berretta clicking on empty on eachothers head? SHEESH. Makes me wana go down a Hickok45 youtube rabbithole (IYKYK)

The Albino ghost twins are the most memorable thing from the Matrix 2, in my opinion. This chase/fight sequence seemingly goes on forever (in a good way) going straight from escaping the Chateu to fighting the albino guys to fighting an upgraded agent (Who i just found out played Jager in Altered Carbon) to Neo flying in and saving the day.

3. Neo vs the Merovingian's guards

As cool as gunfights are in movies, there is also nothing like a good ole fashion mele weapon fight. The broadswords, sais, maces, shields etc. So damn cool. I also love the soundtrack during this whole sequence, which gradually goes up in tempo along with the action. This is also some of my favorite, and I guess most believable, wire fighting in the trilogy.

2. Neo vs the Smiths on the Playground

This fight is really fucking expansive, and also extremely impressive when you consider how much CGI work was required and how well that CGI holds up. The wirefighting is a little cheesy at times, but at a certain point it really doesn't matter. The scale is so big but every individual 1v1 fight within the bigger battle still looks so good.

It's such a classic fight scene and it still holds up vs most any fight scene from a newer movie. The concept of being able to immediately download a skill was introduced to the audience right before this, and to see it immediately in action was such a great moment. Also, it was important seeing Neo learn in the moment get better, just before getting a tiny glimpse at his true power.

Honorable mention: Neo vs The Smiths finale. Honestly, I don't think this fight was all that great. Considering the implications of the battle and the fact that it was the culmination of 3 movies, it was a little bit of a bummer.