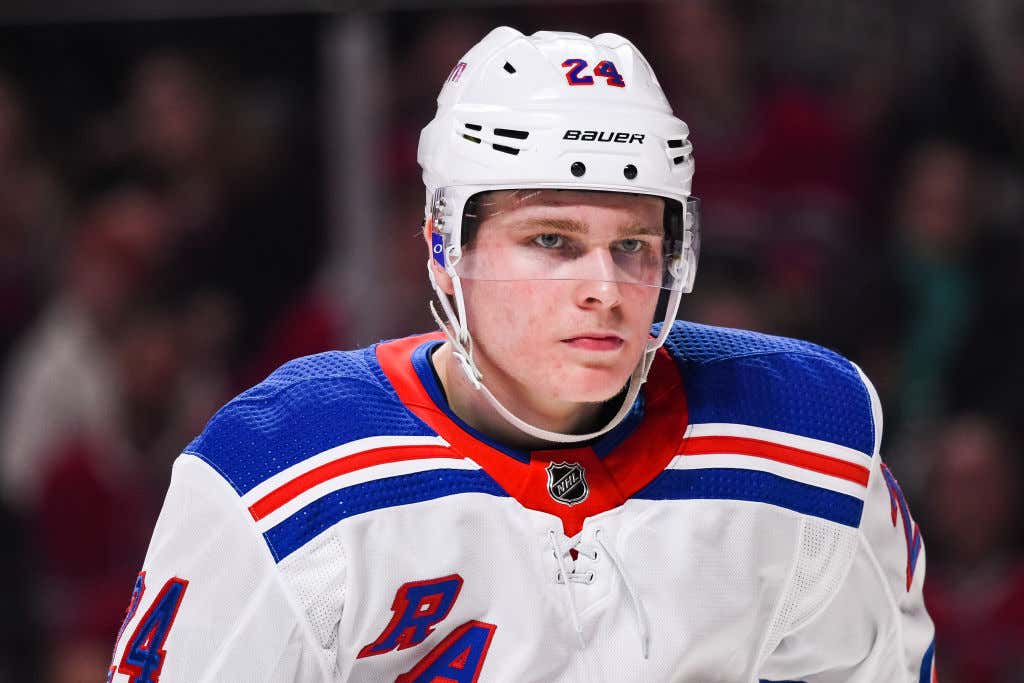 A little over a week ago I put out a tweet asking for a few questions for a Rangers mailbag blog. Then I forgot - but without anything happening in the world, the questions still hold so I picked a few. Fire away at my Twitter if you've got your own Q's or just wanna argue.

How would you grade Kakko’s rookie season, and what kind of jump can we expect next year? Also, does Lemieux get signed? Sadly I don’t think he does

Despite a surprising amount of Rangers success as a team, I really don't think Kakko's debut could've been much worse. The hype was almost impossible to live up to but I don't think anyone expected such little production (10 even-strength points) from the supposedly NHL-ready second overall pick. Pair that with undeniably terrible defensive metrics and it's been an individual disaster. On ice for a team-worst goals for AND goals against per-60 is not what anyone had in mind. I know plus/minus is an overrated stat, but when you're -26 and almost twice as bad as the next-worst teammate it paints a pretty accurate picture.

With all that said, we're talking about a rookie season for an 18 year-old expected to single-handedly turn an original six franchise around immediately. That pressure along with adjusting to the best league in the biggest, brightest city in the world over 4000 miles from home is a whole lot to deal with. Kakko's first 9 games playing largely top-six minutes ended with 2 points and an abysmal -12 while the squad won just three times. Then it looked like our savior had arrived with 5G/3A in his next 8 but that was the last we saw of him. The rest of the way was watching a kid struggle with indecisiveness, strength and confidence that resulted in goal droughts of 19, 13 & 14 games.

Playing on a line with zero playmaking ability for a majority of that stretch (Howden, Chytil & Kakko combined for 11 primary ES assists) surely didn't help, but his play outside of the offensive zone relegated him to bottom-six duty & after Quinn finally came up with reliable top-six lines there was no reason to crowbar him back up. Still, he stayed with the big club all year gaining valuable experience along the way. He's been super responsible with the puck from the start and the effort was always there, but you could tell by a simple eye test he was starting to turn the corner in terms of aggressiveness & confidence despite a lack of consistent results. Expecting a Svechnikov-like resurgence next season might be heaping another year of unrealistic expectations on the kid, but very few teens dominate the NHL from the jump. We're a LONG way from any sort of "bust" label and I fully expect Kakko to kick off next season with another top-six opportunity.

As far as Lemieux re-signing, why wouldn't he? As an RFA the Rangers would simply have to let him walk - no shot they do that. He's under team control for a few more years and even though he's arbitration-eligible, he's got no leverage. At the very least he'll be bargain-bin sandpaper with upside. This past year was his first with consistent minutes (although he was all over the lineup) so there's reason to believe he can produce a little more. And yeah he's gotta work on his discipline but Pepe still drew more penalties than he took. That's a true agitator and every contending team - especially a young one - needs a guy willing to mix it up with anyone.

Who are some potential players to target via FA/trade this upcoming offseason??

Last summer was the summer for wheeling, dealing and signing. They invested $20M over 7 years in Panarin & Trouba (who they flipped Pionk and a spare first-rounder to acquire as an RFA). This summer should end up being pretty boring. They're set between the pipes with Shesty & Georgie (who they're not moving - they'll trust him to back up Igor). They're loaded on defense in the system to replace Staal & Smith after next year and will be banking on the likes of Chytil, Kakko & Kravtsov to cement their names among top forward options. The only significant free agent action will be what the Rangers do with their own guys. DeAngelo tops that list (does he sign long-term, go the bridge route or let arbitration decide his annual price) but Ryan Strome is right there too in his final RFA year.

The biggest off-season news though will be the buyout of Henrik Lundqvist. There's no chance he either sticks around wasting another year as the third wheel or hangs 'em up with 2019-20 being how his HOF career ends. It's not a disrespectful move - when it happens, it'll be because the King rightfully asked to leave the kingdom.

When is Morgan Barron signing ? If he goes to his senior year, do you think the rangers will lose him as a UFA?

Is there a common concern that Morgan Barron won't sign? I haven't heard it & can't imagine a better spot for a big, versatile two-way center than the pivot-starved Blueshirts. The Rangers 2017 6th round pick had a hell of a junior year at Cornell. Checking in at an NHL-ready 6'3 217, the Big Red captain raked in a ton of collegiate notoriety capped with ECAC Player of the Year & a top-ten Hobey Baker finalist. He's billed as a coach's dream & been groomed in a program that preaches defense first.

How his offensive game translates to the AHL/NHL remains to be seen, but he's led his team in goals and points the past two seasons while making a conscious effort to get pucks to the net. With sixth-round picks though, you're not expecting the moon. If you net yourself a responsible bottom-six forward that can contribute in the show, you hit a home run. That's what Barron can eventually be and I'm confident he'll eventually start that path in the Rangers organization, regardless of whether or not he returns to Cornell as a senior.

There's no telling which of the many defensive prospects in the Rangers system will pan out. The odds are high with Miller & Lundkvist but there's other solid options in Robertson, Jones, Reunanen, Rykov and even Hajek who all still have potential to round out a top-six at the very least. The roster locks though for the post-Staal/Smith era ('21-'22) will be Trouba, Fox & Lindgren with one looming question mark in Tony DeAngelo. Regardless of whether or not Tony signs long-term, he's still under team control for three more seasons. The Blueshirts will, at the very least, leverage that control to keep him aboard until they're confident enough in their prospects to move on.

It's easy to write Fox/Lindgren in Sharpie for the foreseeable future, but I might shake it up a bit. I don't think there's any doubt Adam Fox is gonna be an all-around superstar real quick. Let's not forget the rookie was first paired with Marc Staal and still had some success. I love the chemistry he and Lindgren are developing but I genuinely think Fox can play with anyone. You know who seemingly can't? The $8M man Jacob Trouba. I'd like to see him paired up with Lindgren who can play his same stay-at-home role while Troubs opens it up a bit more.

Assuming Lundkvist is on the squad for 2021, they'll be overloaded on the right - but DeAngelo has experience playing his off-side and, with left being a glaring weakness, that's the best way to get him as much ice as possible. Find me a more potent young D pair than Tony & Foxy's combined 95 points (4th and 15th among all blueliners) in an incomplete year. K'Andre will all but certainly be ready by then, so give me a Miller/Lundkvist "pairing of the future" to round out the back end & hope they gel like Fox/Lindgren did.