So these pick 3 challenges (?) are going around Twitter like crazy right now because the world has reached peak boredom. The sad thing is that there's no end in sight to them, either.  But I saw this one come across my timeline today and was appalled:

And I was appalled because there's only three right answers.  Let's break em down:

A no fucking brainer. If this isn't an obvious selection for you, you're probably a raging blue checkmark lib that is outraged because "The Beast" wasn't portrayed as an English Mastiff that self identified as a golden retriever or something.

The Sandlot is one of most quotable movies ever. 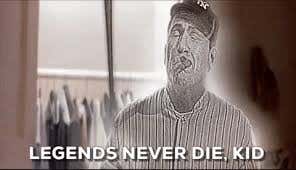 Just an unbelievable movie that perfectly encapsulated what should be every 12 year old kid's first love, baseball.  Goddamnit what a flick. The Ray Charles scene still gives me chills to this day:

I just hate that I learned that Smalls (allegedly) turned into a meth head unfortunately, at least says some caller on Barstool Radio a few weeks back.

Next up is another easy one:

Just a rag tag group of grinder ballers. This team really reminds me of the 2005 White Sox; didn't necessarily have the best talent on the field, but nobody could question their heart, hustle and TWTW.  That, and Lou Brown was a great leader of men just like Ozzie Guillen. Kept the clubhouse loose, wasn't an ego trip or power stroke and had an uncanny ability to get the best out of his players.

That, and we had peak Chuck Sheen. I dare you to not get the willies when he enters the game to like 50,000 people to Wild Thing:

Oh, and apparently Chuck Sheen was actually throwing upper 80s in the movie. And don't forget about our favorite drunken announcer, Harry Doyle:

Vaseline ball swung on and grounded to short!

And last but certainly not least, we have…

Incredible portrayal of how Billy Beane and his team of statisticians changed the game (for the better) forever. It was nominated for 6 Academy Awards, including Best Picture, Best Actor for Brad Pitt and Best Supporting Actor for Jonah Hill. Sure, there are a few differences between the book and movie, but in the end it doesn't change its thesis.

One cool nugget in Moneyball was that they used real, actual former pro ball players and minor leaguers to portray the players in the game scenes in attempt to make the game play look as real as possible, which anyone can appreciate unless we're talking about Eastbound and Down where it's meant to be really, really bad.

But the scene with Scott Hatteberg walking it off for the A's 20th win in a row? Once again, chills chills and more chills:

and then the real thing:

And there you have it, the three best baseball movies ever created.

Now I know what you're thinking: "WSD, taste in movies is subjective and people might have different lists you werewolf loser!" and to that I'd say "suck my dick they're wrong".

Now I do like a few of the other movies on the list, but rules are rules, can only pick three. For instance Rookie of the Year is a cute movie and Henry Rowengartner post injury reminds me of me, but with that said, if "Little Big League" is on your list you should be committed to an insane asylum and have a lobotomy forced on you because your brain flat out sucks.

PS - no, Kevin Costner, I don't want to "have a catch". I don't know what the fuck that means. I'll "play" catch, sure, but I'll never "have" a catch because you can't physically do that.