[Note: Tom Brady hates strawberries and refuses to ever eat one.]

In the course of human events, there are certain interviews that go down in history and are remembered forever. Richard Nixon talking Watergate with David Frost. Michael Jackson discussing sexual abuse allegations with Oprah. Monica Lewinsky and Barbara Walters chatting about Oval Office blowjibbers. Al Campanis explaining his theory of racial inferiority to a gobsmacked Ted Koppel. And so on.

Yesterday's epic, two-hour conversation between Tom Brady and Howard Stern was just such an interview. Howard got Brady to open up and show parts of his personality he kept to himself over 20 carefully guarded years in New England. And in doing so, put a punctuation mark at the end of his Patriots career. Whether it happens to be an exclamation point or a question mark is entirely up to the individual listener, I suppose. For me, now that I've had 24 hours to think about obsess over it, there are three key things he said that are the big takeaways. Besides the story about the time his testicle was the size of an orange, I mean. But that goes without saying. Those things are:

--On his relationship with Belichick: "I think he has a lot of loyalty. He and I have had a lot of conversations that nobody has ever been privy to, nor should they be, that so many wrong assumptions were made about our relationship or about how he felt about me. I know genuinely how he feels about me. Now I'm not going to respond to every rumor or assumption that's made, other than what his responsibility as coach is to get the best player for the team -- not only in the short term but in the long term as well. ... I got to the point where I was an older athlete and he's starting to plan for the future, which is what his responsibility is. I don't fault him for that. That's what he should be doing. Not that I would ever coach, but if I was ever in a position of authority, I would understand that too."

--On Gisele and his skipping OTAs: “There was a couple years ago, she didn’t feel I was doing my part for the family. She felt like I would play football all season and she would take care of the house, and then all the sudden when the season would end, that I’d be like, ‘Great, let me get into all my other business activities. Let me get into my football training.’ And she’s sitting there going, ‘Well, when are you going to do things for the house? When are you going to take the kids to school and do that?' ... “She wasn’t satisfied with our marriage. So I needed to make a change in that.”

--On when he knew it was time to go: "I would say I probably knew before the start of last season that it was my last year. I knew that our time was coming to an end."

Add these three comments together and they can only add up to one logical conclusion. Gisele Bundchen broke up the Patriots. The reason the greatest quarterback and the greatest coach in history are no longer together, relentlessly pursuing a historic seventh championship side-by-side is because she Yoko'ed the Dynasty.

Yoko (yo'-ko). verb. The act of a woman controlling a romantic partner and convincing him to break up with his male friends and/or coworkers.

The term obviously is named for Yoko Ono, who caused the greatest band that ever existed to split a mere seven years after they first hit the charts thanks to her meddling. This succubus so burrowed her way into John Lennon's cerebral cortex that she was able to get him to put this on The White Album:

That's 8:22 of non-musical noise and atonal mumbling that has never once been listened to by anyone other than John, Yoko, and pubescent boys forced to listen as a rite of passage in order to be declared men by their tribal elders. I'd like to note here that it's common for people who prefer John over Paul McCartney to paint Paul as some sort of a syrupy, whimsical, ballad-writing sap. But that if John hadn't been horribly cut down by an assassin's bullet in 1980, he'd have spent the last 40 years writing more dreck like "Woman." But I digress.

Anyway, it should be painfully obvious that the motivating force behind #Braxit was 100% Gisele. That Brady is every bit the competitor we've always believed he was. To the core of his being. A man who is still damaged by the fact he was drafted behind Tee Martin and Spergon Wynn and a goat farmer named Giovanni Carmozzi, to the point where even six rings can't fill the hole in his soul. That can only be done by a pyramid of skulls from all the people who have wronged him, which is everyone on all the other NFL franchises. But he was forced to change that integral part of himself in order to keep the peace at home. Happy wife, happy life and all that.

I mean, it's not like the writing hasn't been on the wall for some time now. Three years ago she went on with America's favorite old pervert, who managed to stop forcing interns to look as his sagging scrotum long enough to get Gisele to say Tom had a concussion the season before.

Since the Patriots had never listed him on the injury report for a concussion and he never missed a snap for one, you just knew Brady was at home losing his shit like Henry Hill when his wife flushed all their blow down the toilet. "Why did you DO that KARRRENNN!!! That was all our MONEEEY!!!" Especially given he had just served a suspension over absolutely nothing and Ginger Satan Goodell was fresh off being humiliated by the Patriots' comeback win in the Super Bowl and just looking for an excuse to exact his revenge. If ever there was an example of a wife shaming her husband in public in order to get him to stop doing the thing he loves with the guys he loves to do it with, this is it. Then she followed it up in his "Tom vs. Time" series with all that stuff about how a person just wants to "feel appreciated."

And imagine for one second how this was playing in the coach's office at One Patriots Place. In Brady's own words, all those reports about the "rift" between him and Belichick - the Pliability War allegedly fought over Alex Guerrero, the upset over Jimmy Garoppolo, his supposed anger over Antonio Brown getting released - were all just "so many wrong assumptions." Whatever friction he was dealing with wasn't coming from him or his coach, it was coming from his wife. But it was Belichick who was left having to deal with it. Having to prepare for another season in which his team will once again be the biggest game on the schedule of every team they face. And suddenly the hardest worker in league history - the who won the coveted parking spot reserved for the biggest participant in the offseason program as a rookie and didn't relinquish it, and whom even Rodney Harrison could never beat to the gym - is skipping all non-contractually obligated practices. So Belichick was forced to spend OTAs with backups and answering questions about why his franchise player wasn't there. All so Tom could help fold laundry and pack the dehydrated algae and spirulina into the kids' school lunches.

And so the decision was made. A long time ago. Before Brady's contract talks last year. He went into them knowing the Mrs. wanted out. Out of Foxboro. Out of New England. Which is why his agent left money on the table in exchange for an out clause and no Franchise Tag. Presumably she wanted Tampa all along as well, knowing she'd get it. Especially as Jameis Winston played his way into unemployment with 30 interceptions and seven pick-6s. So while Patriots fans spent all of 2019 and early 2020 hoping he'd stay, there was no hope. She had seen to that. Mentally and emotionally, they had checked out. Given their 12 months notice. Brady wasn't staying without breaking up his marriage. The die was already cast. She knew it. He knew it. Even if New England and the Patriots themselves didn't. From Ian Rapoport:

“To my knowledge they did not know he was officially and definitively moving on to another team until he showed up to Robert Kraft’s house.Based on the people I have spoken with, they were still holding out hope that Brady would decide to say to them, ‘Yes, I want to stay in New England’ and engage in some sort of contract discussion, anything to give them an inclination he wanted to be there. That is still what they were waiting for until Tom made his announcement that he was officially moving on from them.”

Look, I'm not even mad. I get it. We've all seen it happen to guys we otherwise like and respect. Where his wife will take away the thing he loves because she doesn't love it. Golf. Gambling. Drinking. Name it, some significant other has taken it away. I used to know a friend of a friend who asked us to stop calling him by his nickname because his girlfriend of like one month didn't like it. It's like the Tracy Morgan character said in "30 Rock." Some women make you stronger, others are Delilahs to your Samson. Like in that movie he watched.

It took years of doing. Millions of hours watching her husband succeed at doing what he loved in a region of people who adored him, bought his merchandise, named their kids and pets after him and would gladly donate one of their organs to him if he asked for it. But in the end, she was successful in breaking it up. All we can do is be grateful it took so long. And look forward to Mrs. Jarrett Stidham liking it here more than Gisele did. 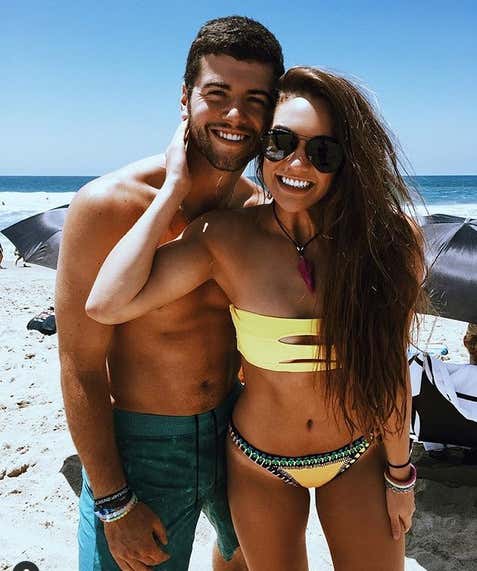