We're coming up on a month in quarantine. This past Wednesday marked 4 weeks since the NBA shut down and a day after that NCAA and every other sport in the world seemed to be done. It got me thinking though, what have I learned during this time? Well besides that time is actually irrelevant in quarantine. You can tell me it's any day of the week and I'll believe you (except Wednesday when The Challenge is on).

So with that in mind, this is everything I've learned during a month in quarantine. Let's start with the obvious.

Yeah, self explanatory. No NCAA Tournament was someone just repeatedly kicking me in the dick while wearing spikes. I think I speak for everyone on this one. We all miss sports. Just had to start with it.

- Baby gates are impossible to open

I have a 7 month old son (thank you for congratulating me on the sex.) and he's starting move everywhere. Dude is just crawling all over the place, trying to keep up the pooches. So we put in a baby gate from our dining room to the basement - where I work, hang out and is my man cave. I spend hours upon hours down here. But you know what? Baby gates are fucking impossible to open as a parent. I don't care what you say, they aren't easy. You need multiple hands and shit. You have to lift one part, pull another part and then step aside so the gate doesn't hit you in the gut.

Seriously, people go nuts for Spiral Ham. I find myself tuning in every time Dan goes live to see if this is the time Spiral Ham can get a win. It was like watching Chris Davis try to get a hit to start last season.

- Dogs really got life figured out

I guess I never realized how much dogs have life figured out until this. I have 2 pooches - a monster Chocolate Lab and a 17-year old miniature wiener dog. You know what they do all day? They sleep and then they go eat the food the baby throws at them/drops on the floor, then they go apeshit happy when we go for a walk. Really we're just dogs now.

- I have no idea how to correctly use Netflix

I like to fancy myself as someone who is great at watching television. You want someone with the remote with the game on the line? I'm your guy. No one knows the last channel button better than me. No one knows how to time up leaving the game right before the commercial break, going to another game and getting back without watching one commercial. No one knows how to command the 3 TV set up I have in my basement. That said, I have no idea how the fuck to use Netflix and I've never felt more like an old. I just scroll. I can't find anything new. I just turn on the same shit over and over again. How does everyone else do it?

- Kate is a modern day Picasso

But I called her Picasso not Bob Ross. Kate is going insane. I'm 100% worried about Kate more than 99% of the people I know. Why? Kate is the best but also I'm concerned that she's starting to think this is normal: 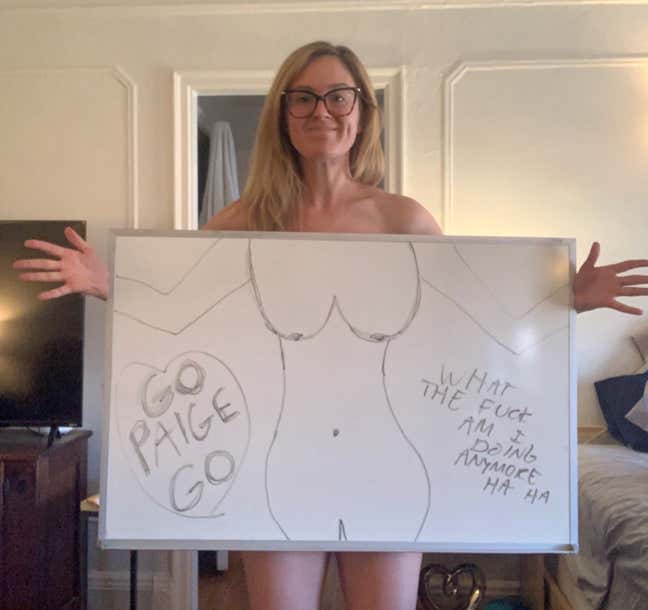 You know what is the most fun thing in the world? Getting presents. Fuck you if you don't think so. It doesn't matter how old you are, there's a thrill of unwrapping something and having no idea what to expect. Maybe that's why people call sex fun? Anywho, I've never been more jealous of Dave (except for the wealth, fame, hair* and everything else) that I am watching him unwrap gifts FOR HOURS every night. I get one Amazon box shipped just for a month and it's fucking awesome. This just looks like the most fun someone can have in their 40s.

I can't imagine a quarantine without Twitter. Sure there are morons on there, but there are morons everywhere. That said, you can put out one question, one take, one whatever and get interaction. That my friend is a top-10 invention along with the likes of air conditioning, the remote, television, alcohol and basketball.

Clicks lock on my car just in case, even though Chaps had his truck stolen with the door locked.

I need a manhunt for Chaps truck more than anything this weekend.

Just go ahead and click through that thread. I'm confused as to why or how Clem has this many different costume items. I know he has 2 kids, but they are kids and this is 100% what Clem owns for himself. Listen, there's not a nicer or jollier guy in the world than Clem. I'm officially terrified of him. You can't trust a Mets/Knicks fan that owns that much costume gear. You just can't. Must be why he lives North of the Wall.

- Carl continues to be a modern day Billy Joel

- If Brandon is the 73rd ranked employee, I HAVE to be ranked 74th

I didn't realize this website had such an anti-SEC bias. The hell is up with this? All I know is if Brandon Walker is the 73rd best employee at Barstool I'm the clear option for 74th. Credit to me for crediting Brandon Walker with the 73rd spot. Should have said I was from Boston, that's on me. That's how you get in the house. Typical anti-SEC propaganda.

- Who knew ceiling fans could be used in mental warfare?

Keith is one of the smartest people I know, just ask him, but then again he doesn't know people I know. There's a reason why when Keith would fire up a blog attacking someone who attacked Barstool it was must-read. The dude just has a way with words to twist a knife that sticks to you. He's also petty and loves passive-aggressiveness (his words in the tweet). The man is using a ceiling fan for mental warfare! A ceiling fan is one of the most delightful things in the world. It cools you down. It makes a nice soft sound to fall asleep to. It lets you know that spring/fall are really here. It's now a fucking weapon in the one of the most heated battles in apartment life I've ever witnessed. Life lesson: don't piss Keith off if you live above him and don't like vibrations.

- The next time we get quarantined, just go to one of the nicest golf courses in the world and they can't kick you out

Damnit, I wish this was one of those times that people messed up the whole Reags/Riggs thing like when Riggs was writing politics and I'd get tweets yelling at me about a war. I just assumed they were a Kansas or Missouri fan and boy was I wrong. Nobody has figured out quarantine life out more than Riggs. The man went to Pinehurst and has been there for what appears to be the entire month of March. He's just golfing one of the most iconic courses in America. It's like he went to Harvard or something and was a step ahead. Speaking of a step ahead

Donnie finishes second in quarantine life figured out. The man took a random DM from a Stoole and parlayed it into being in the Bahamas. THE BAHAMAS! Seems like a fun place to be! All I get is DMs asking why I hate that person's favorite college hoops team. I really need better fans* (*a fan)

- I need to visit Large's house

I'll be honest - I want to live with Large. I'll get educated on Wall Street (I WON'T day trade) and random history facts. We can talk about old school college football. But you toss in that bar? Urinals! You know how much I'd prefer to piss in a urinal instead of a regular toilet?

- We all just revert back to being a teenager during quarantine

Last and not least, this is the best goddamn place at the world. Look at those examples I used of what I've learned about everyone. You know where else you get that? NOWHERE. Shout out every person working here. Shout out everyone reading, watching, following along. We're going to get through this shit together and we'll throw in sports to this ridiculousness soon. It was known before this quarantine that we are different at Barstool and better than everyone, but it's just shining now.

Here's to another weekend of ridiculousness online.