As I was scrolling through Twitter last night, I got a notification that I was tagged in a tweet. But I wasn't the only person tagged. A college student named Cormac had an essay on the history of Barstool dude at 2:30pm and wanted some advice from all of the OG employees. First of all, have you ever met someone named Cormac? It's a pretty dope name if you ask me. Anyways, nobody responded or liked the tweet in 4 minutes, so he tagged the rest of the gang.

This trio right here is déjà vu and I can explain that in a second.

As soon as I was tagged, my first instinct was to like the tweet and show some support, but I hesitated. Not one of these 100 accounts responded with anything. Is this a prank? Does the first person to reply to this get in deep trouble? "Should I be that guy or should I like this tweet in spirit?' I asked myself. This was all over my mind and I had to sleep on it. Later today, I knew I had to do the right thing and reply to Cormac.

And guess what, it was all worth it. I made the front page of Cormac's PowerPoint baby! 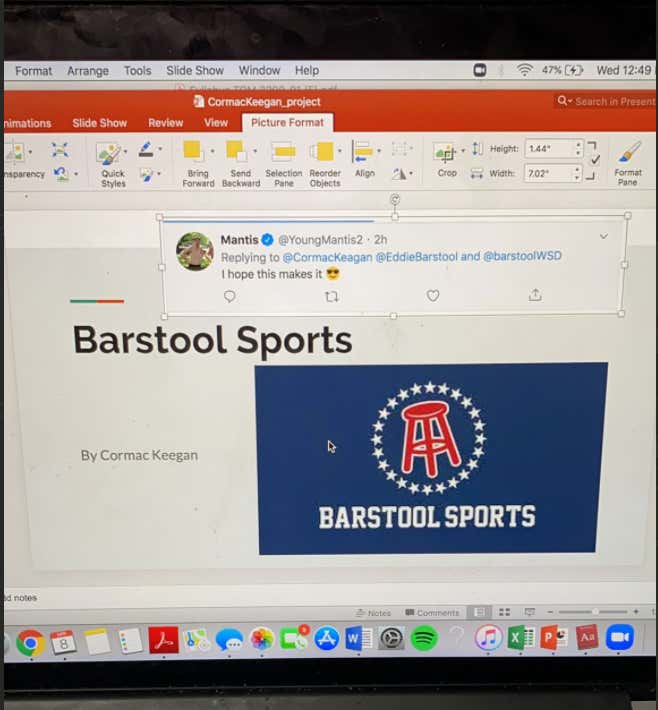 After seeing this, some may say I'm the face of Barstool (absolutely not). Some may say I'm the body of Barstool. If we're comparing my actual body and the Barstool Brand, they're both very unique so I'd debate that. I just hope he aligns my tweet under the white background so half of it doesn't get cut off during the presentation. Congrats on graduating soon, Cormac! Oh, here's where I got deja vu from.

You win an eternity of consistent losses in Call of Duty Warzone, Kyle. Thanks for playing.