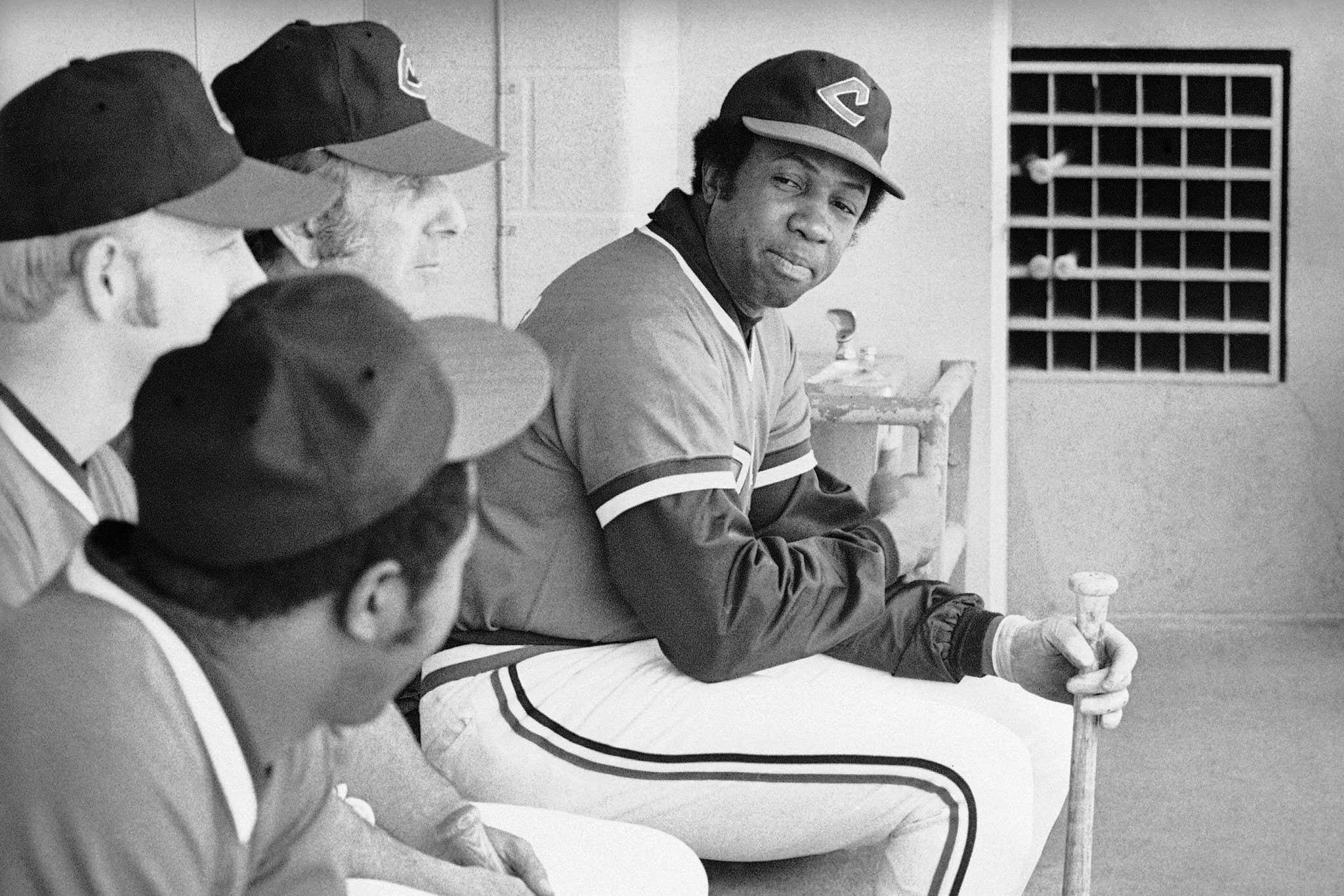 Opening Day at Municipal Stadium takes on great significance, as Frank Robinson becomes baseball’s first African-American manager. Leading the Cleveland Indians, and remaining an active player Robinson batting second as the Designated Hitter, Robinson hits a home run in the first inning, as the Tribe beat the New York Yankees 5-3. Frank Robinson would remain a player until the end of the 1976 season. He would manager the Tribe for two and half-season, with a record of 186-189.

Frank Robinson was born on August 31, 1935, in Beaumont, Texas, and raised in Oakland, California. A star in baseball and basketball, Robinson was a teammate of Bill Russell, Vada Pinson, and Curt Flood in High School. Scouted and signed by the Cincinnati Redlegs, Frank Robinson made his debut in 1956. That season, Robinson hit 38, setting a record for rookies on the way to winning the Rookie of the Year. Five years later, Frank Robinson helped the Reds win the National League Pennant and was named MVP.

In 1966, the Reds wrote off Frank Robinson and sent him to the Baltimore Orioles for Milt Pappas, Jack Baldschun, and Dick Simpson. Robinson proved the Reds wrong by winning the Triple Crown, American League MVP and leading the Orioles to a World Championship. In 1971, Frank Robinson joined elite company when he hit his 500th home run. It would be Frank Robinson’s final season in Baltimore, as he was traded to the Los Angeles Dodgers in 1972.

After one season with the Dodgers, Frank Robinson was sent to the California Angels, becoming one of the original Designated Hitters. He played nearly two full seasons with the Angels before being traded to the Cleveland Indians in September of 1974. The Indians acquired Robinson with the intent to make him the team’s manager in 1975.

The Indians posted a record of 77-85 under the leadership of Ken Aspromonte in 1974. After the season, they decided to name Frank Robinson as the team’s manager. By 1974, there was a small groundswell to appoint a black manager. Just weeks before he died, Jackie Robinson, prior to the 1972 World Series, expressed his wish to one day see an African-American getting a managerial job.

Frank Robinson called upon Gaylord Perry to make the start on Opening Day, while Doc Medich made the start for New York. Batting second, Robinson hit a home run in the first inning to give Cleveland an early 1-0 lead. The Yankees answered with three runs in the second, as Chris Chambliss had a two-run double and scored on a single by Thurman Munson. It would be only runs that the Yankees would score, as Parry went the distance, allowing nine hits and striking out six. The Tribe got a run back in the second inning, as Boog Powell scored on a sacrifice fly by Jack Brohamer. In the fourth inning, Powell homered to tie the game 3-3. Boog Powell, the offensive star of the game, doubled home a run in the sixth to give the Indians, later scoring on a single by Brohamer. The Indians would win the game 5-3, making Frank Robinson’s managerial debut a success.

The Indians finished the 1975 season in fourth place, with a record of 79-80. Frank Robinson would retire as a player in 1976 with 586 career home runs, ranking fourth behind Hank Aaron, Babe Ruth, and Willie Mays. In his second season as manager, the Indians posted a record of 81-78. In 1977, Frank Robinson was fired on June 19th with Indians in fifth place at 26-31. Robinson’s record in Cleveland was a pedestrian 186-189.

After getting fired, Frank Robinson spent the end of the season as a coach on the Angels. From 1978-1980, he served as a coach on Earl Weaver’s staff in Baltimore as Larry Doby became the second black manager with the Chicago White Sox in 1978. Frank Robinson would get a second managerial opportunity in 1981 with the San Francisco Giants, becoming the first African-American manager in the National League. He would hold the managerial job in San Francisco for three and a half seasons, getting fired in 1984, while posting a 264-277 record.

Frank Robinson would be named the manager of the Orioles in 1988. At the time, there had just been four African-American managerial tenures; three of them were held by Frank Robinson. Robinson would be named Manager of the Year in 1989 as he posted a 230-285 record in four seasons in Baltimore. Frank Robinson’s final managerial tenure came in 2002 after serving in the Commissioner’s Office. He was named manager of the Montreal Expos, leading the team for three years before they moved to Washington. He continued on for two more seasons with the Washington Nationals, retiring in 2006, with an overall record of 1065-1176.