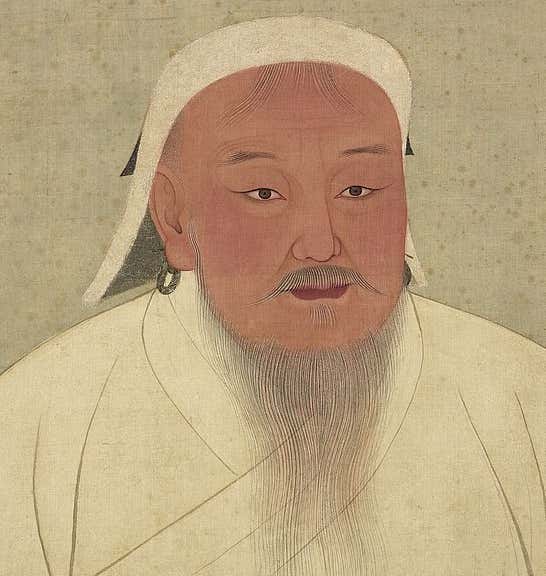 Did you know about Genghis Khan?

He was the founder and Emperor of the Mongol Empire, which became the largest *contiguous empire in history after his death.

Known for the brutality of his military campaigns, Genghis Khan is considered by many to have been a genocidal ruler. However, he is also credited with bringing the Silk Road under one cohesive political environment. This brought easier communication and trade between Northeast Asia, Muslim Southwest Asia, and Christian Europe, expanding the cultural horizons of all three areas.

From The New York Times:

The survey was conducted by Dr. Chris Tyler-Smith of Oxford University and geneticist colleagues in China, Pakistan, Uzbekistan and Mongolia. Over 10 years they collected blood from 16 populations that live in and around the former Mongol empire.

They find that as many as 8 percent of the men dwelling in the confines of the former Mongol empire bear Y chromosomes that seem characteristic of the Mongol ruling house.

If so, some 16 million men, or half a percent of the world's male population, can probably claim descent from Genghis Khan.

They found that a cluster of Y chromosomes carried a genetic signature showing they were closely related to one another and to a single founder chromosome in the recent past. These signature chromosomes were far more common than would be expected by chance among most of the populations living within the former Mongol empire. But none of the peoples outside the empire carried the chromosomes, except for the Hazara people of Pakistan and Afghanistan, former Mongol soldiers who claim descent from Genghis Khan.

And you thought Antonio Cromartie has a lot of kids? Genghis fucked.

*contiguous means sharing a common border. I didn't know that, I almost corrected it to continues

Tomorrow, we discuss this and 'the butterfly effect' with guest co-host Jerry Thornton

- Napoleon could have been Italian