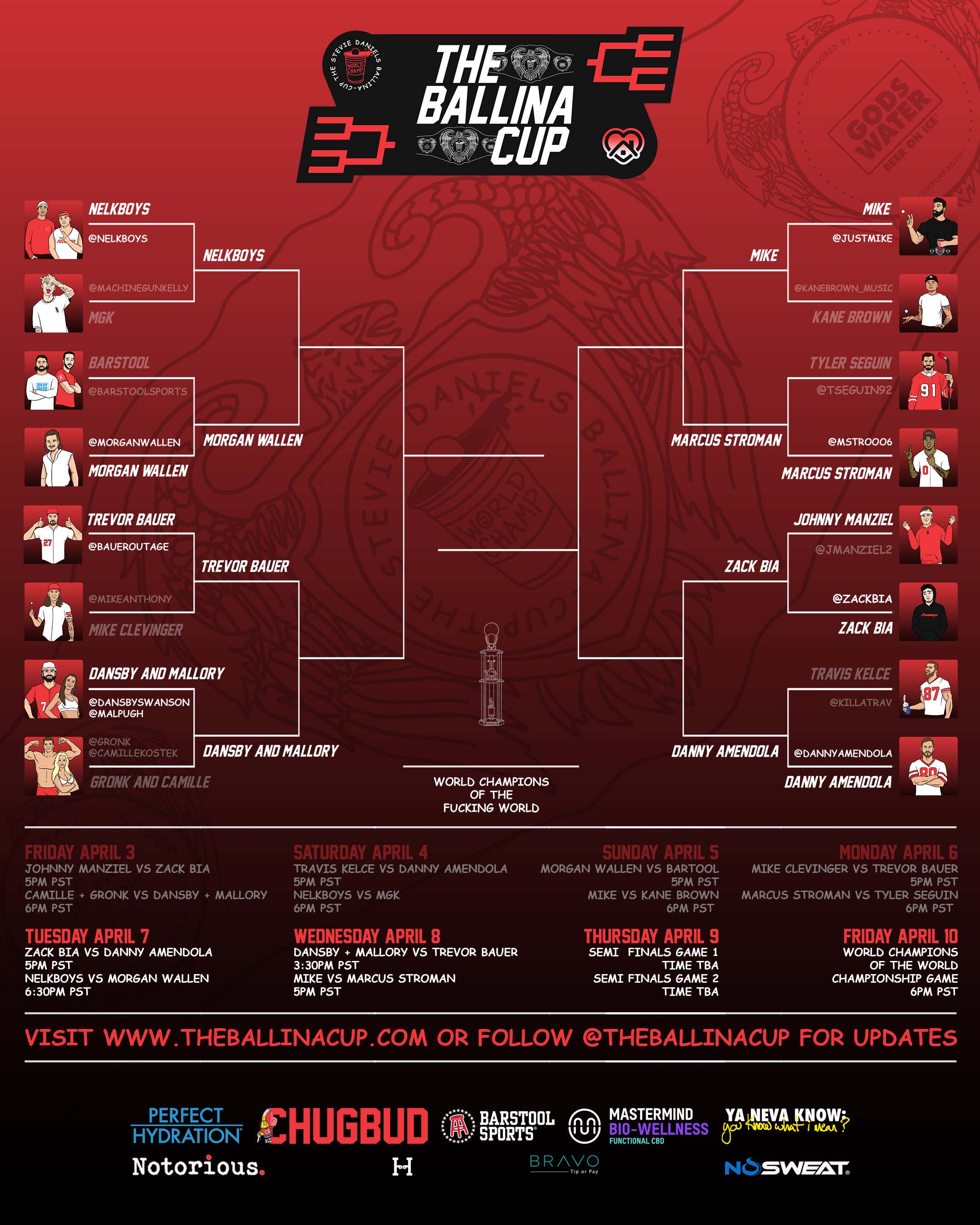 The inaugural Ballina-Cup Tournament is off to an amazing start. There are tons of storylines after the Round 1, including a disqualification, plenty of clutch shots, and more. Below is a recap of each Sweet 16 matchup, followed by previews of the quarterfinals, which take place tonight and tomorrow all across the country.

Nothing like some controversy in the first round of the tournament. After tons of back and forth clutch shots in Game 1, MGK eventually got the W... and then immediately signed off. the Nelkboys were confused, heck, everyone was confused. And then commissioner Mike set things straight, explaining that MGK had been disqualified after failing to complete the best-of-three series.

This was as close of a battle as it gets. Dana and Mush had their backs against the wall, Mush forced redemption in the winner-take-all Game 3, but in the end, Wallen kept showing off the clutch gene. A first round elimination is not how the gentlemen who work for the site this very blog is published on would have liked to go out, but shit happens. Back to throwing pencils into Pepsi bottles for Mush. Back to chugging beers for Dana.

Dave Portnoy was none too pleased

The big debate in this one was whether or not "Gentlemen's" was included in the two re-racks. After a word from the commisioner, it was decided that the official rule is two re-racks PLUS Gentlemen's is the official word. Trevor Bauer tried to explain this to former teammate Mike Clevinger, but in the end, it was Bauer who advanced anyways.

Gronk brought all the props out to this one. A mask to stay healthy, a cat mask, and most notably, a Lombardi Trophy to his postgame press conference (actually). But all of that did not faze Dansby Swanson and Mallory Pugh, who swept their way to Round 2.

The commissioner was "zero percent worried" heading into his tournament debut, and props to him, as Mike backed up his talk and took down Kane Brown. The most impressive part about his performance was that he called his game-winner just as "The Babe" did 88 years ago.

In this cross-sport matchup, it was baseball who took down hockey. After being traded to the Mets before last year's deadline, New Yorker Marcus Stroman continued his career on the mound in the city that never sleeps. There's a bigger spotlight in NYC, and Stroman brought that effort and focus to the Ballina Cup tournament, advancing in Round 1.

Johnny Football came out of the gate with an opening game win, but Zack Bia evened things up in Game 2. Despite being called out for playing on an extremely small table, Bia's table was still deemed legal. After a nationwide Instagram outage, Bia advanced while winning the third and final game.

The reigning Super Bowl Champ opened things up with a Game 1 statement, not only with the win, but crushing side beers like they were water. Amendola and Kelce went wire-to-wire with the trash talk, but in the end, it was the wide receiver to completed the comeback to advance.

Our first matchup tonight features the ole "Rest vs. Rust" debate. After taking down Johnny Football in the tournament's opening matchup on Friday night, Zack Bia has had the longest amount of down time among our eight quarterfinalists. He takes on Danny Amendola, who had an impressive victory over the weekend over reigning Super Bowl Champion Travis Kelce.

Did the Nelkboys earn their spot in Round 2? By the language in the rulebook and after a press conference from the commissioner, yes they did. To recap, MGK beat the Nelkboys in Game 1 of their match-up, but it seemed as if it was not universally known that the match was best-of-three, as MGK signed off. So, the Nelkboys are through to tonight's contest without winning a game just yet. On the flip side, Morgan Wallen certainly earned his spot in this quarterfinal round. Marty Mush and Dana Beers did all they can to pull through, but it wasn't meant to be.

This seems like it is going to be one of the most intriguing matchups of Round 2: baseball vs. baseball. On one end, you have Dansby Swanson and Mallory Pugh who took down Gronk and Camille in the opener. However, it was the very next day that Gronk claimed his first career WWE title. Was the former Patriot's head in the right place during this pong battle? We may never know. Dansby and Mallory's opponent will be recurring Pardon My Take guest Trevor Bauer. Will one of America's Pastime's top spokesman advance to the Final Four? We shall see.

Our final quarterfinal matchup features the co-founder and commissioner of the tournament: Mike. He takes on starting pitcher Marcus Stroman, who defeated a first round opponent that "has been playing beer pong since he was six" in Tyler Seguin. Will the current New York Met be the one to dethrone the man in charge of this whole entire tournament? Only time will tell.