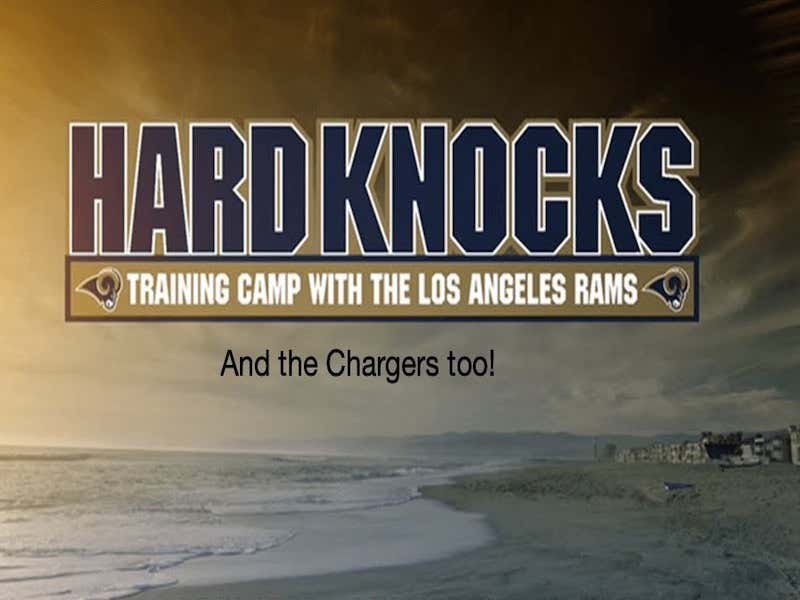 ESPN- For the first time, "Hard Knocks" is planning to supersize and feature two teams in the same summer: the Los Angeles Rams and the Los Angeles Chargers, league sources tell ESPN -- if there are training camps.

No announcement is planned this week, as the NFL and NFL Films are focused on the first virtual draft in league history because of the coronavirus pandemic. But NFL Films, which produces the show with HBO, would be excited to have not one, but two teams volunteer for "Hard Knocks," and it would, in the words of one source, "be special to figure out the creative for a 'supersized' series this summer. "

The announcement had been scheduled to be made at last week's NFL annual meeting, but the meeting was canceled due to the pandemic. NFL Films plans for the show go on, assuming training camp does. No one yet knows whether training camp will be a go this summer due to the virus, but NFL Films must prepare as if it will. Being stationed in Los Angeles will give NFL Films the ability to embed itself with two NFL teams, a concept the show has not tried in the past.

I think we can all agree this was the best case scenario for this year's Hard Knocks choice because I don't think most people around the country give a shit about the Rams now that Sean McVay lost the title of Football Genius last year and nobody in LA has ever given a fuck about the Chargers considering their stadium holds less than the amount of viewers watching Portnoy open boxes, with most of those fans sometimes rooting for the other team.

Don't get me wrong, this "supersized" Hard Knocks could have been incredible if we got a peak into the chaos that takes place in Phil Rivers' house every morning during training camp or it had never come out that the knives Aaron Donald trained with were fake.

Hard Knocks could have even used the Rams logo as the logo for both teams because that's what it pretty much already is.

And the Chargers having to share their first Hard Knocks season with another team is peak Chargers.

Instead, all Hard Knocks will be is HBO cameras filming people looking at their playbooks on iPads at home from 6+ feet away and talking about being stuck with the same people in quarantine. I guess one of those people would be Sean McVay's fiancee talking about how the coronavirus has altered their wedding plans, so things could be worse.

And Eric Dickerson ranting and raving about the Rams logo looking like a giant penis could be fun.

If only there was a hilarious free agent QB that knows the Rams playbook and could make Hard Knocks a Must Watch show again, even in quarantine times...

Fuck it, I'm in for Hard Knocks if the Rams bring back Blake Bortles more so because if I don't have this theme song in my life come August, nothing is going to feel right.