Don't want to do that, okay. I'll transcribe the important part.

Rogan: "How about name it after a cool Native American, would that be okay?"

O'Loughlin: "Yeah, yeah. That would be great"

Well guess which team name and logo is a representation of a cool Native American...YOUR Chicago Blackhawks. I wrote this blog originally back in 2017, but that was well before I was full time and Barstool Chicago's audience has grown a ton since then so I'll repost here now for the additional clicks. Here it is

The Blackhawks were formed back in 1926. The team’s first owner, Fred McLaughlin, fought in a Machine Gun Battalion during World War One named the “Black Hawk Battalion”. Advocates for the logo and name are sometimes quick to point to that fact be say “uhh its not even named after Indians, dummy. It’s not racist”, while ignoring the team’s Native American imagery that people take issue with. So lets go back and take a look at that Black Hawk name itself.

Black Hawk wasn’t a tribe or a group of people, but rather just one single man. This man 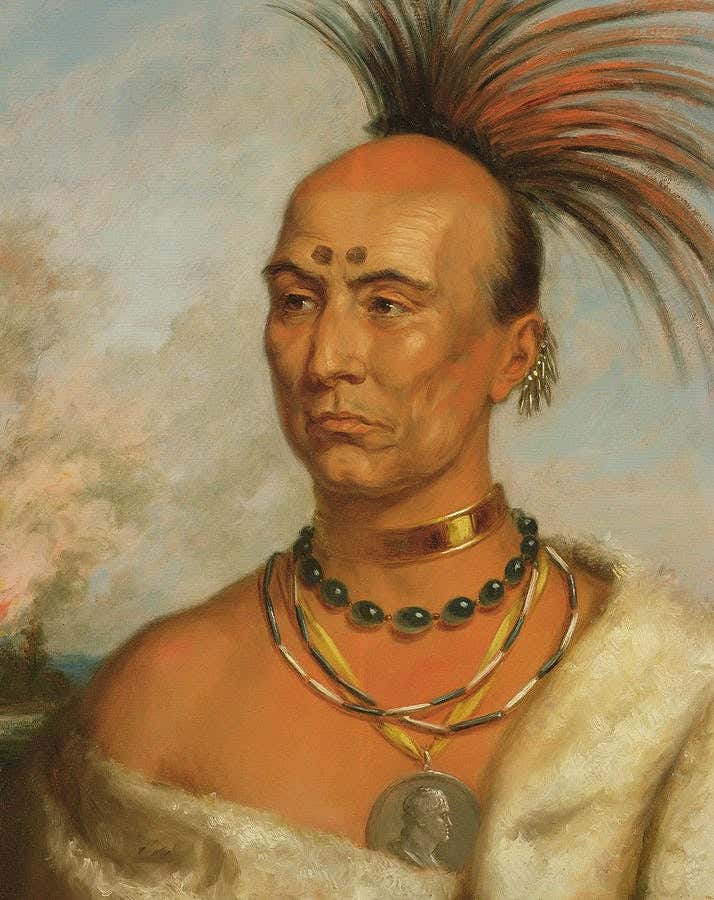 Chief Black Hawk of the Sauk people. The Sauks lived in Illinois and other areas in the Midwest until the early 1800s when they were forced to give up their lands to settlers and move west across the Mississippi River. The War of 1812 flares up and in come the British promising a sweet deal to the Sauks if they sided with the Crown. They did, the Brits won that war, but then they were like “thanks for your help, but we are back over here in England now and don’t really give a shit soooo…good luck in Iowa.”. Not much has changed on that front in 200 years. Nobody wants to live in Iowa when they can live in Illinois(no offense, Trent). Black Hawk was just stewing in Iowa for about 20 years until in 1832 he was like “Man, FUCK this shit. There’s nothing to do here. I need to be back in Illinois”. And so that guy picture above became a leader of a people. He crossed the Mississippi River to fight against the United States and white settlers trying to regain his land(where he was met on the battle field by none other than future President Abe Lincoln). Imagine trying to gather people to travel hundreds of miles to fight against a powerful military with greater numbers and better weapons just because you’ve been wronged. That’s what Black Hawk did. He is like an American William Wallace. And like William Wallace, he too was captured. President Andrew Jackson let him go, but was also like “hey, buddy don’t ever do that shit again”. And he didn’t.

The images above of Black Hawk show a magnificent looking fellow. Brave, stoic, and with a regal like quality. He stood up to an authority that he didn’t recognize and fought for justice and liberty for his people. That story of Black Hawk is a hero archetype. It’s an ideal that all Americans can look to and be proud of on some level. To me, that’s a person worth remembering and Native Americans are woven into the fabric of our history. It’s an ugly chapter in our history overall, so when there’s a chance to tip your hat to a man like this then I think we can and should.

That is the biggest difference between the Blackhawks name and logo and the Redskins and Indians. Redskins is name rooted in bigotry and the Indians logo is honestly a disgusting characture of a Native person. That’s not what the Blackhawks logo conveys. Much like the portraits above, the Blackhawks logo is an artist’s rendering of a proud and honorable Native American leader.

Another artist’s rendering of Black Hawk is this 100 year-old and 48 foot tall statue in Oregon, IL called “The Eternal Indian”. Here is Black Hawk looking over a river. 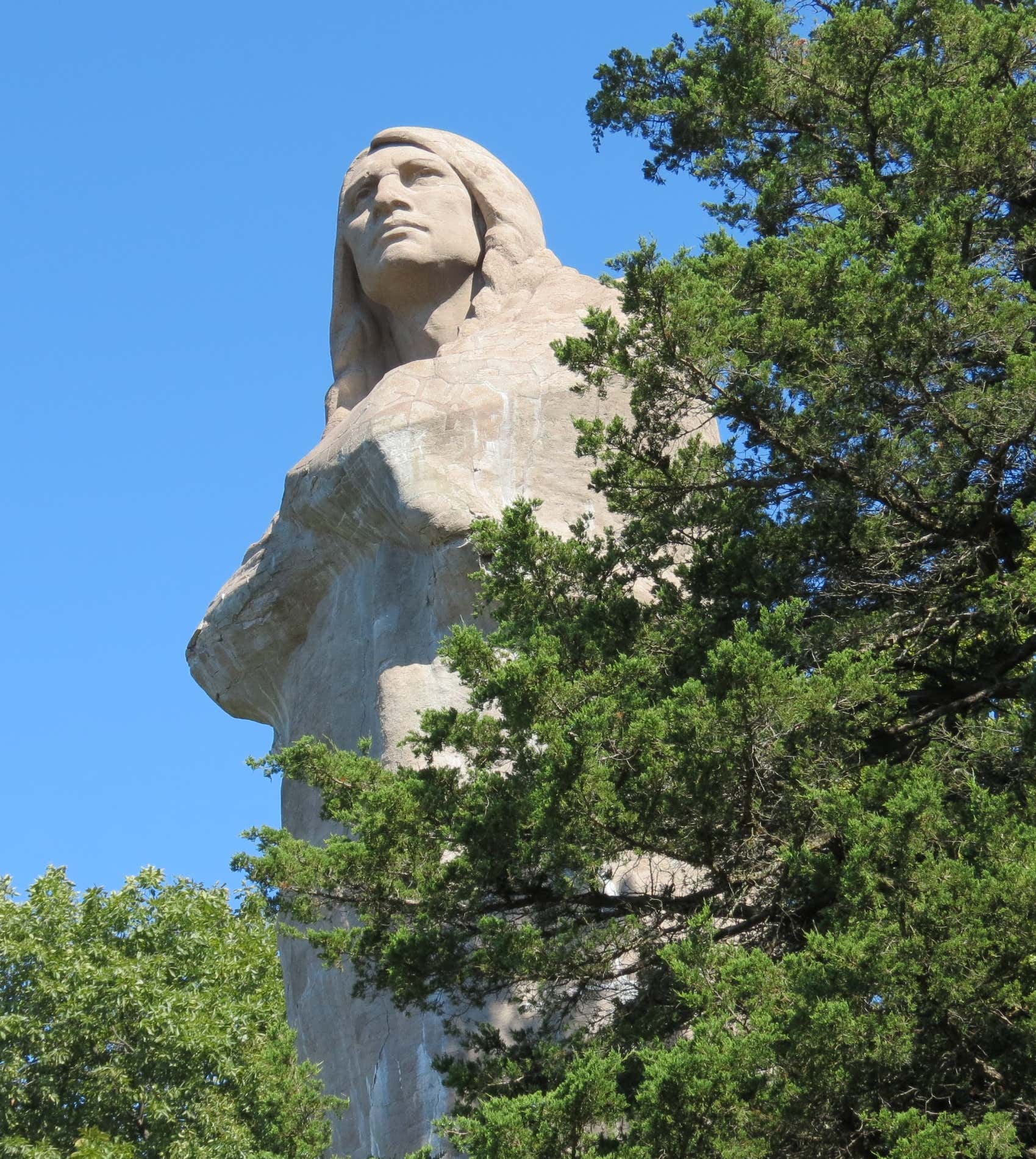 When people call the Blackhawks’ name or logo racist it almost feels like scene from The Office where Michael asks Oscar if he’d prefer to be called something less offensive than “Mexican” as if Mexican by itself were some kind of slur. Native American iconography isn’t a slur either. It’s how the iconography and history is used. If you want to belittle a people as being an unsophisticated savage or smiling red colored cartoon meant to poke fun at a people then that is not okay. What the Black Hawks are doing by memorializing an important man in the history of this region is very different. It can’t be lumped in with the Washington Redskins or Cleveland Indians. I would even argue that it’s not even cultural appropriation the way Florida State uses the Seminole name or how North Dakota used to use the “Fighting Sioux” nickname. Those schools profit off of a name of a culture. The Blackhawks are honoring one man. It’s a fine line, but to me it’s rather clear. The Blackhawks logo is regal just like the man it’s meant to depict. 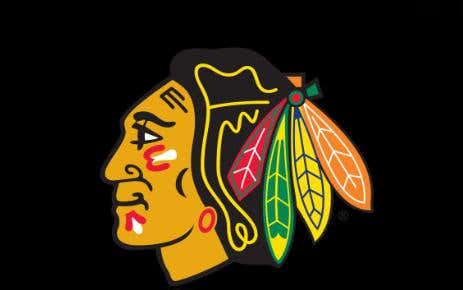