Some troublemakers behind the Viva La Stool account tweeted out possible Barstool Quarantine houses this morning. I can assure everyone that I genuinely did not have my hand involved in this. But I will take it upon myself to further break these houses down and imagine what might go on in them. As a bonus, I will also give my winner pick in case an impromptu game of Survivor breaks out in each house because of course I will. 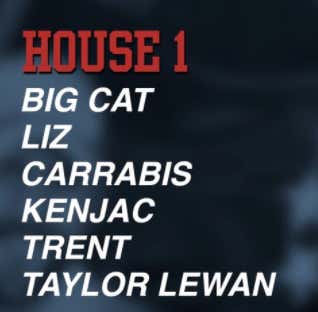 There could be some tension in this household. Liz may not have to ever wake up as a god damn Boston Red Sox fan, but she will have to share a house with the most notorious one there is: The Rocket. The good news is that if Liz and Jared ever do end up in an argument, both are totally not stubborn at all and will have absolutely no problem admitting that they're wrong.

Carrabis would also get into some debates with Taylor Lewan over who has the most impressive athletic accomplishments. The Rocket no-hit the Revere All-Star team. Taylor Lewan is a professional football player for the Tennessee Titans. Let's also not forget that Big Cat and Taylor Lewan have had some milld Twitter brush-ups in the past. Will The Cat's daily 20 push-ups and 20 squats be enough should he come to blows with an offensive lineman?

Elsewhere, Kenjac would probably spend most of his time perusing the dark web. And Trent would just quietly keep to himself.

A likable and affable fellow, everyone's favorite Iowan would find his way to victory with that Midwestern charm. 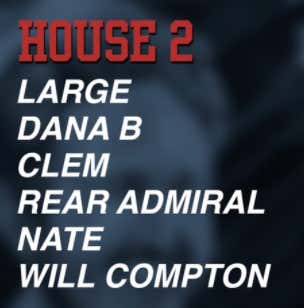 This would definitely be the household with the most substance abuse. Large and Dana B would bond over their alcoholism love of having a good time. RA would be doing whatever drugs RA does. And of course, known heroine addict Clem would be shooting up between his toes every single night.

Moving on from Zillion Beers and Zillion Grapes, Dana moves on to Zillion Whiskeys. Gets alcohol poisoning.

And I don't know much about Will Compton, but I'm just going to assume he's the type of guy that would spend his time bullying Nate, who would be in top spider-monkey mode out of pure boredom.

Like Trent, sometimes it's just the likable, quiet guy that gets it done. Clem won't step on any toes or betray any of his allies. 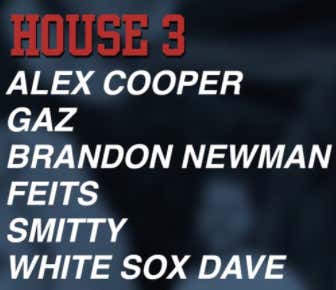 Gaz would immediately take it upon himself to become Cooper's personal cameraman and producer. Despite her continued persistence that she does not need his help, Gaz insists. "You can start your videos by saying like 'Alright Paulie' or something. I don't know, just spitballing."

In the battle of ultimate hardos, Smitty and White Sox Dave would constantly be challenging each other to new competitions every day. They would both somehow manage to lose every single one. Despite his D1 football background, Brandon Newman is not allowed to participate because they insist he's just not on their elite athletic level.

Feitelberg would spend every waking second of the day trying to escape.

I think she would be too intimidating to ever vote out. She's also not exactly facing off against the top minds of our generation. 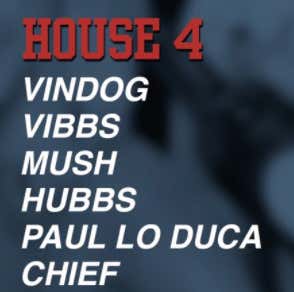 Everyone in this house would live in constant fear of the Vindog. He would be the ultimate alpha. Nobody would even think of getting on his bad side or disobeying his orders, as they'd have nightmares of getting meme'd to death in their own home. Vibbs would try to do Lowering The Bar, but Vindog would take over. Mush would attempt different Mush Madness challenges, but Vindog would get them all on the first try.

Elsewhere, Hubbs and Lo Duca would constantly be arguing over baseball and then immediately get personal. Paul would attack Hubbs' hairline. Hubbs would claim he has more rings (through fandom) than Lo Duca could ever dream of. Chief would probably be blogging about hockey.

I mean obviously. You think I wanna risk getting meme'd to death? Not today. Not ever. 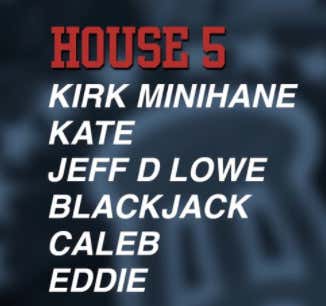 This would be the cleanest, most COVID-free house of all thanks to non-stop cleaning from Jeff D Lowe. Unfortunately for Jeff, Caleb and Eddie would be throwing the football around and wrecking Jeff's pristine toy collection. Jeff would raise his voice and yell "Gosh darn it! Enough horseplay!" If Jeff D Lowe drops a "gosh darn it" then that's when you know he's about to blow.

Kirk would try to instigate an argument with Kate, but she would both disarm and confuse him so much that she'd make it impossible even for Kirk.

Blackjack would kiss his picture of Paul Lo Duca before bed every night.

How the hell can anyone bring themselves to voting out Eddie? I also know Eddie is a sneaky, smart strategist who will make the necessary moves to get to the end before winning over the jury with that charmingly thick Chicago accent of his. 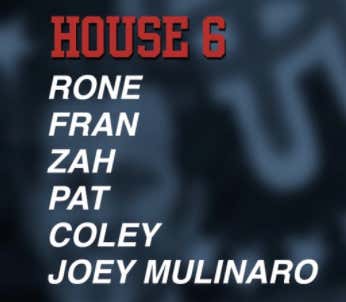 While this house may seem fun at first, it's actually one that would break your spirit. Out of boredom, Rone would ether you with his raps and pick at your deepest insecurities. Joey would constantly mock you with his pinpoint impersonations. Zah would threaten you with African curses should you wrong him. Coley and Pat would tag-team you with their under-the-breathe snarky comments. And don't even get me started on Fran, who everyone knows is the most ruthless bully in the office.

This would probably be the best game of all. I'm giving the nod to Zah. I don't think he'd be an immediate target off the bat. He's cunning and a solid strategist. He's also likable and can win over a jury. 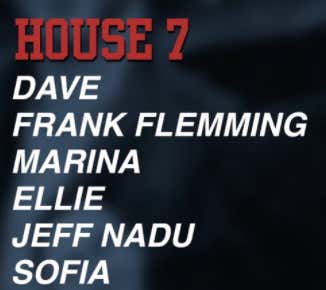 First of all, let's address the grave injustice that we're witnessing. Not only was Rico Bosco squeezed out of the list entirely, but his arch-rival Jeff Nadu gets a seat at the table with Dave Portnoy? Stunning.

Dave and Ellie would make one attempt a day to have a conversation that lasts more than 30 seconds but can just never quite get there. Sofia would somehow manage to not show up even against government orders, much to Dave's chagrin.

Luckily for Dave, he has his right-hand woman Marina and also one of his closest friends at Barstool: Frank The Tank. Frank will spend every waking hour singing a new song he made up.

I mean, what did you think I was gonna say? 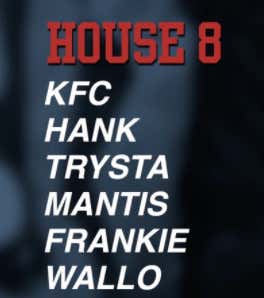 Frankie gets stuck with his best friend Mantis. Frankie just speaks to him all day with his Mantis impression, confusing everyone else around the house as they can never tell who's talking.

Mantis and Trysta would constantly argue over who has the better series: "Let Her Shoot" or "Bent." Meanwhile, Hank and Frankie would have an obviously awkward dynamic given their former/current relationships with Dave. Throw me in that house and we'd really have a catfight.

The house would run out of money and resources quickly. Trysta somehow managed to get catfished again, sending thousands to a Nigerian prince who claimed he had a vaccine for COVID.

Not wanting to deal with all of this, Wallo asks if he can actually be sent back to prison.

KFC continues to thrive in quarantine and refuses to leave the house once everyone else returns to the office.

Lockwood has become a master of adaption. From heir to the Taco Bell throne, to campaign manager, to being duct-taped to a wall, to the producer of the #1 sports podcast in the world. Hank is a shapeshifter of sorts who does what he needs to adapt and get the job done. A great attribute for Survivor. (This ended up being way too over-complimentary so just insert some generic insult about his chin or something idk). 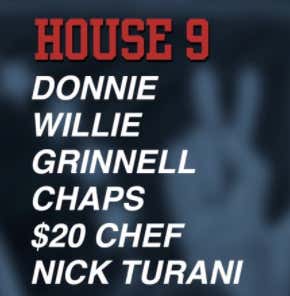 The Big 6. It's rare to go a day without catching this tight crew hanging out around the office together, busting each other's chops and sharing some laughs while they do their custom group handshake. With this group, the good times never end. Video games, drinking, feasts, and horseplay, the quarantine will only strengthen the already inseparable bond that these six share.

One of the weirdest brains out there, I trust Nick will employ some never-before-seen Survivor strategies that changes the game as we know it. 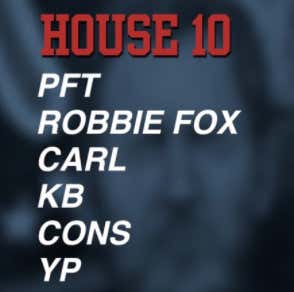 This house seems to be a fan favorite, and it's for good reason. There's really not much negative to say here. Should have replaced Carl for like Tyler O'Day or some shit.

This would be a thrilling game, but I think Robbie wins by process of elimination. PFT? Too big of a threat off the bat. KB? Can't maintain eye contact with anyone. YP? Would focus too much on the survival aspect rather than the strategic/social. Carl and Cons aren't in the office enough to have those tight bonds. So Fox pulls it out. 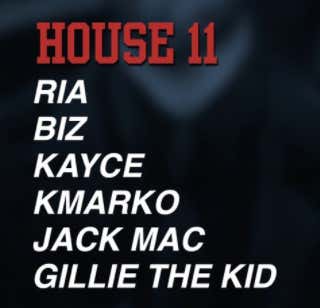 As Ria put on Twitter, this would instantly turn into everyone bullying Jack Mac. Maybe he's talking about his thoughts on nuclear bombs not existing or whatever his newest conspiracy theory is, nobody would have any time to put up with it during isolation. I think him and Gillie The Kid could have some particularly interesting political conversations.

Eager for revenge, Biz is mad he's with two girls and neither host Call Her Daddy. "They just need to let me go on the show one more time. I have so many good stories. I swear," he mutters to nobody in particular as he rocks back and forth.

Nobody hears from Kayce. She's locked away in her room determined to put on the greatest Quarantine thirst trap performance the world has ever seen.

A quiet assassin. The cerebral Keith will be a master strategist who's well connected. He can also threaten people to never post their blogs again. A winning combination. 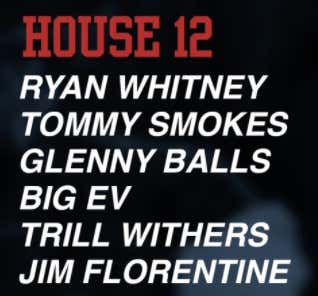 I'm not sure why, but something tells me this would be the greatest house of all. These are some great pals. I have grown particularly close with Jim Florentine.

Now will I make an easy joke here and say that we'd have a food shortage because of Glenny and Big Ev? Yes. Yes I will do that. Low-hanging fruit is still fruit.

It's pretty obvious how the relationship between Ryan Whitney and I would go. He'd bully me. A power struggle would emerge between us two mega alphas. I come out victorious.

Jim Florentine would complain about every little thing we do, while Trill would sit back and narrate all this action with that silky, smooth voice.

I would play the most dominating, cutthroat game Survivor has ever seen. I'd dominate strategically, socially, and physically. Nobody else would ever have a chance. I'd win unanimously and immediately be invited for a Survivor: Legends season.

And that wraps up how I imagine all 12 Barstool Quarantine Houses going down. The great thing about this is nobody was left off the list. Whenever someone makes something like this, it's inevitable that one or two people who should be included get forgotten. But not this time. They nailed everyone. Well done.