Confession: Ever since I put on arguably the worst boxing performance of all time a few years back, I've been a big fan of the sport. Getting into the ring and learning the basics gives you such an appreciation for what these guys go through as athletes. Not just the conditioning, but the technique. The ability to slip a punch and counter. The ability to calm your nerves, control your breathing, maintain your composure- all of it.  So when we had former WBO heavy weight champion Shannon Briggs in studio a few weeks back I was pumped. He's a 48-year old 6'4" 260Lb. behemoth with a bad temper. Check out this video of him running up on Vitali Klitschko in 2014.

What a psycho. Don't tell him I said that. He stopped by Breakfast to promote his bare knuckle boxing match, which is supposedly still taking place. I hadn't thought about it until yesterday when he posted this video on his IG.

Naturally, that sent me into a bare knuckle boxing YouTube hole and let me tell you, it was wild. How it's even legal is beyond me. It's basically felony fights in a cage. Remember, these guys have NOTHING on their knuckles. Nothing. Here you go: 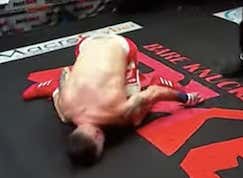 I was going to post another compilation but to be honest they're too fucked up. You can look them up on your own if you want. Can't wait for regular sports to be back.