No, It's not Florida Man Friday, sadly. But, every day feels like the same day so we might as well act like it's always Friday, right?  Right.

On today's episode of Hard Factor News, we took a familiar trip to the sunshine state where locals seem to be unfazed by the current CDC recommendations.  A recent fad sweeping the nation is over the top gender reveals and Florida has taken the belt when it comes to too over the top.  Videos and stories about spectators/family members getting injured during these extravagant reveals are common, and some have even resulted in death.

This past weekend, one Florida family couldn't help but be a Florida family and held their gender reveal in a wooded area despite shelter-in-place orders.   Instead of the typical release of colored balloons from a box, or bursting a color-coded pinata, this family decided to introduce Tannerite to the viral trend, and exactly what you expect to happen, happened. 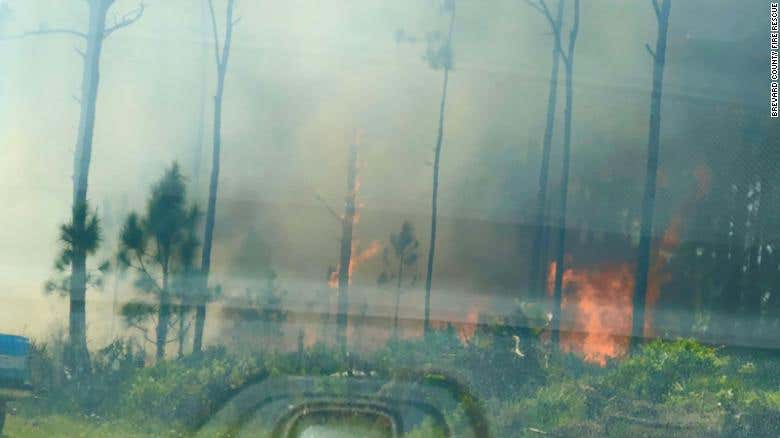 No, that's not Australia or California.  That's a 10-acre brush fire in Brevard County, Florida.

The family that moronically hosted this party must have just got done watching Tiger King, and decided to take a page out of the Joe Exotic playbook... Stupid.

Just one day, ONE DAY, after Brevard county issued a ban on open fires, like a bonfire or campfire, due to ongoing drought conditions, the expecting couple thought they'd scrap their burning baby-man idea for the reveal and replace it with an epic explosion.

"No honey, it ain't gonna catch fire.  It's just explosives! I seen't Joe Exotic do it on the TV!"

First responders originally thought the fire was started by fireworks, which is understandable.  It's Florida.  Fireworks are the only way to celebrate anything down there.  Birthday? Fireworks.  Thanksgiving? Fireworks.  Bond hearing went well? Fireworks.  Find out you're not the father? BIG time fireworks.  Once on the scene, it didn't take long until they discovered explosives were involved, probably after seeing one man holding a rifle and struggling to hear over the ringing in his ears from the blast.

The fire was quickly handled by fire rescue, no people or homes were harmed, and Chief Schollmeyer had this to say.

"Use common sense"? Clearly he doesn't know where he is.

The resulting fine for this sort of idiocracy is ONLY $500 and It's not clear whether anyone involved will be forced to pay it.  We can only hope that state legislators rethink that amount after seeing the damage done here, though.

Get the full story covered on today's episode of Hard Factor News (and below) and hear more like it Monday - Friday.

Subscribe to the POD- Your daily dose of News Cocaine.