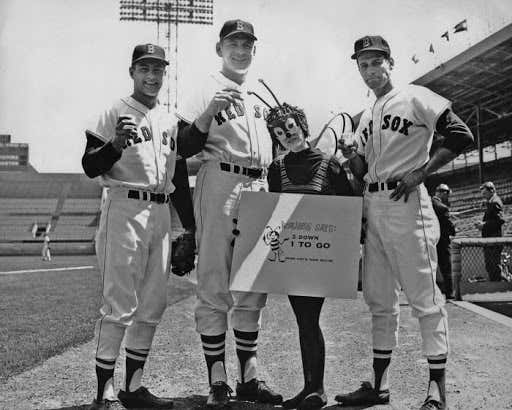 At six foot five, two-hundred and forty pounds and wearing size 14D shoes, Richard Raymond Radatz was a big man. He was born in Detroit on April 2nd, 1937 and became a two-sport star (baseball and basketball) at Michigan State before signing with the Boston Red Sox in 1960.

While still in the minors, Radatz developed a sore arm and was sent to the bullpen by his manager, Johnny Pesky. Radatz was not happy about his bullpen assignment, but it was there where he would become one of the most feared pitchers in baseball during the early 1960s.

Radatz delivered the baseball sidearm, effectively hiding the ball which he threw consistently at 95-96 miles per hour, and from a mound that was 15”-20” above home plate. It wasn't until 1969, Radatz’s final season, that MLB mandated pitching rubbers be no more than 10” above home plate, minimizing the pitcher’s long time advantage which began in 1904.

In 1963 Radatz entered a game against the rival Yankees in the top of the ninth in relief of starter Earl Wilson who had loaded the bases with nobody out. Radatz struck out Mickey Mantle, Roger Maris, and Elston Howard, each an American League MVP during their careers, throwing only ten pitches. When Howard struck out for the final out of the game, Radatz thrust his clenched fists overhead, and after being reminded of it the next day by broadcaster Curt Gowdy, it became his trademark gesture. It was after that game that Mantle referred to his nemesis as “that Monster”. And why not, Radatz faced Mantle 19 times during the Mick’s Hall of Fame career, striking him out 12 times in 16 official at-bats.

"The Monster" wasn’t all business. Former Red Sox starter and 20 game-winner, Bill Mombouquette, remembers him this way-- ''I never used to give the ball to the manager when he'd come to get me, I'd wait to give it to the guy coming into the game. I used to say to Dick, 'You'd better get these guys out or I'm going to kick your butt,' He'd say, 'Go in the clubhouse, crack me a Bud, and I'll be right up.' And he would.' "

Johnny Pesky's recollection of Radatz's three strikeouts of Yankee greats goes like this-- "Radatz comes in and says to Earl, `Big boy, crack a couple of cold ones and I'll be up there in 10 minutes.' He told me to get my little ass in the dugout, which is something he told me a lot of times. He strikes out the three of 'em, Mantle, Maris, and Howard, on 10 pitches."

In 1963 Radatz went 15-6 with a 1.97 ERA, saved 25 games, and became the first pitcher in MLB history to have consecutive 20-save seasons. In '64 Radatz pitched in 79 games, led the league with 29 saves, recording 16 wins with a 2.29 ERA. He struck out 181 batters, establishing a record for the most strikeouts by a relief pitcher in a single season, and won his second Fireman of the Year award.

Sportswriter Jim Murray wrote that "Dick Radatz brings one weapon - a fastball." Radatz's one-pitch arsenal concerned Ted Williams who encouraged Radatz to develop a second pitch, a sinker. Radatz took Williams' advice, but in doing so he altered his mechanics and his fastball suffered, and he never regained his dominating form.

Struggling at 9-11 with a 3.91 ERA in '65, injuries to his arm and shoulder forced season-ending surgery. He was traded to the Indians mid-season '66 and was with the Cubs the following year. Out of action in '68, he finished his career in '69 with the Tigers and Expos.

Dick Radatz’s career was cut short after seven seasons as a result of injuries and the intensity with which he played the game. After retiring from baseball Radatz made his home in Easton, Massachusetts and many local residents enjoyed the rare privilege of bumping into him around town. It was in 2002 while in the CVS Pharmacy in Easton that I looked over and saw 'The Monster' heading for the cash register, several boxes of Hershey chocolate bars tucked under his massive arms. “Hey, Dick Radatz-- I saw you hit a home run!” Radatz never broke stride, cracked a confident smile and said “June 5th, 1965 against the Kansas City Athletics!”

Radatz had one career home run and I had seen it on TV. It gave the Sox a 4-3 lead in a game they won 5-3. The day after hitting the home run, Radatz was quoted in newspapers as offering to give batting instruction to his teammates, many of whom were struggling with the exception of Tony Conigliaro (league-leading 32 HR) and Carl Yastrzemski (league-leading 45 doubles). The team finished 62-100, 40 games behind the first-place Twins, in 9th place out of 10.

Dick Radatz, AKA: “The Monster” (pronounced Monstah), died on March 16, 2005, after falling down the stairs in his home and suffering a fatal head injury. He was a unique individual, who, in his brief major league career, definitely left his mark on the game of baseball.