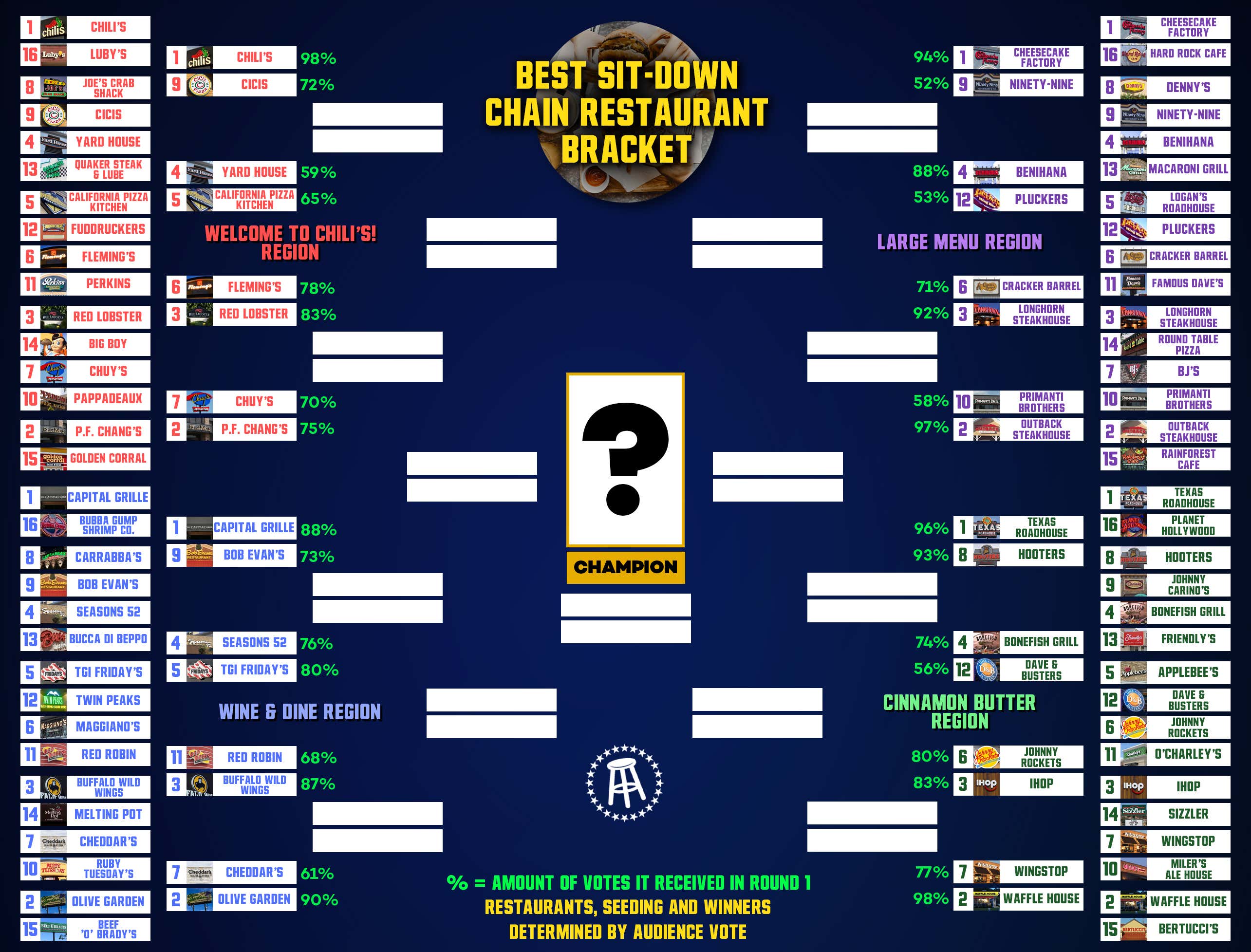 This is March April. Cue the music...

So, believe it or not, people love filling brackets out while quarantined! They love it so much that they essentially tarnished the Google account I used for the Round 1 vote. We had a few hundred thousand votes. That's what happens when the voting form gets linked to the Barstool Instagram account. Luckily, I was finally apple to load up the final results and move us into the second round. A few reminders... 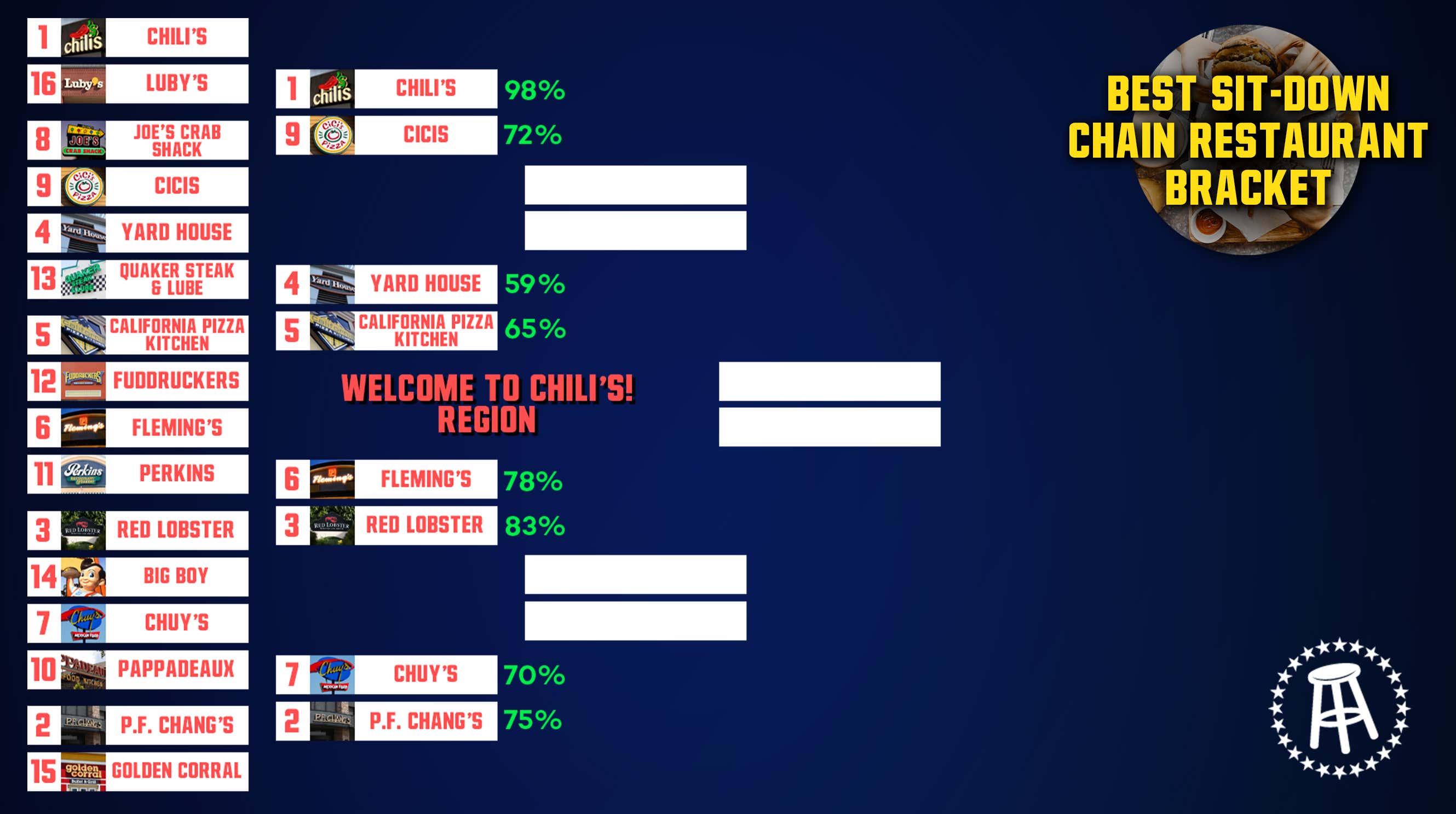 This region played out just about as expected in round one, even the slight 9-seed upset of Cicis over 8-seed Joe's Crab Shack. When it comes down to it, the seafood chains are going to struggle I think. It's clear 1-seed Chili's is the juggernaut favorite in this region and I really can't see anything crazy happening in the second. I think 5-seed California Pizza Kitchen (CPK) is a little more widely known than 4-seed Yard House but other than that this will play out with more chalk. 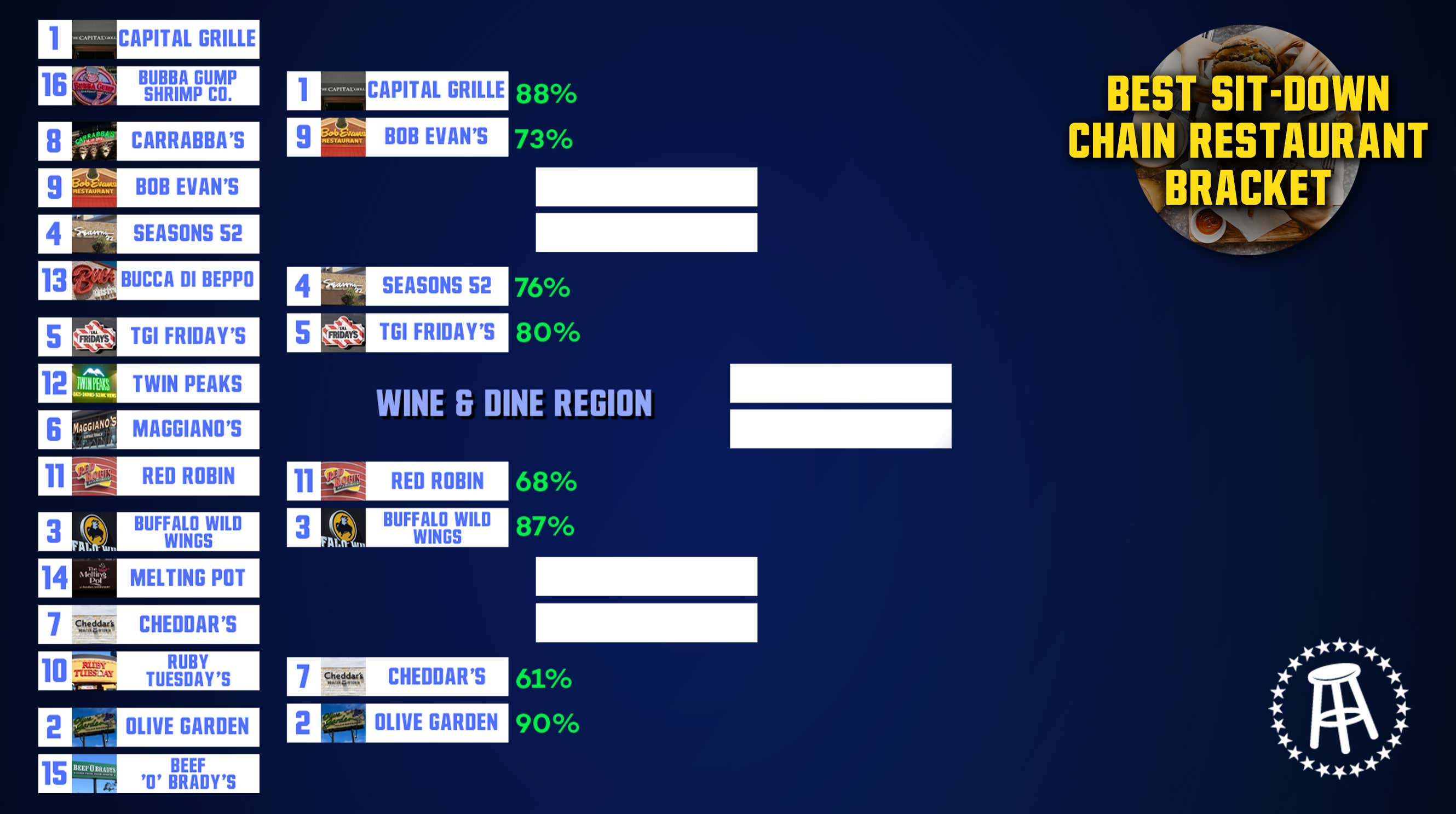 Personally, I was pleased to see 7-seed Cheddar's move on because they are my Final Four pick for the region. I can't see their run extending much past 2-seed Olive Garden however which dominated in the first round. Our big upset of this region was the unlimited sides kings 11-seed Red Robin with a pretty convincing win over 6-seed Maggiano's. While I'd like to think they can pull another upset, I think round two of this region is going to play out with some heavy chalk, with possibly the exception of the popular 5-seed TGI Friday's. This is still the breadstick giant's region to lose. 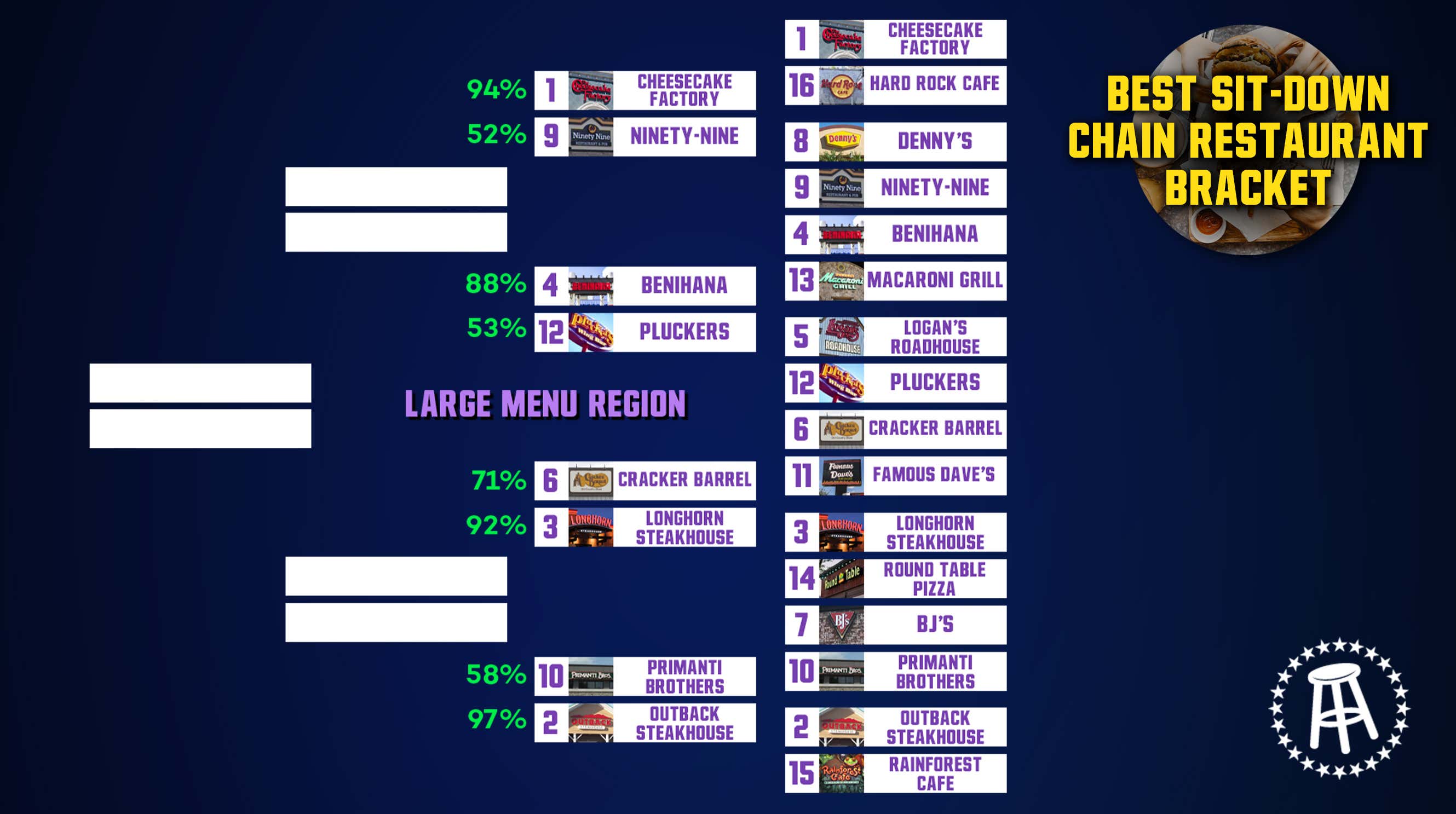 This Austin native was pumped to see 12-seed Pluckers move on to the next round. A good social media push definitely took the Southwest wing chain over the top on Logan's Roadhouse. Going up against 4-seed Benihana is no joke though and this is a totally separate thought, but I made a mock recipe of their fried rice recently and holy shit was it delicious. While it had a really close battle in the first round I actually think 6-Cracker Barrel finds a groove and takes down 3-seed Longhorn Steakhouse. In the end, though, we are all waiting for the inevitable Elite 8 matchup of titans between 1-seed Cheesecake Factory and 2-seed Outback Steakhouse. 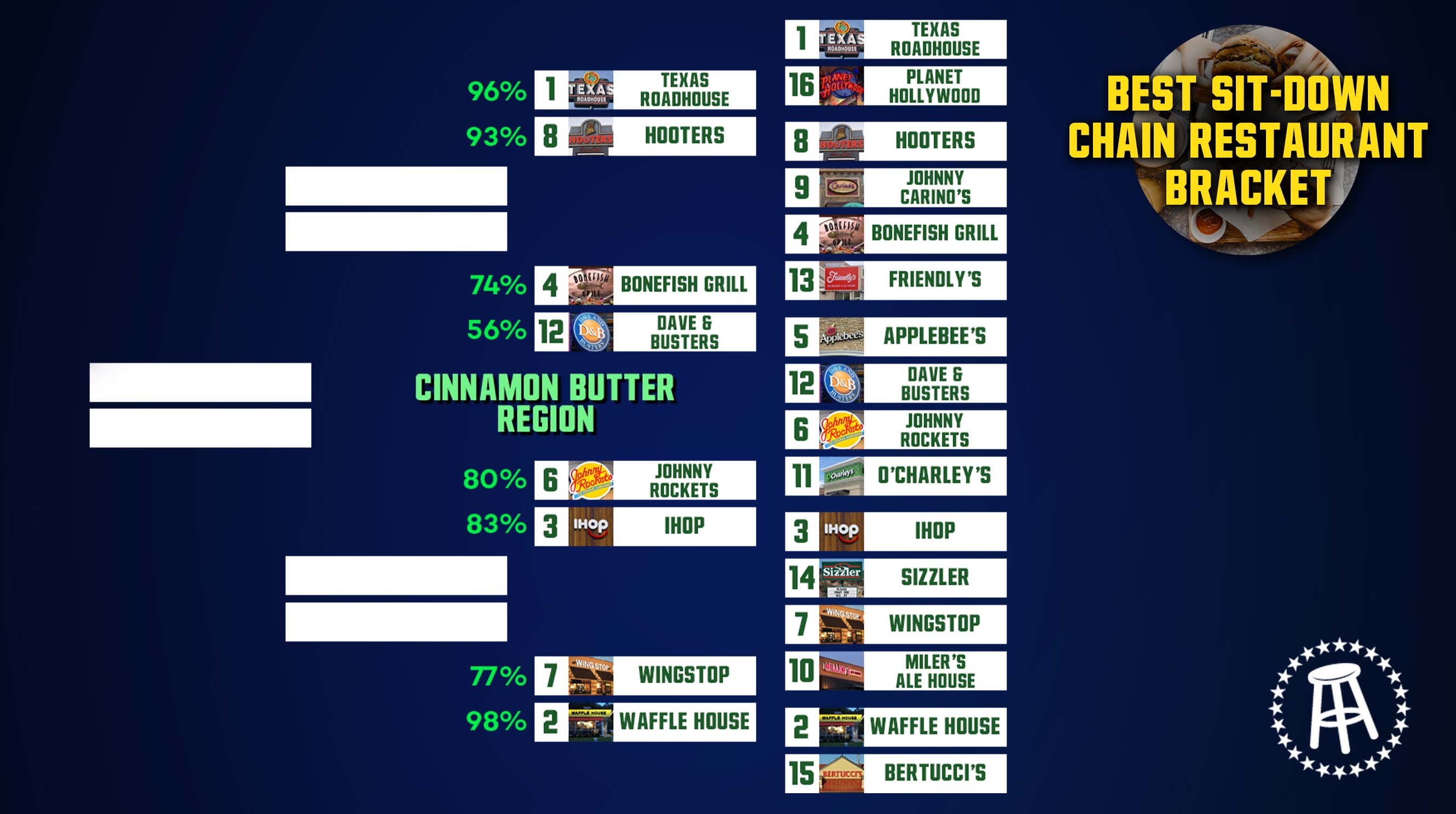 Down goes an absolute fucking giant, my goodness. I'm still shocked 12-seed Dave and Busters took down 5-seed Applebee's, especially factoring in the staple chain's great half-priced appetizer deal (it's all people talked about when they tweeted me about Applebee's). Can the "eat and play" restaurant upset 4-seed Bonefish grill in the second round? I doubt it, but what a fun Cinderella story we have on our hands. The favorite in this region for me remains 2-seed Waffle House, which has the strongest regional backing and sentiment out of any restaurant in this competition.

My Pick: 4-seed Bonefish Grill
My Prediction: 2-seed Waffle House
Round One Upset Pick: None

--
Voting will stay open for a day or two and you can also click this link (VOTE HERE) to give your input.