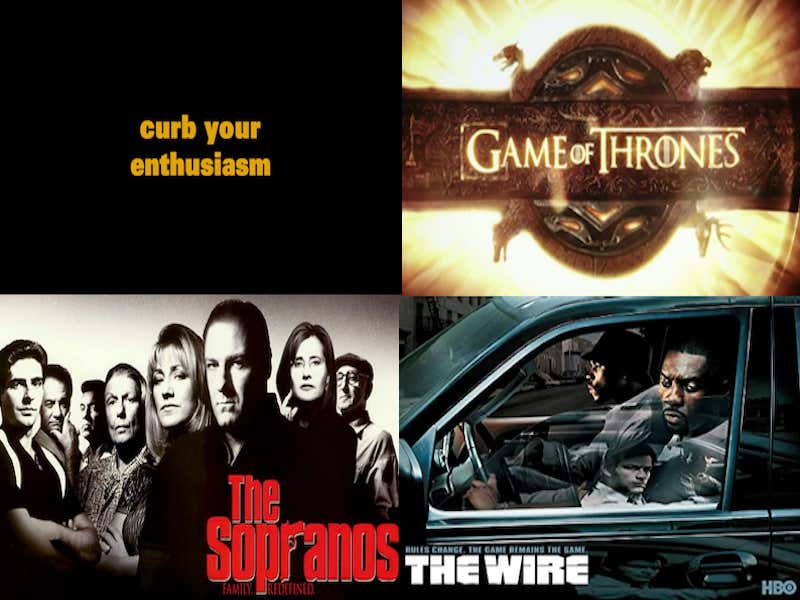 Pick which show you would eliminate

So HBO announced that they are offering free access to everyone that is staying inside instead of spreading a global pandemic.

Which obviously got my elimination brain flowing since there's nothing else to think about other than the aforementioned pandemic.

Now here are my 2 cents about four shows I absolutely love(d). First of all, it's craaaaaazy to think after the first 6 seasons of Thrones where it looked like it could become the clear GOAT show, there is a decent chance it will end up with the most elimination votes. But when those motherfuckers Benioff & Weiss burned up all the goodwill the show gave us by slowly building a world out of GRRM's crazy mind by smashing the fast forward button for the last two seasons and cause millions of people to sign an internet petition for a redo, Thrones lost the untouchable label for an eliminator. However, those first six seasons can go toe-to-toe with any other show EVER, even with a final season that was outright basura (that Game of Stools was the first podcast to see coming for the record). The more I think about it, the more I realize Benioff & Weiss completely botching the final season of Thrones was the Falcons blowing a 28-3 lead in the Super Bowl.

The Sopranos was my favorite TV show ever before I watched The Wire, which is currently my favorite TV show ever. But even I can admit they both had uneven moments as things winded down like Thrones. I still hate Tony's coma scenes more than Paulie hated Christopher and think the fairest criticisms of The Wire are nitpicking the newspaper plot over Season 2, which has aged like a fine wine in my opinion since the dock scenes are much better once you can get your brain around how different everything is from Season 1 and the arrival of Brother Mouzone remains awesome. Curb is obviously a comedic beast that also has a formula we have become very used to by now. It's not a matter of if everything is going to blow up in Larry's face in spectacular fashion, but when. I feel like Curb's highs aren't as high because of this but its lows don't get as low.

Okay, I felt really dirty criticizing four of my favorite shows ever. All of them are awesome in their own right but vote which of the four you would give the heave hoe to now.