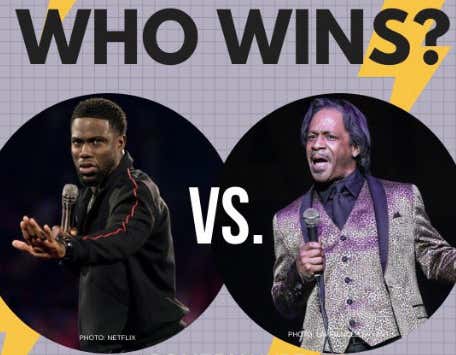 I'm going to keep this short because I don't think it needs much explaining. There are two types of comedians in this world - those who work hard at being funny, and those who are funny. Katt Williams is funny. Much funnier than Kevin Hart. That's not throwing shade, that's a fact. They have two different kinds of humor, but when it comes to stand up, Katt Williams takes the cake. He never went commercial, he never apologized, he never even did a commercial. All he did was make people laugh and get beat up by 7th graders. That's it. His bits weren't about drinking with D-Wade, they were about smoking weed with your buddies. Even the stuff that wasn't relatable was because you could tell he actually believed what he was saying. Kevin Hart may be more commercially successful, but Katt Williams will always be considered a far superior stand up.

Here's what people were saying on twitter. I should mention that a lot of these tweets are referencing if the two of them were to have a comedy "battle." Which I guess is like a roast battle? Regardless, here ya go:

Did I only pick tweets that proved my point? Absolutely. But ask any funny person who's funnier and they'll say Katt Williams. End of discussion.