Alright, alright, alright, we have some good racing today, baby. Finally we get Oaklawn and Gulfstream back on the card today and that means better horses, better riders, better trainers and better racing to bet on. I have targeted the early Pick Four at Gulfstream and Paulie is working on Oaklawn which starts a little later in the day. I'm using a Pick Four instead of the Pick Five because that first race at Gulfstream seems truly wide open and I think I'd have to go five or six deep, so let's just cut it to a Pick Four. Here we go.

Race Two: It's a maiden claimer, but the (6) Bibiana is taking a big drop in class and has the added benefit of having the best jockey/trainer combo in this race with Saffie Joseph and Tyler Gaffalione. Tough to beat, I'm going to use as a single.

Race Three: With the scratches (1) TalkTheTalk is going to be a deserving heavy favorite. She's going turf to dirt but has the benefit of Jane Cibelli, who is excellent at that particular shift. Factor that with the drop in class and the shortened distance and she should have this under control. Another single.

Race Four: The benefit of having two early singles in a Pick Four is that you can go very deep in the other legs and still have an affordable tickets. This race is very tough in my view. You have a murderer's row of trainers and riders in this race. I'm going ALL and hoping for a price.

Race Five: This is a race that isn't quite so wide open as the fourth, but you still could catch a price here if you're a little lucky. My top choice is the (6) Worth Avenue. This is his first off the claim for trainer Victor Barboza who is 57% off the claim. FIFTY SEVEN PERCENT! I'm also using 2,3,4,9. 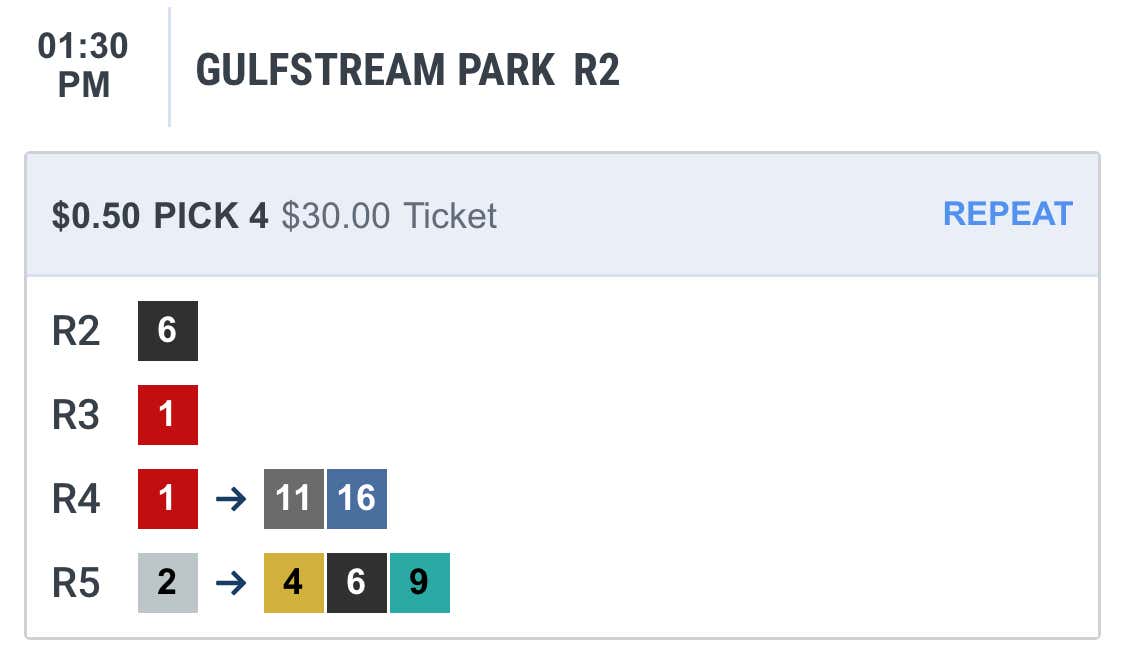