rin collaboration with the Sportsecyclopedia.com 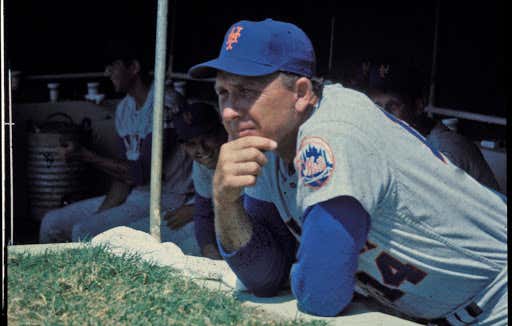 With baseball on hold due to a players’ strike, New York Mets manager Gil Hodges spends Easter Sunday playing golf with his coaches in West Palm Beach. On his way back to his hotel, Hodges collapsed and died from a heart attack at the age of 47. Gil Hodges had previously survived a heart attack in 1968. Yogi Berra would replace Hodges as Mets’ manager, as #14 was retired in Gil’s honor.

Gilbert Ray Hodges was born on April 4, 1924, in Princeton, Indiana. The son of a coal miner, Hodges, was a four-sport star in High School. He turned down a chance to sign with the Detroit Tigers in 1941, choosing to attend St. Joseph’s College with an eye to coaching. In 1943, Gil Hodges signed with the Brooklyn Dodgers and appeared in one game before joining the Marines for World War II.

Earning a Bronze Star as an anti-aircraft gunner in the Pacific, Gil Hodges returned to the Dodgers and spent 1946 in the minors. Hodges was a late-season call up in 1947 and made the majors to stay in 1948, becoming the everyday first baseman for the Dodgers. In 1949 Hodges had a breakout season for Brooklyn, making the first of seven straight appearances in the All-Star Game.

Gil Hodges became a fan favorite in the 1950s, living in Brooklyn he became a part of the fabric of what made the Dodgers, ‘’The Boys of Summer.’’ Hodges was terrific in the clutch, with 1,274 career RBI, as he at one time held the National League record with career Grand Slams, with 14. Hodges was a lifetime .273 hitter with 370 career home runs. In addition, Gil Hodges won three gold gloves.

After the Dodgers moved to Los Angeles, Gil Hodges remained in Brooklyn in the offseason. When the New York Mets joined the National League as an expansion team, Hodges was on the team as a reminder of great New York heroes of the past as he hit the first home run in the history of the Mets. Hodges retired as a player in 1963 to take the managerial job with the Washington Senators.

Though the Washington Senators never had a winning season in Washington, the Senators improved each season until 1967, when he departed to return to the New York Mets as their manager in 1968. The Mets finished ninth in 1968, posting a record of 73-89. One year later, they stunned the world, winning 100 games and winning the World Series. The Mets finished in third place in 1970 and 1971 and hoped to return to the top of the National League East, as they had just acquired Rusty Staub on April 1st.

As April began in 1972, the players went on strike. It was the first time that a work stoppage put the games on hold as the start of the season was delayed for a week and a half, before an agreement was reached on April 13th. It was in this hiatus that Gil Hodges and several Mets coaches left their spring home in St. Petersburgh for a golfing weekend in West Palm Beach.

Following a morning round of golf on Easter Sunday with Joe Pignatano, Rube Walker, and Eddie Yost, Gil Hodges collapsed outside of the Ramada Hotel, hitting his head on the sidewalk. Pignatano went to aid the falling manager but felt Hodges die in his arms. Gil Hodges, a lifetime chain smoker, was just two days away from his 48th birthday. Many of his former Brooklyn Dodgers teammates attended Gil Hodges’ funeral as he was laid to rest at Holy Cross Cemetery in East Flatbush, not far from the old location of Ebbets Field.

The New York Mets would wear a black armband for the 1972 season, as Yogi Berra took over as manager.