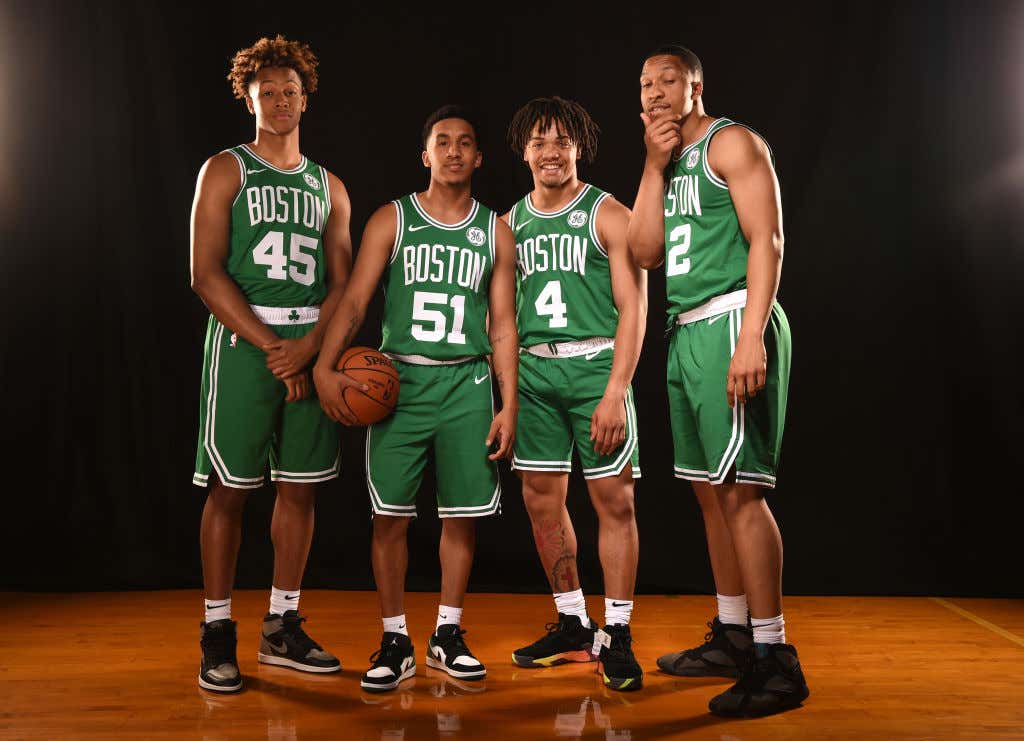 Heading into last year's draft knowing that Danny Ainge had no fewer than one billion picks, I think we were all under the same impression that there would be no way he would keep them all. We were all pretty much expecting some sort of trade, whether it was packaging picks in order to move up or maybe move a player and some picks for a veteran player, something. Well, that didn't happen exactly like we thought. He did make a trade, but it wasn't exactly what we were all anticipating. In the end, the Celts added four players to their roster with three of them locking in guaranteed deals. It was a mix of lottery talent, la ate round rotation player, and some second round fliers to help sure up their depth. All in my opinion had different expectations heading into the year and if the games never do come back, how would you rate this rookie class? They've certainly had their moments both good and bad like pretty much any rookie, but would you say they've lived up to what you were expecting?

I think it's important to look at each rookie individually since they all have different roles and expectations. Let's start with the one guy who we all said on draft night had a chance to play right away and ended up doing just that.

Heading into the year the general consensus was one of the main reasons Grant was going to find his way onto the floor was because of his defense. As we know, if you are a rookie and you want to play you have to convince Brad you can defend on a consistent basis. That's pretty much exactly what Grant has done

Of all regular rotation players (not just rookies) Grant has the best Drtg on the team at 102.4. Turns out being strong as fuck is actually pretty useful as a defender. Grant hold's opponents to 40% shooting and has the lowest defensive percentage point difference of any rotation player at -5.2.

Grant is a player that has accepted his role as a glue guy, he keeps the ball moving, can defend multiple positions, and anything he gives you from three is a bonus. In my opinion Grant has surpassed whatever expectations I had heading into the year and I don't think it's particularly close.

We knew right away that Romeo wasn't going to play much this year. To me he was mostly found money given the SFs that are currently on this roster, but his ceiling is still super high. He's basically had a rookie season that was similar to Jaylen's in that he might not play much, people will be quick to call him a bust, but it's more a matter of opportunity than actual skill. Offensively he's struggled more often than not, but that was always going to be where his game had room for improvement. One thing we can't deny is he's found a way to come and and defend at a pretty respectable level

It's a small sample sure, but Romeo has a Drtg of 102.1 in his 11 minutes per night. He protects the rim far better than I anticipated, and what I love about Romeo is his demeanor never changes. He's obviously the one guy you would think could be on the move in any potential deal this summer, but I am intrigued about him turning into a legit second unit two way player over the next few years. He has great size, has shown flashes here and there offensively, it's just a matter of finding time to actually play him. I think moving forward if we see a roster that maybe doesn't have guys like Wanamaker/Green/etc on it, we'll see Romeo play more.

What doesn't help is how other lottery picks play on shitty teams and are throwing up huge numbers, which gives the impression Romeo stinks. That's why I feel like this is a Jaylen 2.0 situation. Coming into this team as a lottery pick is not the same as other situations. It's hard to know just what Romeo is and could be until he gets more time.

Tremont is exciting, there's no denying that. Guy has hands that are quick as shit and he might be the best true point guard of any reserve player. The way he sees the floor and can defend at a respectable level despite his size is certainly nice

You see a lot of Celtics fans demand he get minutes over someone like Wanamaker, but I think it's important to be realistic when it comes to Waters. Offensively he's been pretty brutal, shooting just 34/17% in his 10 appearances. He's tearing up the G-League sure, but we haven't really seen that translate at this level. He's maybe the one rookie of the group that I feel like we have to give an incomplete to simply because he's barely been with the NBA club. The team clearly believes in him and I think next season will be a little bit better of a test if he somehow finds his way to the active roster, but as of now we just don't know

On the surface, Carsen has been a bit of a disappointment based on what we all expected coming into the year. I imagine Ainge's intention was for Carsen to be that super sub and offensive spark plug off the bench and that simply hasn't happened. His shot has struggled coming in at 32/30% but when he finds his stroke it's pretty damn automatic

Of the two, I just think Carsen's ceiling is higher than Waters. I like his build much more in terms of being able to defend (109 rating), and he's the better shooter of the two at this point in time. Here's the thing though, I'm pretty sure he's in Brad's doghouse. Maybe it's for inconsistent play, maybe it's locker room stuff, but for whatever reason Brad never plays him even when it's clear as day they need to do something about the back up point guard spot. I'll admit, that's a little concerning.

For me, I think Carsen's issues are mostly a confidence thing. I feel like if he comes in and misses his first shot everything goes into the tank. That sort of happened with a young Tatum too. When 60% of your shots are threes, it's hard to be a three point specialist while shooting 30%. He doesn't exactly get to the line, and I think he has some problems staying focused when calls don't go his way. Again, like a young Tatum. The good news is the more Tatum played he got over those issues for the most part, and if Edwards finds himself on this team next year (isn't traded), there's no reason why he shouldn't compete for Wanamaker's minutes who is in the last year of his deal.

I mean, he rules. Enough said.

Our summer league darling has had an up and down season while playing a position that is already loaded at his position. One thing is certain though, the man is a freak athlete who does crazy shit on the regular

Who knows what his future is on this roster, but he's the type of wildcard I don't hate having at the end of the bench. Super athletic, makes the hustle plays, and dunks hard as shit. Hard to not love any Javonte minutes.

When you're picking as late as Ainge was outside of Romeo, I feel like if any of those picks turn into a rotation guy then that's a win. It's pretty much a crap shoot at that stage of the Draft. They have that with Grant. The jury is still out on pretty much everyone else from this class, and I have no idea what the plan is for this upcoming draft when the Celtics again will have a billion picks and zero spots available. Logic says they'll package them for something, but that's what we thought last year and got the exact opposite so who knows.

So now I'll ask you. How would you evaluate this rookie class. Better than you expected?