So because we're cooped up in our homes trying to avoid catching this douche bag virus, 11 of us started a league on MLB "The Show". Here are the current standings after a week or so of play: 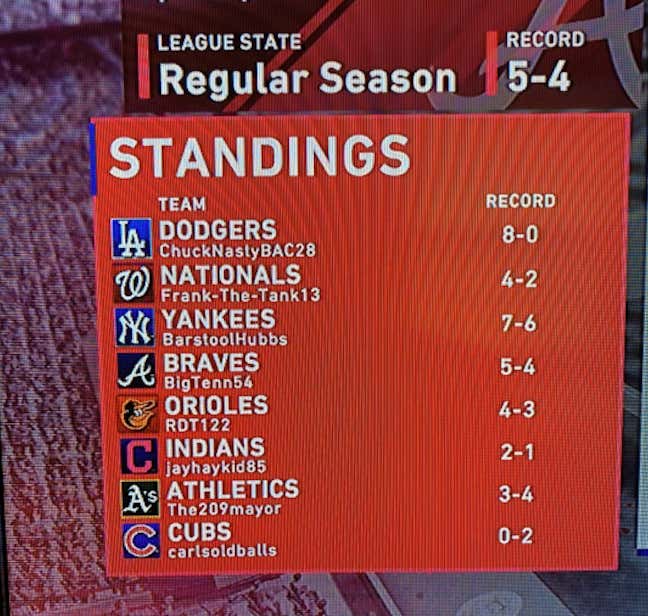 Not good. I somehow beat Smitty and then beat Reags in a nail biter. I played Hubbs last night and I was painfully close to spiking my controller out of frustration. Ya know why?

Because I STINK at video games. Prior to buying PS4 a few weeks back, the last console I owned was the original Xbox. In college I'd fuck around with Call of Duty here and there and did actually get pretty addicted to Guitar Hero, but since college I cannot tell you one instance where I played one second of video games.  That's a 10 year span.

The games are so goddamn realistic now. I mean The Show is like a freaking Sunday Night Baseball broadcast with all of the bells and whistles and blah blah blah. Playing it is one of those "ya wanna feel old?" moments for me. Call me old fashioned but bring me back to the days where I can go and merk Ganondorf on Ocarina of Time or hit 800 foot dingers with The Big Hurt in Ken Griffey Jr. 64.

But whatever. Adapt or die as they say. But even though I stink at video games, that doesn't mean I won't put money I don't really have where my mouth is. So I'm taking on resident block head Smitty for a cool 50 biscuits today in The Show and going live now. Here's the link:

Am I going to win? No. But I NEED the satisfaction of wagering on something I shouldn't be, such as 50 whole biscuits. I miss that angry feeling so goddamn much. So