Blogger's Note: Obviously the Rona has postponed Opening Day and the rest of the baseball season indefinitely. But SNY ran a simulated game of MLB: The Show 20 today that KFC and I watched on a live stream while talking baseball, day game dogs, and a bunch of Mets stuff on the We Gotta Believe Twitter handle. You can watch the game with our commentary above, but I am going to blog as if today's 3-2 loss happened in real life 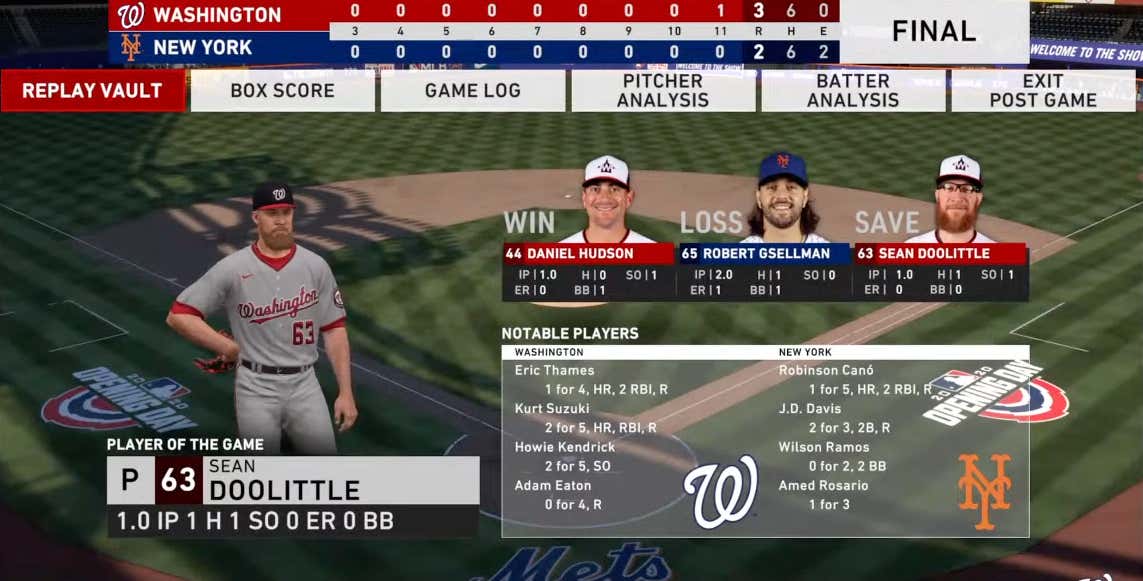 CUNCEL DA SAESON! It may only be one game but I can already tell what type of a year it is going to be based on Noah's UCL exploding and losing on Opening Day in 11 innings. What a fucking joke.

There are only two things we can feel comfortable about as Mets fans:

1. Despite being the punchline of baseball, the Mets will almost always on on Opening Day and give us false hope

Well, you can cross number one off the list because Luis Rojas can clearly NOT manage a game. Why the fuck would you go with Robert Gsellman for more than an inning when you have Seth Lugo ready to drop his Quarter Rican dick on the Nats? I won't criticize Rojas for ignoring Familia or Diaz in the bullpen because my heart is not in midseason form to handle those rollercoaster rides. But there is no way Cheatin' Charlie Beltran would've mismanaged the bullpen like that or allowed Jake Marisnick to K with 2 outs and the bases loaded of a tie game in the bottom of the 9th without turning a trash can into a snare drum.

However, that was probably the perfect way Marisnick introduce him to Mets fans. Welcome to Flushing, White Boy Juan Lagares! You are now Johnny Large, Jake. I wish I could get angrier at John Large for being John Large but he's not the one who ignored center field as a position of need for the second year in a row despite it being one of the most important positions on the entire fucking field. Thanks for that Brodie, you snake oil son of a bitch! Today was supposed to be Uncle Stevie Cohen's Opening Day Gala and instead it was just another typical heartbreaking Mets loss in extra innings against a division rival. Cuncel da saeson and cuncel my life.

Blogger's Note 2: Okay, that felt therapeutic even if it was just overreacting to a computer simulation of a children's game, which is only a slightly weirder than overreacting to a real life version of a children's game like I would usually be doing during baseball season. Say what you want about MLB: The Show. But the offense and bullpen giving Jacob deGrom a no decision in a game where he allowed only 2 runs is as realistic as it gets (other than Sean Doolittle not melting down against the Mets). Turns out I'm not ready for baseball back in my life, so here's to Rob Manfred and his collection of stooges to take their time returning us to normalcy