We can leave the official review of this guy's bars to someone a little more versed in the hip hop scene. For now I'd rather refer back to LT's advice because quarantined drug use can be a slippery slope. One second you're applying an aloe-based CBD cream to an inflamed shoulder, the next you're stuffing MDMA suppositories up your ass by the handful. I've seen it a hundred times.

Personally I like to play it delicious with a responsible amount of great tasting less fillings. That's my numbah one and it has nothing to do with being a Miller Lite sponsored athlete. Under the orange bike helmet of objectivity, GTLF really is the best overall beer. Start checking boxes: drinkability, flavor, 96 calories, appearance, a full yet balanced body, history, tradition, excellence. It's a 1st ballot hall of famer on great tasting/less filling alone, but when you add up the rest of its respective scores, you can't deny the recognition. It's Chicago's #1 beer in both the Overall Category and Quarantine Subcategory for a reason. And yes I'll be in the comment section defending this take if you want to catch some hands.

Elsewhere, I hope this guy survives Corona. As far as neighbors go, you imagine this dude would be the best to crash a house party in the summer. Say mom and dad are out of town to Vegas for a couple nights. You and the boys rally the OG crew and throw a palooza-level party. 2-kegs. $5 a cup. Kyle's girlfriend is freezing the jello shots. It's your textbook A+ house party when Old Joe shows up at 11pm. Your friends think he's there to turn the music down but they're wrong. Joe's here for the party and he just zeroed in on the keg. Pull me up you lazy motherfuckers. 43 seconds of keg standing later and a legend is born in your circle of friends.

The chats reign throughout the night, well into the morning. Old Joe stays long enough to wear the gas mask while you and the boys annihilate Sweet Child O Mine (expert) on Guitar Hero. Then off for pancakes at the Huck Finn's 24-hour diner, one of the last remaining strongholds in the neighborhood to allow cigs inside. It's 2005 in my hypothetical so bombs away. Pound those fucking cigs.

What you definitely don't realize is that Old Joe took it to the next level. That's Old Joe's style, and for that reason he needs to be protected at all costs. That's why I'm asking you guys - in addition to not smoking crack - to continue to stay inside. We need to save Joe and that's means Quarantine. (Pictured: How To Quarantine) 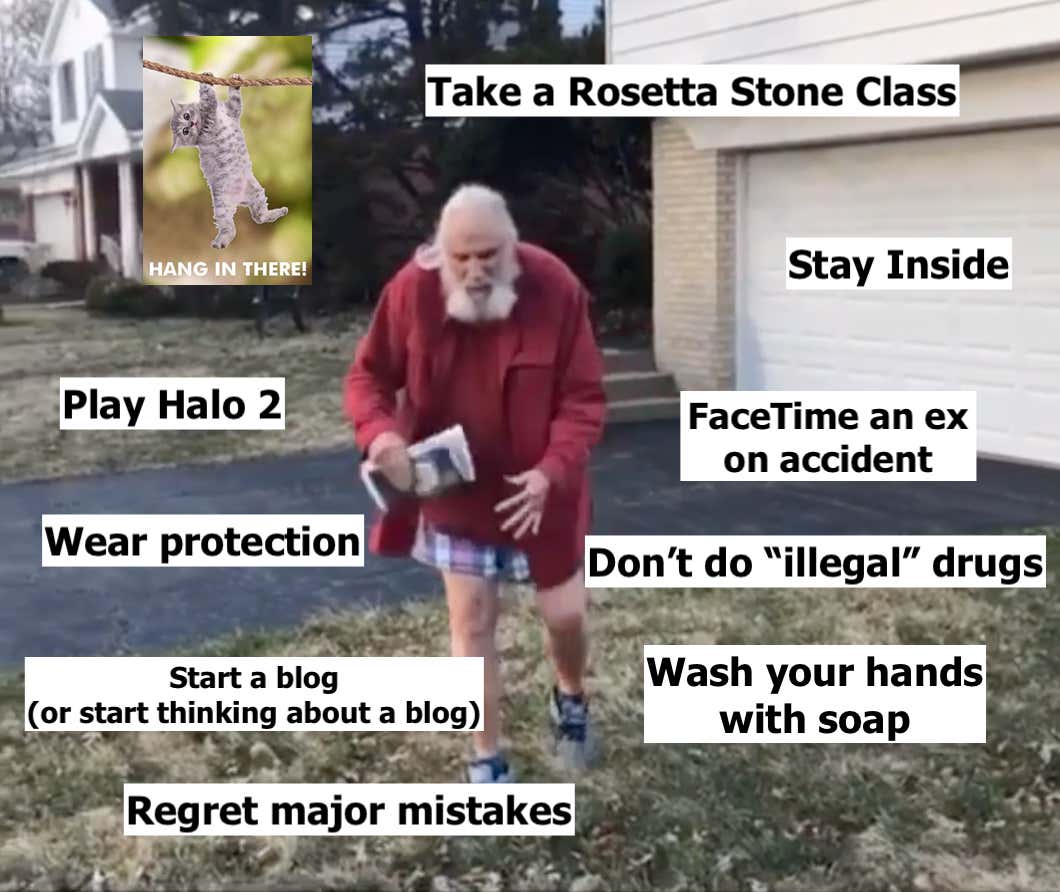