You remember Jeff Hornacek? How could you not? He was a guy who coached the Knicks, played forever, had one of the most memorable free throw routines (touching his face) ever. Oh, he also has a smokebomb (Kmarko's words, not mine) for a daughter, who is winning our hearts even more.

She went from a Kappa at USC to now being a host on Fox. But more importantly she's winning everyone's hearts. Why? Because who doesn't love a smoke that can drain jumpers. I don't care if it took 100 attempts, she's out here getting thousands of likes for hitting trick shots. You love basketball? I'm a fan of you. Plain and simple.

I know people remember Hornacek as a Jazz most likely, but the man was filthy in NBA Jam. I always played as the Knicks - because good luck beating Starks/Ewing - but HATED playing against Hornacek. But back to Abby.

That shot from behind the light pole followed by the shrug? Are you kidding me? 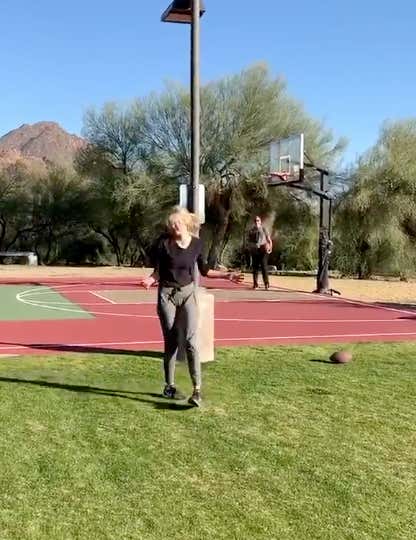 Abby, when this quarantine is all over with. You and me, co-ed 2v2 vs anyone.