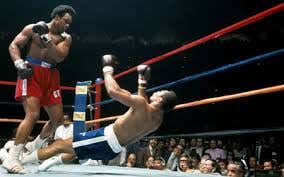 George Foreman dominates Ken Norton with a second-round knockout in a heavyweight title fight in Caracas, Venezuela. Foreman improved to 40-0 with the win to retain the heavyweight title. After an even first round, the champion took control of the fight with a devastating right that sent Norton reeling. After a midround knockdown, Foreman continued to attack flooring the challenger two minutes into the second round.

George Foreman was making his second title defense when he took on Ken Norton. Foreman was born on January 10, 1949, near Houston, Texas. A troubled youth, Foreman’s life began to turnaround when he joined the Job Corps at the age of 16. It was there he began training as a boxer in his spare time. After just three years, Foreman qualified for the Olympics and won the Gold Medal as a heavyweight in the 1968 Olympics in Mexico City.

After turning professional in 1969, George Foreman quickly climbed the heavyweight ladder collecting a series of knockouts. Winning his first 37 fights, Foreman got his first shot at the heavyweight title in 1973, stunning the boxing world with a second-round knockout of the previously unbeaten Joe Frazier. After a first-round knockout of Jose Roman in his first title defense, Foreman would put his title on the line against Ken Norton.

Ken Norton was born on August 9, 1943, in Jacksonville, Illinois. A multisport athlete growing up, Norton began his boxing career while serving in the Marines. After a 24-2 Golden Gloves record, Ken Norton turned professional in 1967 after leaving the service. He won his first 16 fights before suffering a loss to Jose Luis Garcia in 1970. He got back on track quickly after the knockout and won his next 13 bouts before taking on Muhammad Ali. In a highly publicized fight in Los Angeles, Foreman beat Ali, breaking his jaw in a 12-round split decision. Ali would beat Norton in a rematch six months later but retained his shot at the title against Foreman.

While George Foreman defended his title against Ken Norton, Muhammad Ali sat at ringside, working on commenting during the fight in Venezuela. It was already set that Muhammad Ali would fight the winner in the next heavyweight championship match. That event would take place on October 30, 1974, in Zaire. Ali would beat Foreman that day in the Rumble in the Jungle, winning the heavyweight title for the second time in his career.