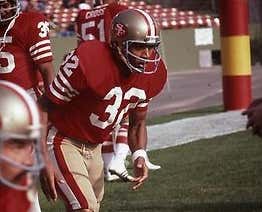 Orenthal James Simpson was born on July 9, 1947, in San Francisco. Growing up in the projects, Simpson was often in trouble as a youth. Following a third arrest, O.J. Simpson was counseled by Willie Mays to turn his energy to sports. This led to him becoming an all-city star at running back at Gallileo High School. After playing at City College in San Francisco, O.J. Simpson earned a scholarship to Southern California. At USC, the Juice became one of the biggest stars in college football, rushing for 1,540 yards while finishing second in Heisman voting in 1967. One year later, he won the Heisman by the most significant margin ever, as ran for 1,880 yards with 23 touchdowns.

The Buffalo Bills selected O.J. Simpson with the first overall pick in the NFL Draft. Simpson had struggles in the early part of his career but began turning things around in 1971 as he rushed for 742 yards. In 1972, O.J. Simpson won his first rushing title with 1,251 yards. In 1973, Simpson had one of the greatest seasons in NFL history, becoming the first player to rush for 2,000 yards as he won the NFL MVP. Simpson ran for 1,125 yards in 1974 and fell short of the rushing title. He would win the next two rushing titles, with 1,817 yards in 1975 and 1,503 yards in 1976. At the time, O.J. Simpson was one of the biggest stars in the NFL, parlaying his success into commercials and an acting career.

After four rushing titles in five years, O.J. Simpson struggled with injuries in 1977, playing seven games and finishing the season with 557 yards in 1977. At 30-years-old it appeared that the best years were behind Simpson, leading the Bills to decide to trade him. They would allow Simpson the chance to play in his hometown, sending him to the San Francisco 49ers.

O.J. Simpson continued to be plagued by injuries in San Francisco as he played just 23 games over his final two seasons, rushing for 1,053 yards. The Niners would post 2-14 records in each of his seasons with San Francisco, with 593 yards in 1978 and 460 yards in 1979. The Bills with the first overall pick chose Tom Cousineau, a Linebacker in 1979. However, were unable to sign him as he took a contract with Montreal Alouettes of the CFL. The Niners' disastrous trade would not hurt, as they were able to pick Notre Dame quarterback Joe Montana in the third round of the 1979 draft.