CHICAGO – A 21-year-old Wilmette man was arrested Sunday after police said he coughed in the faces of CPD officers while claiming he had COVID-19.

Just before 8 a.m., police were dispatched to the 7400 block of North Wolcott Avenue on the report of a disturbance at a traffic accident.

Police said Anthony Ponzi, 21, was slurring his speech, yelling and was foaming at the mouth at the scene. As officers attempted to speak with Ponzi, police said he coughed and spit in the officers’ faces while claiming he had COVID-19.

Ponzi was charged with two counts of aggravated battery against a police officer, two counts of resisting arrest, battery, driving under the influence of alcohol and drugs and driving with an expired license.

I think the knee jerk reaction is Yes that obviously looks exactly like the type of guy/kid that would pull this kind of move. But even more than that, we joked earlier today in the office that this is the kind of guy that blacks out at a White Sox game before walking thru the metal detectors. That's not just the face of a corona spitter, that's the collective face of every Miami (OH) dropout in the last 10 years super imposed on top of each other. Like take the mugshot of every pantagonia wearing, comb-over enthusiast that got wrapped up in Sigma Chi pledgeship just layered on top into one perfectly condensed picture. 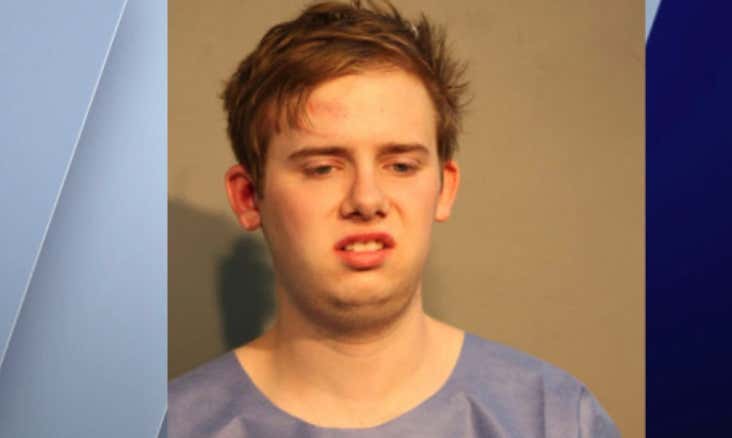 That's exactly what you'd get, plus/minus the presumed dump in his pants.

I'm am SO fucked - that guy

The real question though is whether you benefit from pulling this stunt on a couple Chicago police officers vs. the suburban force of his hometown in Wilmette. Naturally I think you're worse doing it to Chicago cops because historically you'd just get your face caved in the back of your skull instead of getting arrested. And you'd further reason the Wilmette police department is comparatively nicer on the basis of them being from the proverbial cupcake that is Wilmette. But then I go back to my high school days and remember that suburban cops went way harder. They were far more willing to chase you into a backyard to break up a party. Much more inclined to wreak havoc on America's youth than their big city counterparts, largely because Chicago police officers have bigger fish to fry than wrangling a heavily intoxicated bag of milk. So end of the day and in some kind of fucked up world, there's a silver lining in that he didn't give Wilmette their biggest case of the month.

Now let's hope Kim Foxx does the right thing and makes an example of him. Lucky for us to have proven leader in criminal justice leading the way.