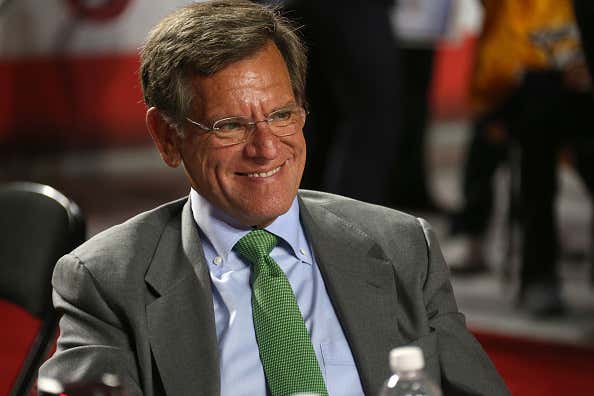 “Well, if I wasn’t confident, they wouldn’t be employed. Yeah, I’m very confident. Like I said, we had a good run, but that doesn’t mean when you’re drafting 27th, 28th, 29th, 30th … You know it’s a young person’s game. You have to put work in there. Stan, right or wrong, after ’10, ’13 and ’15, you essentially had to trade half your team away. Yeah could we have been a dynasty if it was back in the Edmonton days? Of course. The 2010 team could have been around for a long time. But with the salary cap, you couldn’t do that. It is what it is. You got to work within the system.”--Rocky

“...there’s not going to be any changes, so let’s put that away.”--Rocky Wirtz

This is the second or third time I've blogged this story. I don't care. I can't get it out of my brain and I am officially annoyed. Not even with the stance. It's that could've had his cake and eaten it too and didn't. You know what would've been the right thing to say about Bowman and McDonough when asked...?

Just don't say ANYTHING. The season is over/suspended/canceled/corona'd whatever. You don't need to answer those questions right now. It's like..."the fans aren't even thinking about us right now so let's go out of our way to piss them off". Well mission accomplished. Now I am mad and so is almost everyone else. 95% are mad according to some polls

Someone told me once that you can never really truly get in trouble for telling the truth. I believe that. He is all Rocky had to say when asked about the job security for the two most powerful decision-makers in the organization:

"We are really disappointed in how this season and the previous two finished. We know the fans are too. Right now, with the uncertainty surrounding the NHL's immediate future, we don't think it's prudent to even entertain a significant management change. We don't know when the season will start, when the draft will be, what the salary cap will look like, when free agency will start. Trying to fill vacancies for a new President, GM, and coach in that condensed timeline would put the organization at a disadvantage"--Rocky

Now, a natural follow up question(although I don't think the media does a good job with follow-up questions) would be "Had the season concluded normally would you have made a change?". And the answer to that would be

"We typically do year-end internal evaluations and we look for ways to make our organization stronger. We haven't had those year-end evaluations so I really haven't thought about making a change. I know the best option we have right now is to trust the management team that delivered three Stanley Cups."--Rocky

That's all. That's an answer that is honest. It isn't sticking your head in the sand. It's plausible for even the angriest and most disappointed fans(me). They didn't go that route. Wirtz decided to say "everything is fine and Stan and John are great" which there is no recent evidence that suggests they are.

I have faith that the Wirtz family will eventually make the right decision here. Maybe it's like what Churchill used to say about America though. "Americans will always do the right thing once they've exhausted all other options".