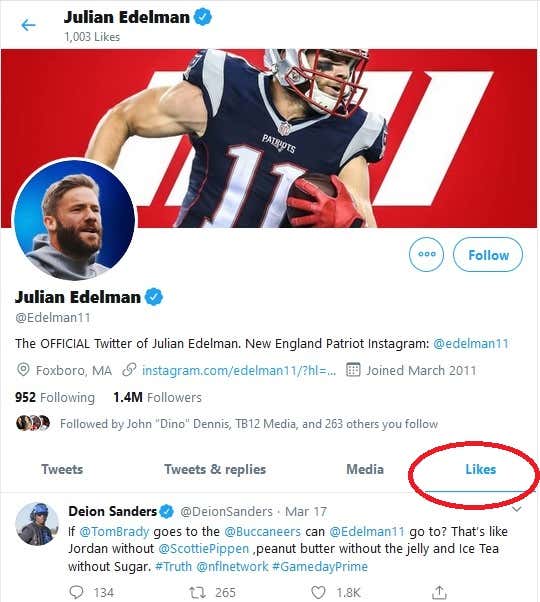 Just when I thought my days of being forced on a daily basis to try and decode social media posts of Patriots players like an older, Irish Catholic Jonah Heidelbaum looking for clues as to how disgruntled they are and what their intentions are, now starts another round.

In early 2019 it was every Gronk post with words that could either be about getting paid more or quoting rap lyrics about tipping strippers. Late 2019 and into 2020 was all about Brady liking the blatherings of Antonio Brown and his own uncaptioned pictures that turned out to be teases for a Super Bowl ad. A Super Bowl ad, I hasten to mention, where he straight up lied to my face.

Now? Now I'm going to have to play this same game with Julian Edelman, I guess. There are any number of reasons why he might like a Tweet from a celebrity who mentions him. Deion Sanders WAS paying him a compliment. Like he did before when he said Edelman would be appreciated more if he wasn't stuck with the stigma of being a white wide receiver. It's simply good manners  to hit the Like button, I guess. I think we've all done it when someone was nice enough to use your handle in a nice post, even if you don't agree with every word of it. So this might be completely benign.

It's just that I've been at this for over a year now non-stop and so far the other times all indicated the player in question wanted out. And frankly it's hard to imagine Edelman wanting to run routes for anyone else.

Besides, why should he be any different? Aside from the communicable disease-ridden beaches teeming with wall-to-wall spring breakers, it sounds like Tom Brady is only thing attracting people to Florida right now.

Why should Edelman of all people not want in on that? I hope I'm wrong. But my track record on this stuff hasn't been real good over the last year. And every time we think we've hit bottom, another continental shelf drops off below us. Like the saying goes, if you always predict the worst, eventually you'll become a prophet.