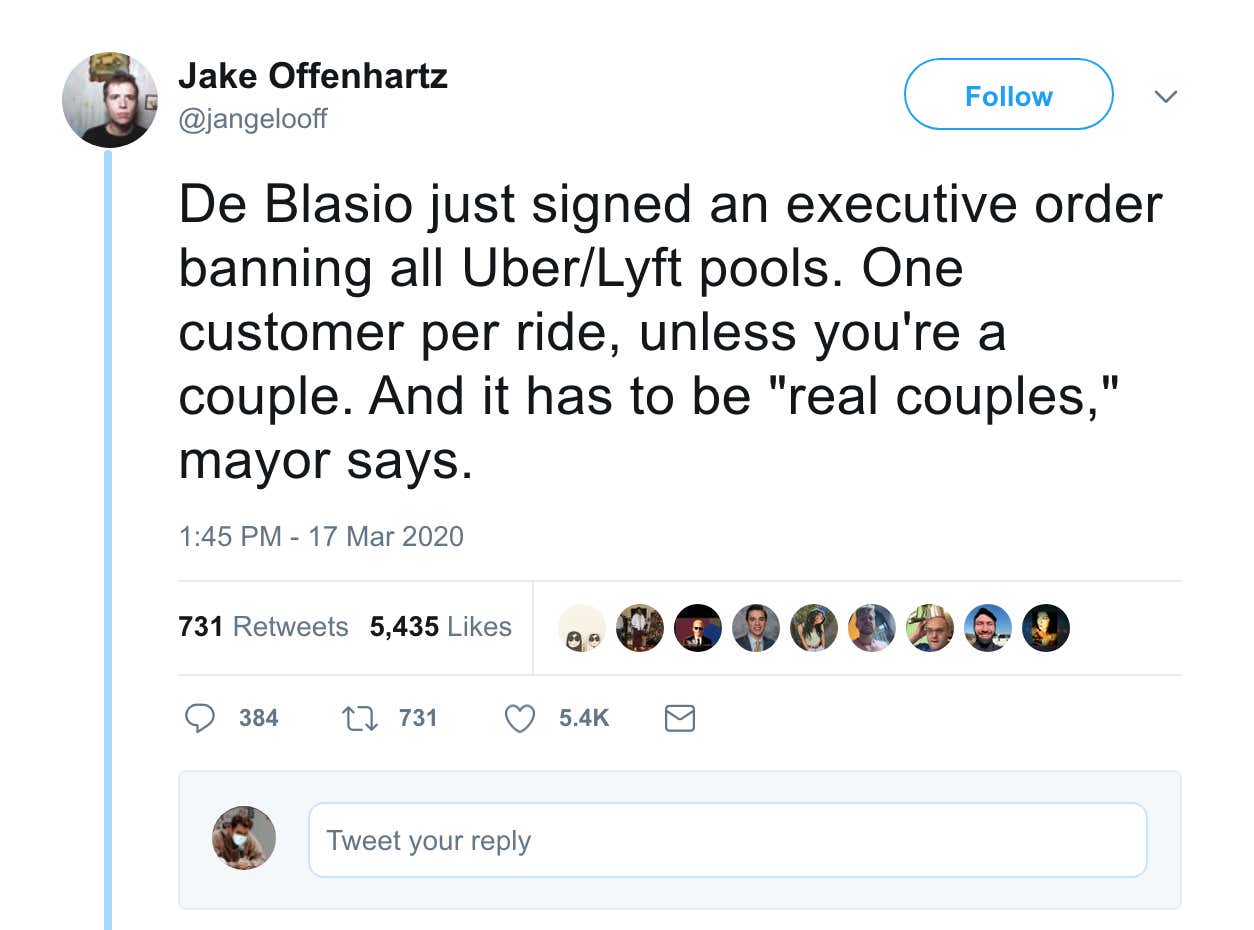 Ohhhh boy. Nothing tests the limits of relationships like statewide emergencies. Whether its a blizzard or a hurricane or in this case a global pandemic, over the last several years New York City couples have been tested by government orders to huddle up and stay inside. Hurricane Sandy was one of the earliest ones. If you lived in a flood risk zone you needed to get out of your apartment for a couple days, and what better place to spend it than with your new boyfriend or girlfriend of like, what, 3 months? Still in the honeymoon phase. Still fucking each other left and right. Still shmoopy shmoopy and cant get enough. But you spend 72 straight hours with someone and you'll start to test the limits of that relationship. She gets kicked into warp speed hyperdrive. Someone is eventually gonna fart. She's gonna have to poop at some point. You'll say something insensitive, she'll say something absolutely moronic. She'll realize you snore, you realize you hate the way she sneezes. By the time the hurricane passed you guys hate each and she's taking plan B because you didnt pull out on night 1 when you guys thought you were gonna get married.

Well now take that and multiply it by, oh, I dunno, a hundred? We're potentially staring down the barrel of months and months of limited contact so choose your quarantine partners carefully. Lotta guys out there thinking with their dicks. Lotta girls out there thinking with their clits. (Is that right? Would that be the equivalent? Idk.) You gotta be smart out there. Think long term on this one. Right now you might be quarantined and lonely and want your new jump off to come over because you got the Hunker Down Hornies. Maybe you're even going back to the well and texting your ex. But the last thing you wanna do is be is stuck with some chick who makes you miserable while they try to save the world from the apocalypse. Sure you might get to fuck while the rest of us are just painting the walls like Randy Marsh getting covered by a Spooky Ghost ectoplasm:

But its not worth finding yourself quarantined in a tiny apartment where 99.99% of the time youre walking on eggshells just to blast your rocks off the other 0.01% of the time. Plus you gotta think about having twice the food, twice the booze, twice the drugs. Share the TV, share the bed. Most importantly....share the bathroom. There is no greater feeling than when you spend the night at a girls place and you finally stumble out of there in the morning to do your walk of shame and as soon as the coast is clear you let out a fart that registers on the Richter Scale. The ground trembles as shockwaves ripple through the apartment building. The Coast Guard responds thinking it was a tugboat on the river blasting a foghorn. Its the ultimate relief. Well guess what? When you're quarantined with someone you're not comfortable with, the coast is never clear. You just eat those farts until they become a part of you. A part of the fabric of your being. The farts just latch on to the inside of your colon until you fill up with air and float to the top of the ceiling like in Willy Wonka:

And then eventually you explode. Like a mushroom cloud over Hiroshima:

KABOOM. You. Her. Your neighbors. Everybody dead. It wasnt the Rona that got em, folks. It was the farts.

So anyway my point here is think twice before you decide you're "Uber Official" with someone. Theres gonna be a lot of girls out there lookin to define the relationship out there who are gonna be sneaky and order Ubers on purpose. Like "Babe. Hey babe. Babe. Baaaabe." all in wayyy to quiet of a voice even though you're 2 rooms away. Then finally snapping and getting angry as if its your fault you dont have super sonic hearing and can understand what shes fucking whispering through 2 walls and a hallway - "BABE!" Finally you hear her and even though you havent even been talking to her you can tell in her screech somehow you're already in trouble..."What??" "Do you want to get us an uber to Kelsey's apartment?" And your dumb ass will start scrambling like "Uhhh I dunno if we can. Isnt it only one person per Uber?" And she'll hit you with that matter-of-fact  "Well its ok because they said "real couples" can ride together. So we're ok." In that matter-of-fact voice with that leading inflection trying to prove you are, in fact, a couple. And then you're gonna find yourself at a very important crossroads. One that will define at least the next 3 months of your life. And depending on how good the rocks are or how hot she is or how dumb and how much of a push over you are, you'll either say one of two things:

"Oh well then I'll just walk and meet you there."

The man who chooses this path? He is a brave, brave soul. He's not easily persuaded by feminine wiles. He's unaffected by the female tears. He has the ability to see and focus on the long term ramifications of his actions, rather than taking the easy, short term out. He knows he's going to get absolutely shredded in the moment but he'll keep his freedom. He's like William Wallace, getting his nuts chopped off right then and there, but standing up for the principles he believes in:

But you know what the funny thing is? Even if you're in that 10%...even if you're one of the courageous, daring men who will stare down Corona Virus and take his chances with the super flu over an awkward quarantine...guess where you still end up? Guess what happens when you look that girl right in the eyes and tell her that you dont qualify for the Real Couples Uber? The girl who was doing all those unspeakable things to you the night before? Just a few hours earlier she was wiping the mascara off her face after giving you one of those blowjobs that sounds like the washing machine when its on the rinse cycle and its sloshing around? The one who was giving you the full treatment...and mean the FULL TREATMENT? Do you know what happens when you look THAT girl in the eyes and you say "Sorry honey, Mayor De Blasio says I cant get in the back seat with you" even though you've already been inside her backseat?

So I guess the moral of the story is we're all fucked anyway. If it aint the Rona that gets ya, its the rage. So you might as well get your rocks off and live like its your last night on this planet. Because with all the crazy shit thats going on in this world...it just might be.