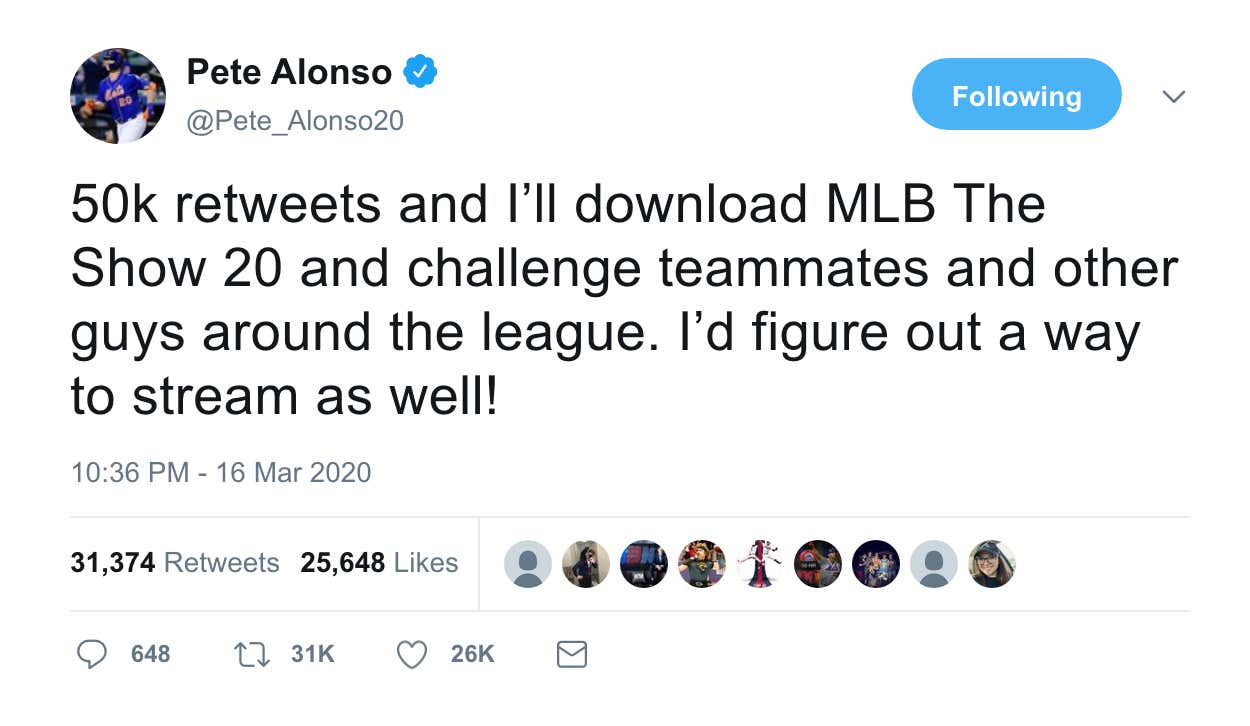 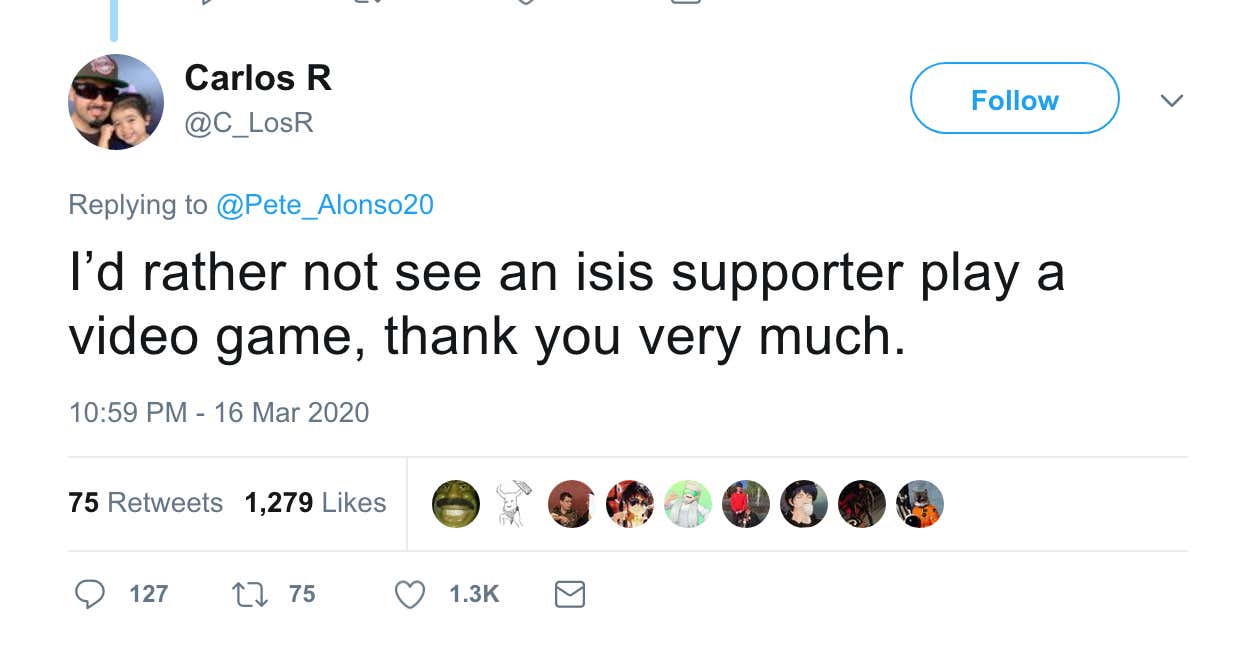 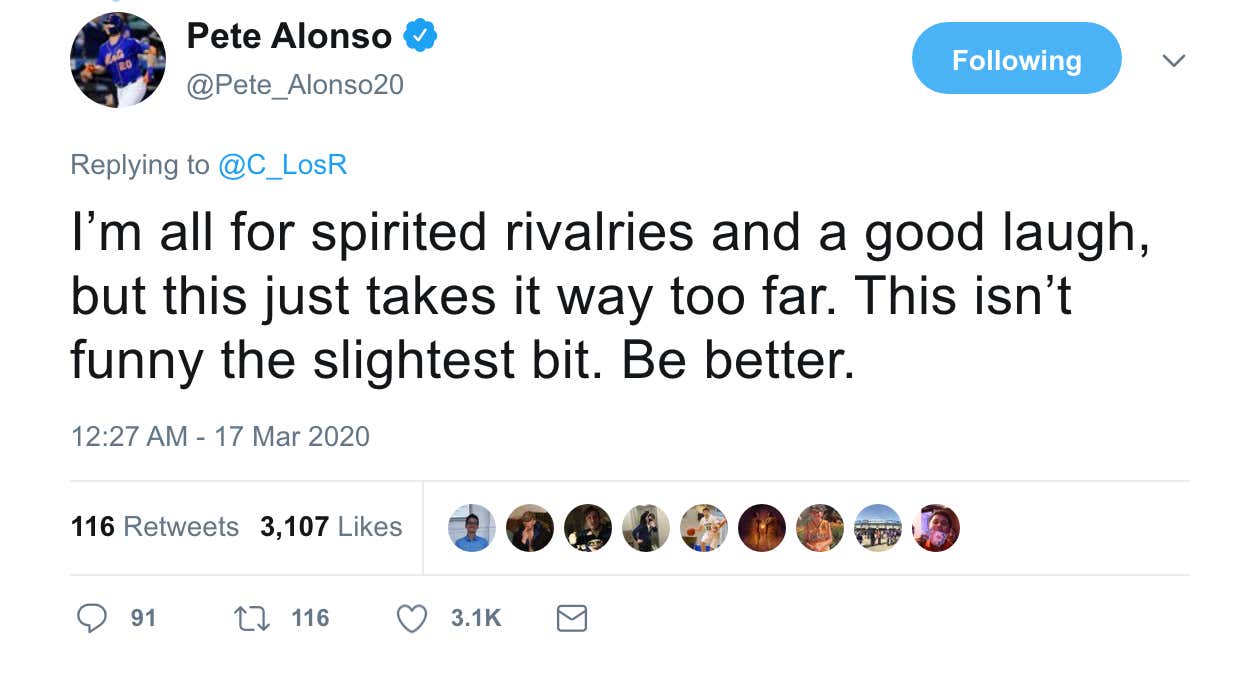 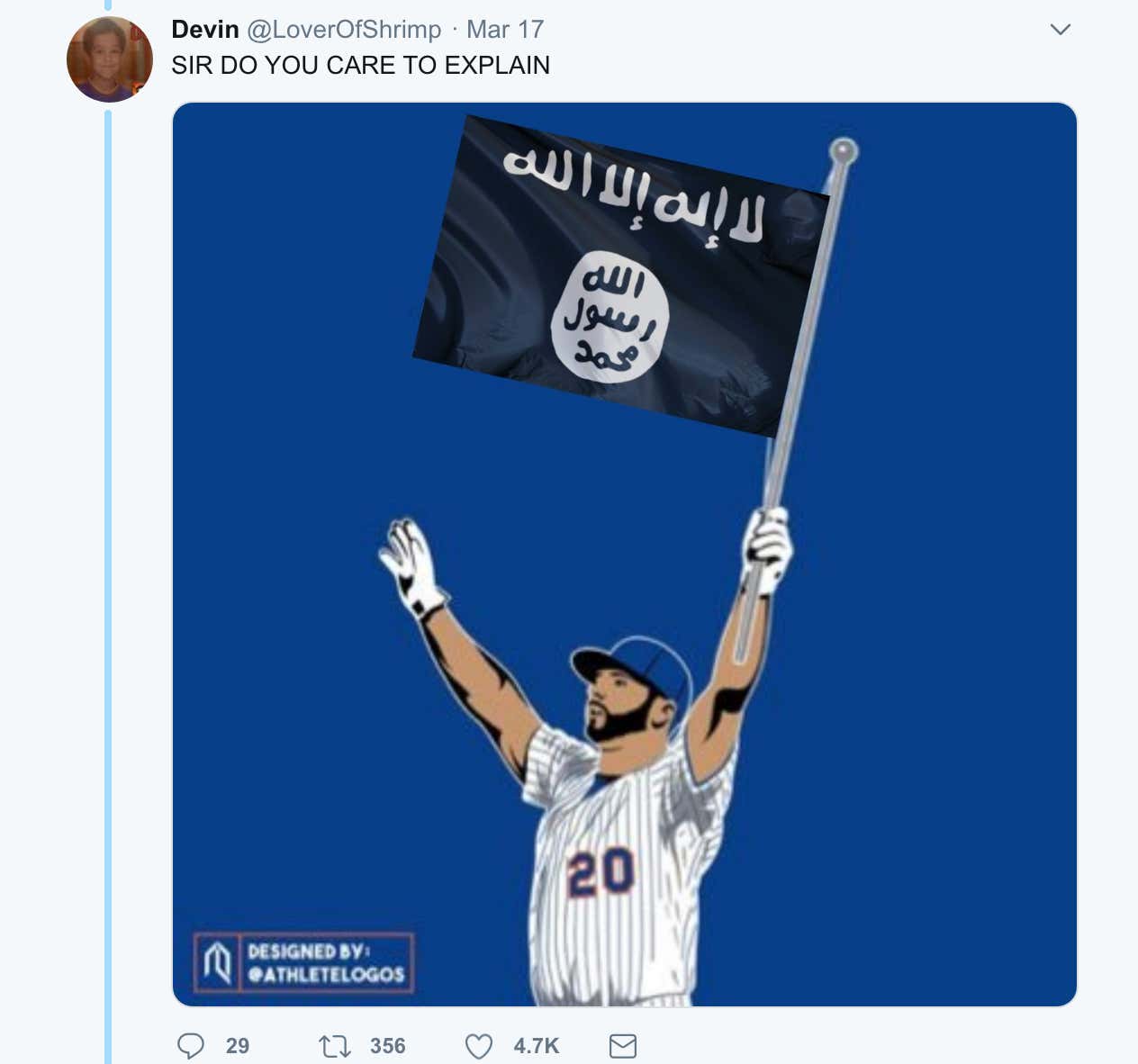 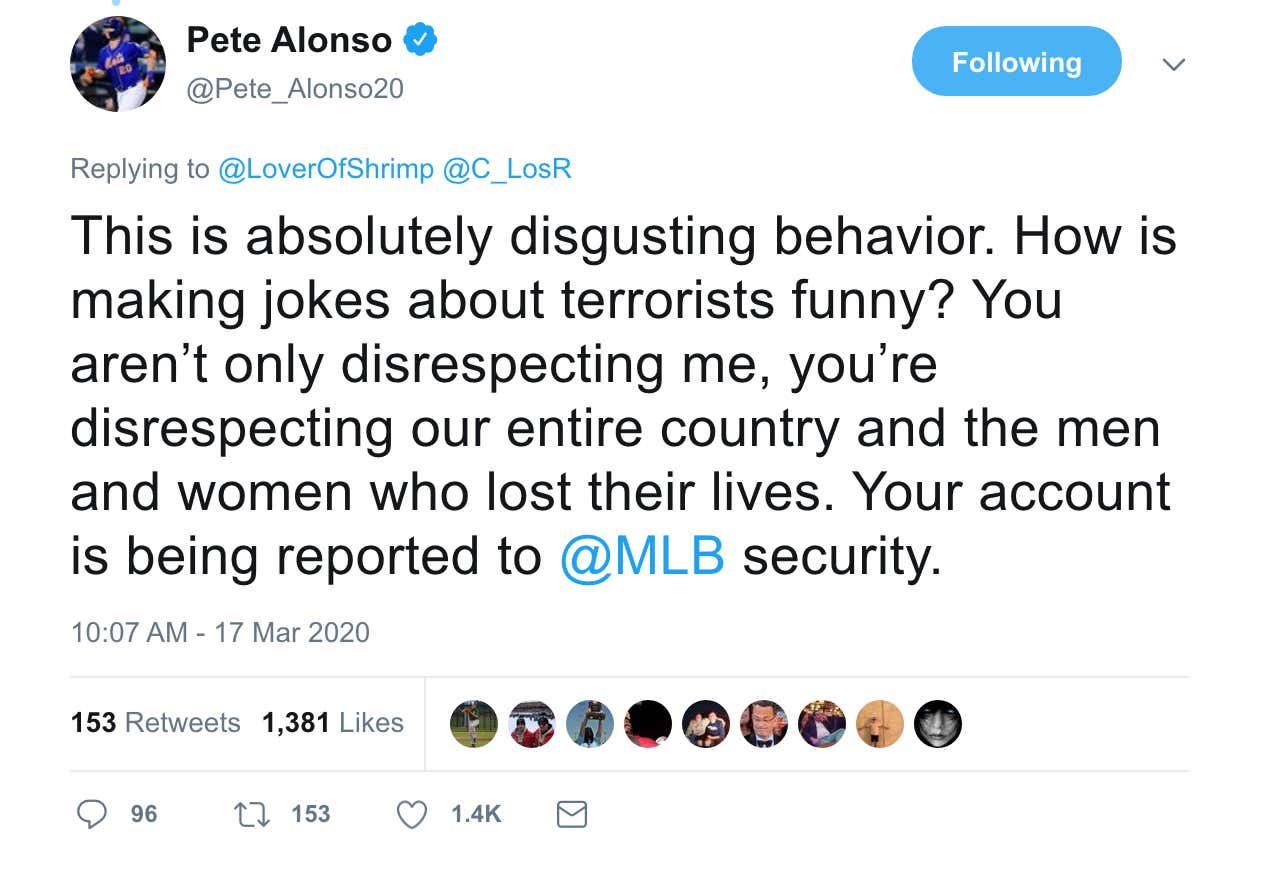 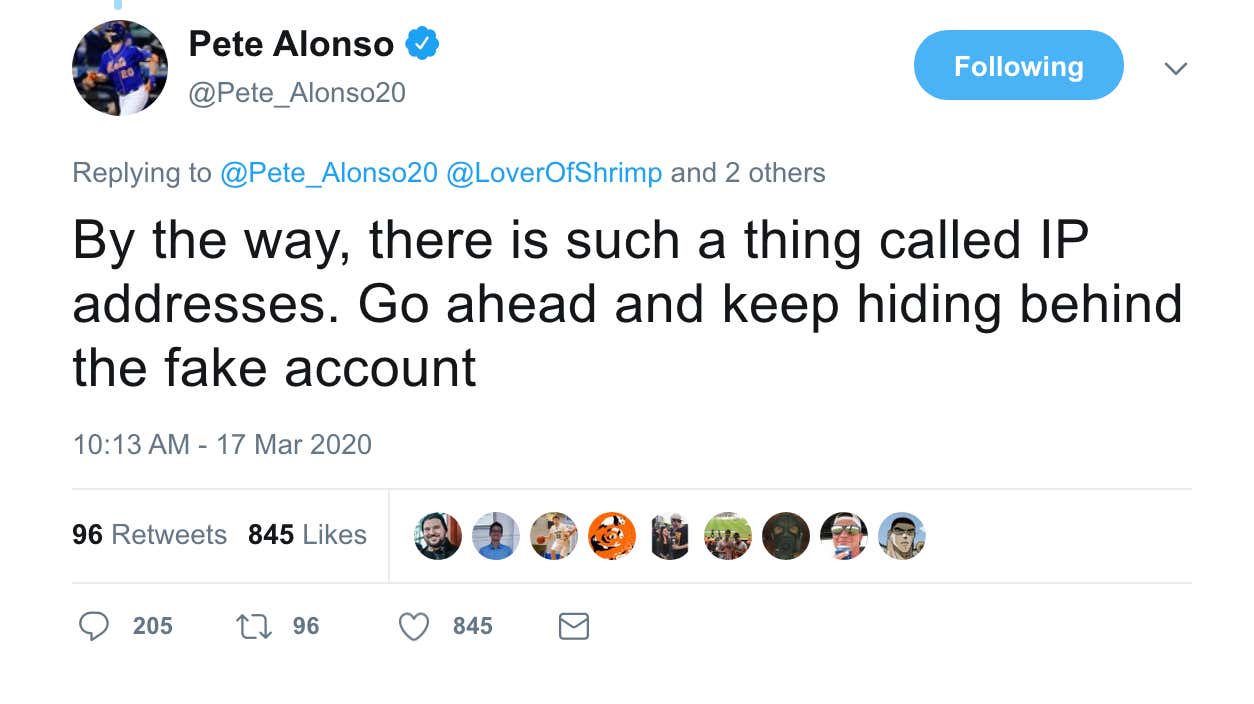 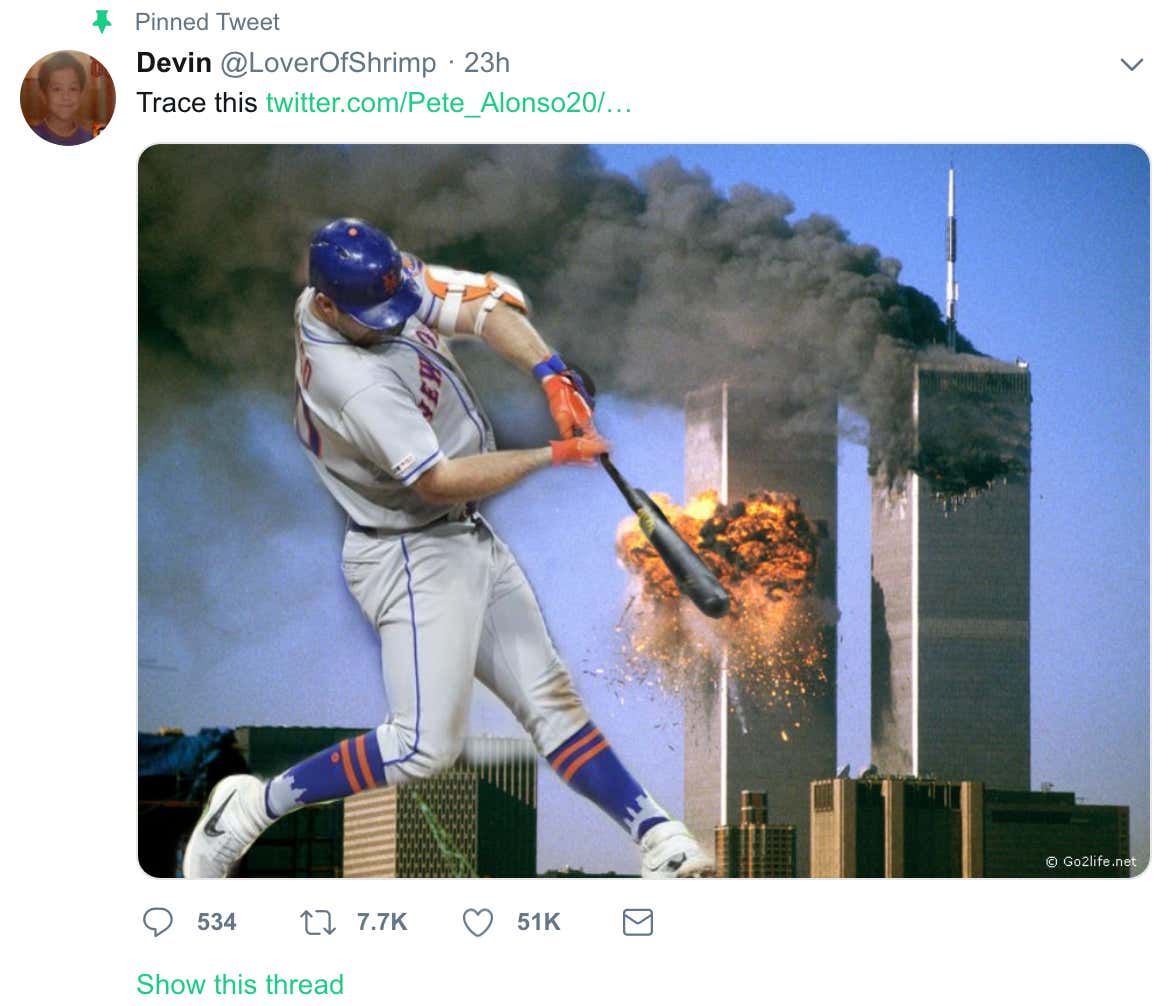 I'll shoot you straight. I'll keep it 100% real. I thought the ISIS flag was funny. I did. The "SIR DO YOU CARE TO EXPLAIN" with the big ISIS flag got a chuckle out of me. I kinda rolled my eyes when I saw Pete taking him seriously thinking to myself "Dont let the trolls win." Letting them get a rise out of you for something that is so patently ridiculous is absurd.

But then I saw the picture of him taking down the Twin Towers. That was a just a taddddddd too much for my liking. Thats a LOT of retweets and likes for a real trashbag tweet. No way you can let that slide if you're Pete. You guys all know me, you know how I roll. Alls fair in love, war, and the internet. If you wanna make 9/11 memes, go ahead. I'm not gonna lose sleep over it. You're a scumbag but its your prerogative. And I cant blame Padres fans. I cant even believe a single Padres fan exists, let alone passionate ones who are taking the time to wage war with Pete Alonso. The San Diego Padres are the single most irrelevant team in all of sports. They are right up there with like, the Florida Panthers. As long as they exist they will simply never matter. The biggest highlight of the last decade or so for the San Diego Padres was a pitcher who got optioned to Single A ball in the middle of last season. Padres fans made up some ridiculous rivalry with Mets fans of Chris Paddack and Pete Alonso for the Rookie of the Year chase. One guy ended up pitching for the Lake Elsinore Storm. The other guy hit 53 home runs, made MLB history and won Rookie of the year.

Honestly its not very often that we get to look down on another fan base. Mets fans are so used to being little brother, so used to being clowned, so used to being the butt of a joke, its rare that we have the upper hand. But the Padres are that insignificant. I dont care about Fernando Tatis Jr. Dont care about Mailtime Machado. Chris Paddack is the biggest hardo on the planet. None of it matters because as long as you're wearing a Padres jersey, you will never, ever matter. Fathers fans will chirp Pete Alonso till the end of time, I'm sure. And I hope Pete learns to just keep blasting balls into another dimension while he lets the 10 or 11 Padres fans make Holocaust memes and shit. Its the one time we Mets fans get to big time another fan base and brush them off as nobodies. I suggest Pete do the same thing.