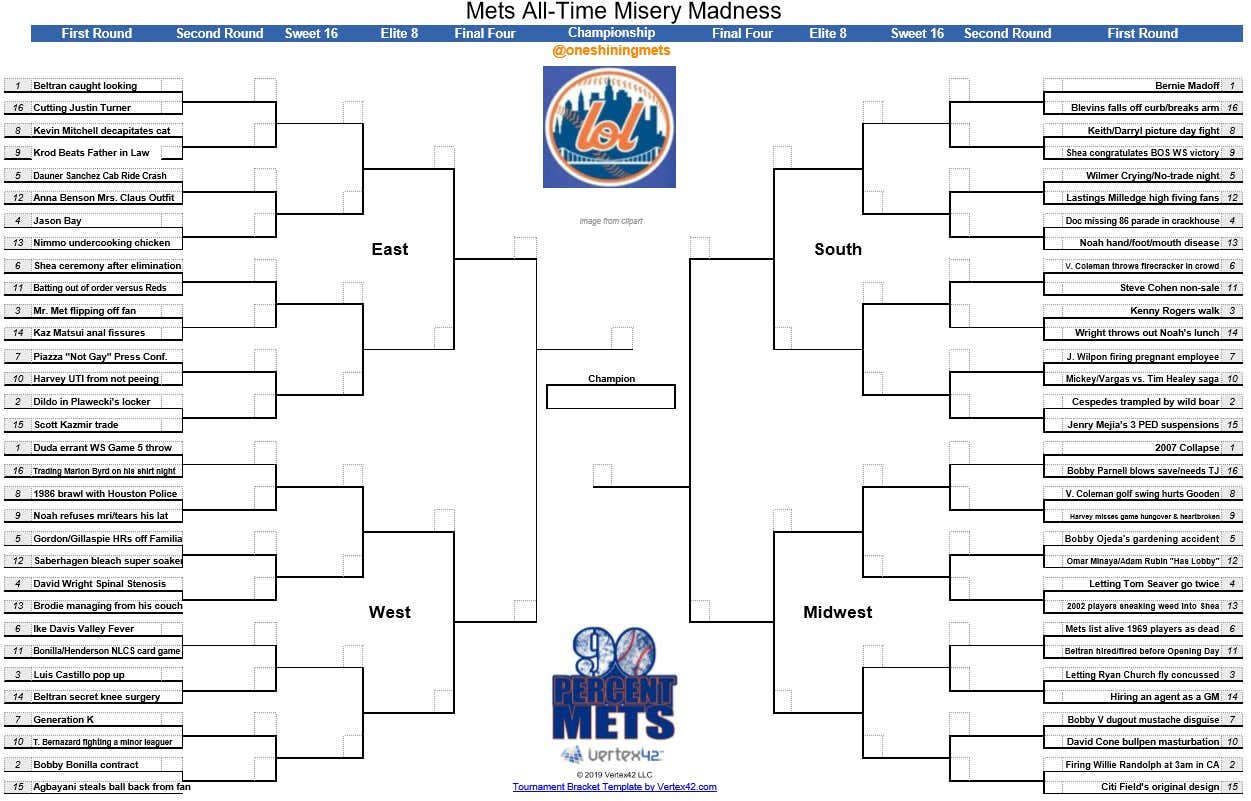 Look, I'm just as upset that we don't have the tourney as the next person. Nothing beat staring at a bracket for hours, having some random website's blurbs make 90% of your decisions for you, and watching chaos unfold because THIS IS MARCH.

But bitch boy covid has cuncelled that, so why not fill out a bracket full of 1 seeds that twisted rusty knives in your soul to keep your brain moving during the quarantine? The Mets haven't even been around 60 years and I feel like there could have been AT LEAST another 64 entries to this list such as trading Nolan Ryan, the Murphy World Series error, or an MLB record 140 losses in their first season. Duaner Sanchez's doomed cab ride is a 5 seed despite it not only cost the Mets a World Series in 2006 (at least in every Mets fan's mind) but it also opened the door for Oliver Perez to get shipped to Flushing with Roberto Hernandez for Xavier Nady. If you include the fallout and Butterfly effect of everything, Duaner Sanchez's taxi getting smashes is essentially the the Archduke Ferdinand assassination of Mets Misery and all that misery is packed into a 5 seed. But when you have the face of the franchise and pretty much the nicest human David Wright getting something called spinal stenosis that essentially ended his career after signing a massive contract as a 4 seed, you realize that when it comes to Mets misery, every game is pretty much a coin flip.

Considering the Mets have numbed my soul to any kind of pain, I actually did laugh at some of these moments that ripped my guts out when they happened. Kevin Mitchell allegedly decapitating his girlfriend's cat taking on KRod beating up his father-in-law was a real beauty of an 8-9 matchup. Mike Piazza having to call a press conference to announce he is not gay still doesn't seem real all these years later. Just typing it blows my mind considering where we are in 2020. And Bernie Madoff being the 1972 UCLA Bruins of this whole bracket has me actually respecting that goddamn crook more than I should.

Anyway, here is my breakdown of the bracket.

EAST: This is an absolutely STACKED region. I think Beltran caught looking, Mr. Met flipping off the fans, and the Shea Goodbye ceremony after the 2nd straight September collapse all could have won any region. I am going with Mr. Met just because this GIF sums up life as a Mets fan perfectly.

WEST: It's pretty much David Wright's career just getting snatched from him out of the fucking blue by something I have never heard of before or since vs. Bobby Bo's contract. I'm picking D Wright because he is eeeeeeasily my favorite Met ever, the Bobby Bo deal was actually a good deal for the Mets, and Darren Rovell is the face of Bobby Bo Day which makes me hate giving Bobby Bo Day any more attention than it deserves.

SOUTH: Bernie Madoff is Thanos and everyone else in this bracket is The Avengers in Infinity War. Jeff Wilpon has been a meddling asshole for years but getting ripped off by Madoff gave the Wilpons an excuse to run their New York franchise like a Pittsburgh franchise even after they got their money back.

MIDWEST: Citi Field's original design is a very live 15 seed here because the Wilpons taking all the good will that comes with a new baseball stadium and flushing it down the toilet by paying homage to the Dodgers is so reckless I almost appreciate it. However, Citi Field was still an awesome stadium even when you had no clue whose home stadium it was. I gotta go with the 2007 collapse because we pretty much died in slow motion during that last month and the numbers 7 and 17 instantly send chills down my spine. Fuck the Phillies.

FINAL FOUR: Mr. Met flipping the bird is funny and clearly a LOL Mets moment. But this is a misery bracket and seeing what happened to David Wright is about as miserable as it gets. And while 2007 was gutting, 2006 and 2008 didn't end in great fashion either. But Bernie Madoff changed the Mets DNA and it will not change until someone buys the team, which I am starting to believe will never actually happen after Uncle Stevie backed out.

CHAMPIONSHIP: Dread it. Run from it. Destiny arrives all the same.

These are just my picks though. Follow @OneShiningMets on Twitter to vote on matchups as they go or leave your champion along with a 5 star review on the We Gotta Believe iTunes page for when we break down these picks on next week's episode. And I gotta shout out @90s_Mets for doing a 32 team bracket a little while ago that I meant to blog but it came out right around when the Steve Cohen news broke and I got super busy/depressed covering that fucking mess. 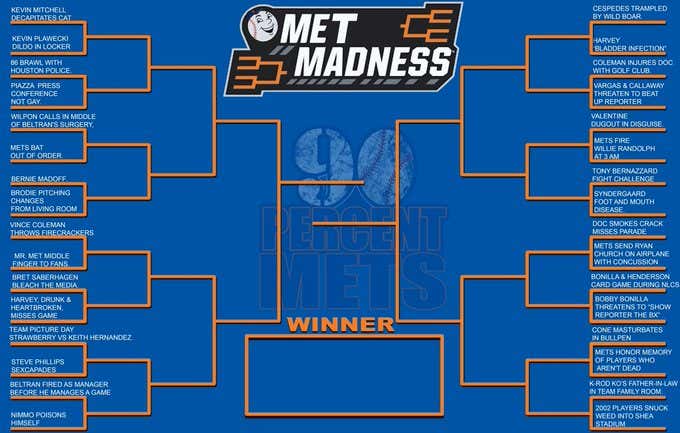 P.S. Based on the amount of misery I have experienced in my lifetime as a Mets fan as well as last year, I am more than fine with MLB taking their time with Opening Day. I'm not ready for more contenders to be added to next year's bracket.