If you type something like "Bored Marines" or "Bored Soldiers" into YouTube you'll get a zillion videos like the ones above, and there's good reason for that.. They've adapted to doing a whole lot of nothing.

That might sound bad, but on today's episode of ZeroBlog30 we elaborate & share how their knowledge could be helpful to YOU.

Millions of people around the globe are laying low in their homes on Coronavirus induced self-isolation, and all most of us can really do is wait. Cabin fever, feeling stir crazy, loneliness.. there's many frustrating things that arise from this. So take some advice from the #1 experts on waiting around - our enlisted U.S. military members.

Every recruiting commercial you see for the different branches makes it looks like non stop action. Slaying dragons in Dress Blues, the flash of rounds through night vision goggles, running onto helicopters as the desert sands swirl, jets streaking across the sky...

The reality is that yes, there are times of intense, badass training & action, especially for combat jobs, but overwhelmingly? You're standing in a formation, or in a long, non-moving line, or loitering in a smoke pit (cig area/hangout spot), or clumped together in some shade, or on rickety old bleachers, or sitting in your barracks room until further instruction but you can't go anywhere else… and you're just.. waiting.

For what, you don't always know.

Maybe it's to turn in or get gear at supply, or for your Commanding Officer to come out of his office and release you for the weekend, or for the armory to open so you can get your weapons, or for someone to come inspect your room, or for the buses to come pick you up from a field op, or your command didn't have a solid training plan for that day… The reasons are endless.

The worst part is that if you look like you're doing nothing long enough, the higher ups (who's orders are literally the reason you're waiting around in the first place) will get mad at you for doing nothing, and then they play what are known as 'fuck-fuck games' with you.

Oh good. Good. You're just gonna stand there? Well now you can take these brooms and go sweep that enormous parking lot for no reason.

Oh, so we just want to sit around? Now you can all get in line & pick up every cigarette but over a 10 acre radius.

You get the idea.

So our enlisted military members get really good at staying out of officer's sight lines & passing the time however they can. 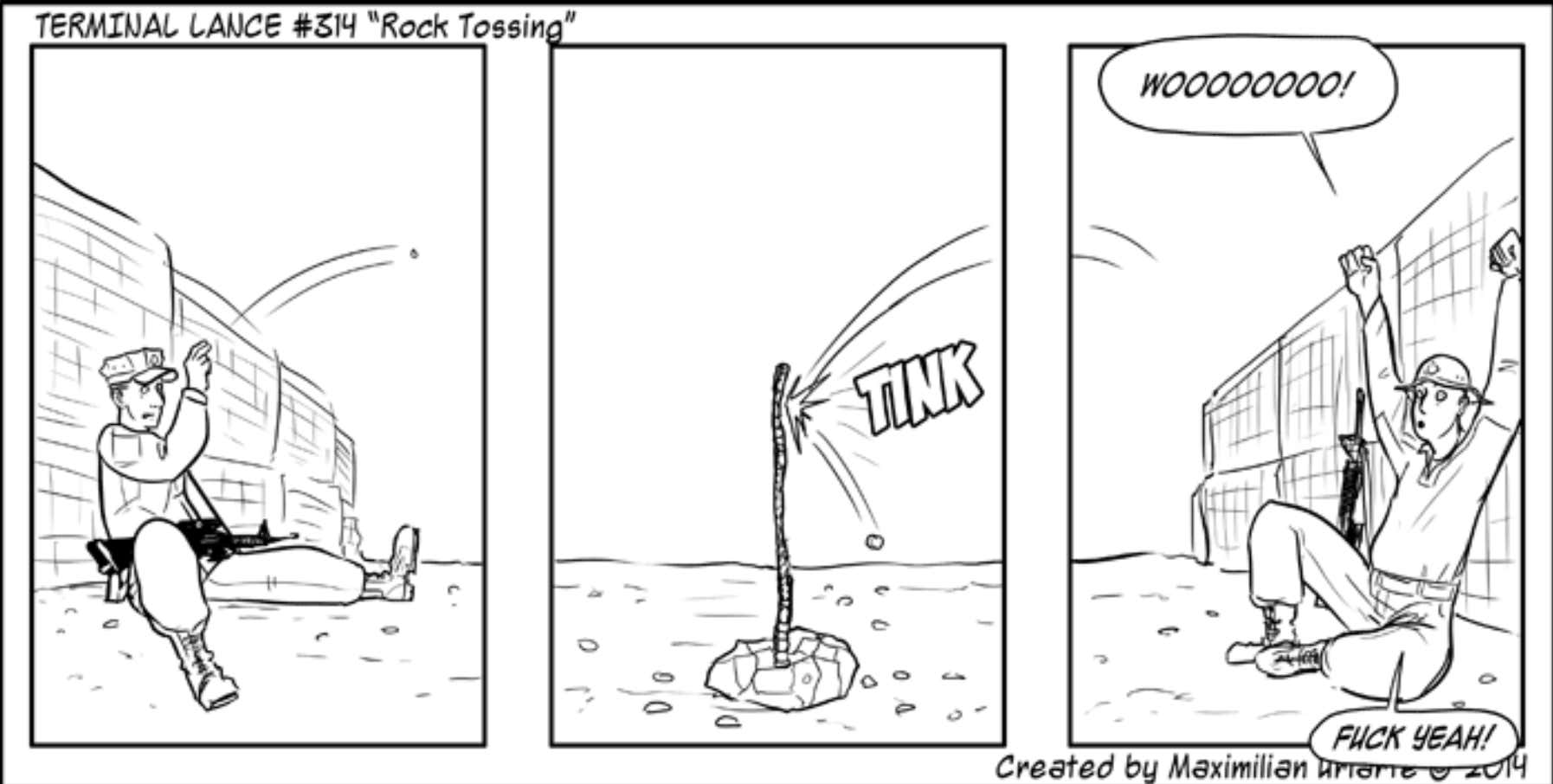 From my experience, it's usually troops sitting around or all facing a distant object (usually another, larger rock) and trying to hit it with more rocks. Sometimes it's a pole or an ammo can, but whatever the target is it's always thrilling when someone hits it. If you think I'm exaggerating we got A LOT of responses like this:

Here's some other common military pass-times from our followers in case you're looking for stuff to do:

Eating gross stuff on a dare, or just to impress your buddies:

Card games, primarily Spades (we played Spades so often & intensely on my 1st deployment that people would get in actual fights over it):

Have a race against time or your buddies to see how fast you can eat something difficult to speed eat like a huge cracker or a honey bun:

I could go on & on, but I'll end it here because you can get the rest on the most recent ZeroBlog30. Hurry up, don't wait!

***Final note: sending good vibes to all the troops stuck on deployments due to holds from the virus. We've gotten a lot of DMs from guys & gals who were supposed to be coming home but now they don't know when they'll be back. In the meantime they'll be continuing to serve our country… and probably throwing a whole lotta rocks at other rocks.