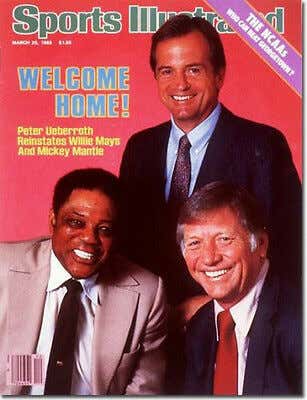 The Baseball Hall of Fame had yet to rule against inducting players on the banned list when Mickey Mantle and Willie Mays were punished by Major League Baseball. However, both were not allowed to participate in the sport that made them legends due to the swift iron hand of Bowie Kuhn. The former commissioner who retired before the postseason in 1984 had a zero-tolerance approach to gambling, even legal gambling in casinos. This led him to had Lifetime Bans to both Mantle and Mays, who were merely doing commercials and public relations work for casinos in Atlantic City.

Willie Mays was inducted into the Hall of Fame in 1979. At the time, he was a part-time coach with the New York Mets. The Mets were paying Mays $50,000 for also working public relations, a position he had held since retiring after the 1973 season. Shortly after casino gambling was legalized in Atlantic City, Willie Mays received an offer to work with Bally’s Park Place. The offer paid Mays, $100,000 a year to appear at the casino and do television commercials. A similar offer was given to Mickey Mantle by the Claridge Casino in 1983. At the time, he was paid $20,000 a year to work with the New York Yankees in Spring Training. Despite not having any effect at all on the game, Kuhn demanded they return the money and break free of the casinos, or face banishment. Both objected to Kuhn’s assertations and continued their work with casinos, leading to the ban.

Among the work, that Mickey Mantle did with the Claridge, included appearing at charity fundraisers, making the Bowie Kuhn banishment among the most controversial acts of his 16-years as commissioner. When it came time for another term, several owners had lost faith in Kuhn, leading to the decision for him to step down in 1984. Peter Ueberroth, who helped organize the 1984 Summer Olympics in Los Angeles, would take the job upon completion of his Olympic duties and the start of the postseason. Among his first acts was to reinstate Mickey Mantle and Willie Mays. The news was well-received by baseball fans, as both Hall of Famers with Ueberroth appeared on the cover of Sports Illustrated the following week.