This is a rumor that is floating around out there. The NHL has a real problem on their hands with the playoff revenue and the NHLPA with escrow. They need to get creative and this is certainly a way to do that. These are the standings as of right now 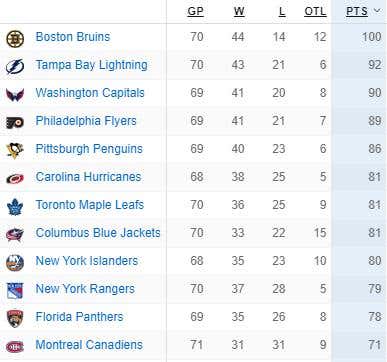 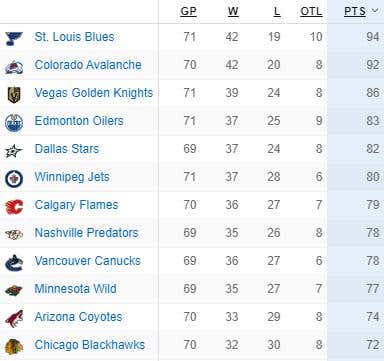 The proposal allegedly on the table would be a format that has the top 12 teams in each conference qualify for the playoffs. The top four teams in each league would get a bye to the second round. East bye teams would be Boston, Tampa, Washington, and Philly. West would be St Louis, Colorado, Vegas, and Edmonton. Then you'd have a 5 vs 12, 6 vs 11, 7 vs 10, and 8 vs 9 in each conference. How real is this idea? According to Dreger it is "strong" option

My first instinct is to push back because the NHL playoffs in their current format are spectacular. I am hestitant make any changes because I don't want to open pandora's box on future wacky changes that Bettman might come up with to squeeze another penny out of the league. Having said that...there is no "fair" way to end the regular season. How do you explain to Islanders fans that their team didn't qualify because they had one less point than CBJ when the season was suspended when the Islanders have two games in hand? Vancouver would be left home on a tiebreaker with Nashville when they have the same amount of points. Not only is it more fair, but it is also more games and the league desperately will need the revenue from extra playoffs. And also..it'd be fun. Give me a best of 5 in the first round. Look at some of these matchups

Pittsburgh vs Montreal...the Belle Center would be ELECTRIC in a short series vs Crosby and the Penguins

Toronto vs New York Rangers. Orginal 6. Biggest cities in their countries. Bomb uniforms. Star power for days. Pump it into my veins

Dallas vs Chicago. The Hawks are NOT a great team but they're officially the team nobody wants to play in the playoffs. Historically the 12-5 matchup is upset city. Are you betting against Toews, Kane, Keith, and Crawford in a short series? I am not. I need it. And then guess what...Stan gets to say that he made the playoffs

And you know what…if you're going to have 24 teams involved in the playoffs then you might as well get all 31 teams in the game. Take the remaining 7 teams and put them in their own tournament. I don't know how you would format it, but have these teams play for the right to win the #1 pick in the draft. You compete your ass off down the stretch and you get to add Alex Lafreniere to your squad next year. Tell Jack Eichel he can finally add another legit franchise type talent to his wing and he will play his fucking ass off and all of Buffalo will be locked in for that tournament. Same for Detroit. That would be incredible drama. Make it happen, Gary.