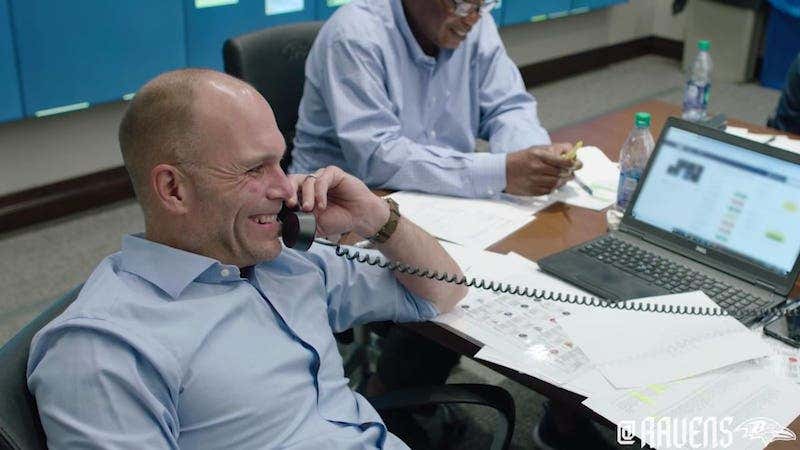 Holy hell Eric DeCosta did it again. This guy has been GM for little over a year and he has already made a habit of fleecing the league’s other 31 GM’s. Just in the last 8 months:

– Traded a backup kicker/punter to the Vikings for a 5th round pick. This kicker/punter ended up being cut by 2 teams in the month that followed

– Traded Kenny Young, a linebacker who had fallen to the bottom of the depth chart, along with a 5th rounder to LA for a 26 year old Pro Bowl cornerback

– Traded that very same Vikings’ 5th round pick for a 5-time Pro Bowl DE, a position of extreme need.

That’s right. Eric DeCosta essentially parlayed a kicking specialist who had zero value outside of the allusion that he was worth anything more than the tee he kicks off of for a 5-time Pro Bowler. Who says the preseason doesn’t matter?

Having Justin Tucker pays dividends yet again. Life is grand when you can exploit the rest of the league’s desperation for kicking competence against them. Just a masterpiece in the art of leverage by EDC, just like the guy who flipped a red paper clip for all kinds of knick knacks until suddenly he traded his way into a house.

But anyway. This is about Calais Campbell, a guy who has proven time and time again that he’s one of the league’s very best pass-rushers. By the end of last season, you could make a case that the pass rush was the one area on the Ravens that had room for improvement. Matt Judon carried that element of the defense, but got little to no help from his position group. This gets us back to where we were for 15 years while Sizzle was in town.

Time and time again, the Ravens paired up Sizzle with another pass-rusher to wreak havoc off of both edges. His rookie year he was Peter Boulware’s intern. Later he had Trevor Pryce and Elvis Dumervil as veteran partners. Now, for at least the 2020 season it would appear, the Ravens are going to pair Judon and Campbell together. Provided they don’t trade Judon, they’re set up to give offenses a lot to plan for in pass protection.

On a related note, the Judon situation is an evolving one. The Ravens placed the franchise tag on him last week, which will pay him handsomely in 2020. But, like anyone would, Judon wants a promise of long-term stability and a payday well into the future. Re-signing Campbell through 2022 buys some leverage in negotiations with Judon. His number one bargaining chip was skipping town and leaving the Ravens in dire straits at the edge position. Now that chip’s been taken away from him. We would love to have him around long-term and I hope we do, but this is great positioning by the front office for long-term cap health. If he has to walk away after next year, we’ll all be sad but there will be time to figure out a long-term solution as Campbell’s play declines into his mid-30’s.

All in all, it’s really hard to see where the Ravens have a weakness going into next season. Marshal Yanda’s retirement puts them in a precarious position on the interior OL, but the Ravens always seem to find solutions at guard. Wide receiver could use some depth, but as long as there are guys like Snead and Boykins who can block downfield, this offense will eat. Every other position group is top notch. This team is built to win NOW and in the long-term. Great time to be a Ravens fan.

In Eric We Trust.