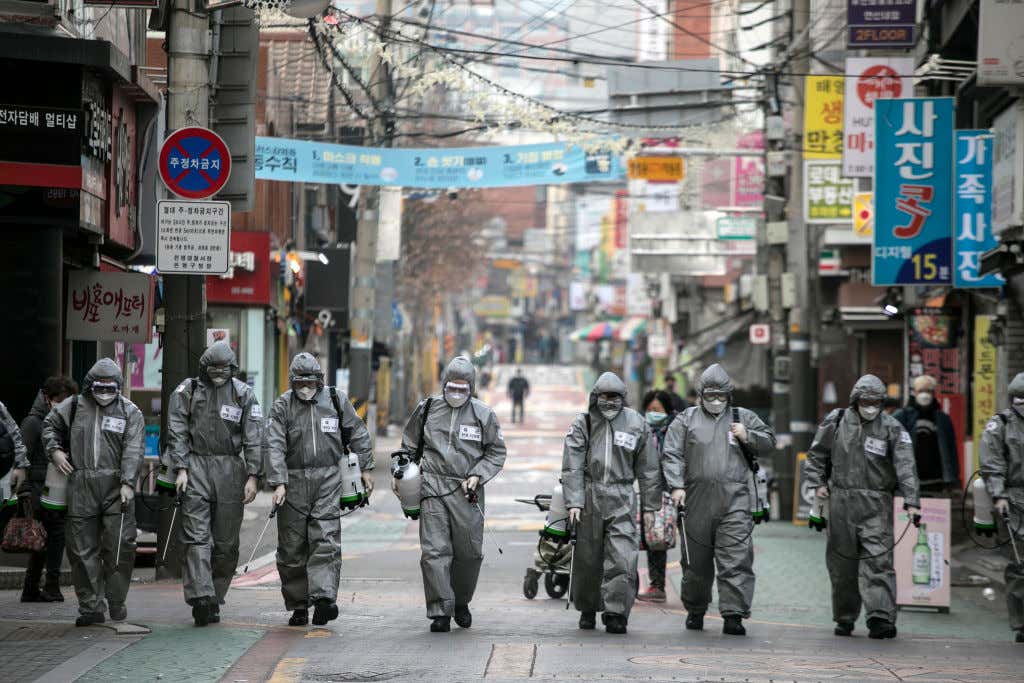 Reuters — South Korea has announced hundreds of new coronavirus cases in the space of only a few days and raised its infectious disease alert to the highest level.

The new outbreak has pushed South Korea’s tally of confirmed cases much higher than anywhere else outside of China.

South Korea managed to avoid a major outbreak with only 30 people contracting the virus, despite many interactions between those later confirmed as being sick and hundreds more people being identified as contacts of the sick patients...

This changed with the emergence of “Patient 31.”

I know a thing or two about being hated by larger-than-average groups of people, not the best feeling in the world but whatever, you get used to it and learn to block it out. Mostly just anonymous internet people looking for a place to outsource their anger to feel better about themselves, not that big a deal, I'm happy I can perform that service for them. Everyone I've ever met in real life out in public has been awesome so that's all that really matters.

I am wondering though how many people is TOO MANY people hating you where it becomes a little too tough to deal with. What's like the tipping point number where it's hard to just be alive because so many people despise you?

I think we might get a chance to find out actually.

You've all seen my guy KFC — or should I say Dr. Kevin Clancy PhD and the D stands for Disease Crusher — come out of nowhere to become Barstool's foremost Coronavirus expert and single-handedly flatten the curve and end this pandemic. He's taught you the key: stay home. Isolate. Quarantine. Socially distance yourself.

Me personally, I've been isolating since day 1. Oh no no no, don't call me a hero. Don't thank me. I just literally prefer to isolate at all times, pandemic or no pandemic. Basically I just have an excuse now. I don't have to invent alibis and shit. And that personal preference just happened to work out in me being a considerate person.

I would urge you to read the actual article from Reuters.  I just wanna give you a real quick summary of the Patient 31 story in South Korea because it's a good lesson. At least I know it was for me. You may not think too much or even really care about what could possibly happen to some random old person if you go out and travel around. But you definitely do NOT want to be Patient 31.

On January 20th, a 35-year-old woman flew from Wuhan China into the international airport for Seoul South Korea. She was isolated as soon as she entered the country — she became the first confirmed case of Coronavirus in SK.

One month later — 4 weeks after the virus was confirmed there — South Korea had 30 people with the coronavirus. Could have been more, testing wasn't perfect obviously, plenty of variables. But, official word from experts: Thirty (30) people with coronavirus.

Keep in mind, while there are thousands of conflicting opinions everywhere, one thing that has been generally agreed upon by a majority of expert opinion: South Korea is the country that was best prepared for this virus and who handled it the best. After MERS, they had made a bunch of key reforms, so when COVID-19 struck, they were able to test 10,000 people a day almost instantly. As of yesterday, they had tested 1/4 of a million people, found 8,000 cases, and set up effective quarantines which kept their death rate at 0.9%.

Basically the point is, South Korea was on top of their shit more than anyone else. They knew what they were doing.

So how did a relatively contained virus there, that affected only 30 people, explode to over EIGHT THOUSAND less than a month later?

If you look at the chart from Reuters of those 30 cases they had for a month, it was simple to understand where it came from. Family members, couples, and direct face to face interaction with a common group or meeting of people. This crazy contagious, insanely unpredictable disease was, in South Korea, as well understood and contained as it possibly could be.

Saturday: a cluster of 9,300 people had 1,200 people complain of symptoms. Hundreds of Covid cases confirmed.

A second cluster was announced soon after.

Cluster #1. Cluster #2. Hundreds of new cases and infectious disease alert at the highest level. An uncontrolled outbreak after a month of only 30.  All from one person. Patient 31.

You can read articles and look at charts and fancy interactive graphs about social distancing. Here is a really easy way to understand exactly what it is and exactly why it's important.

The way to social distance is to do the opposite of this: 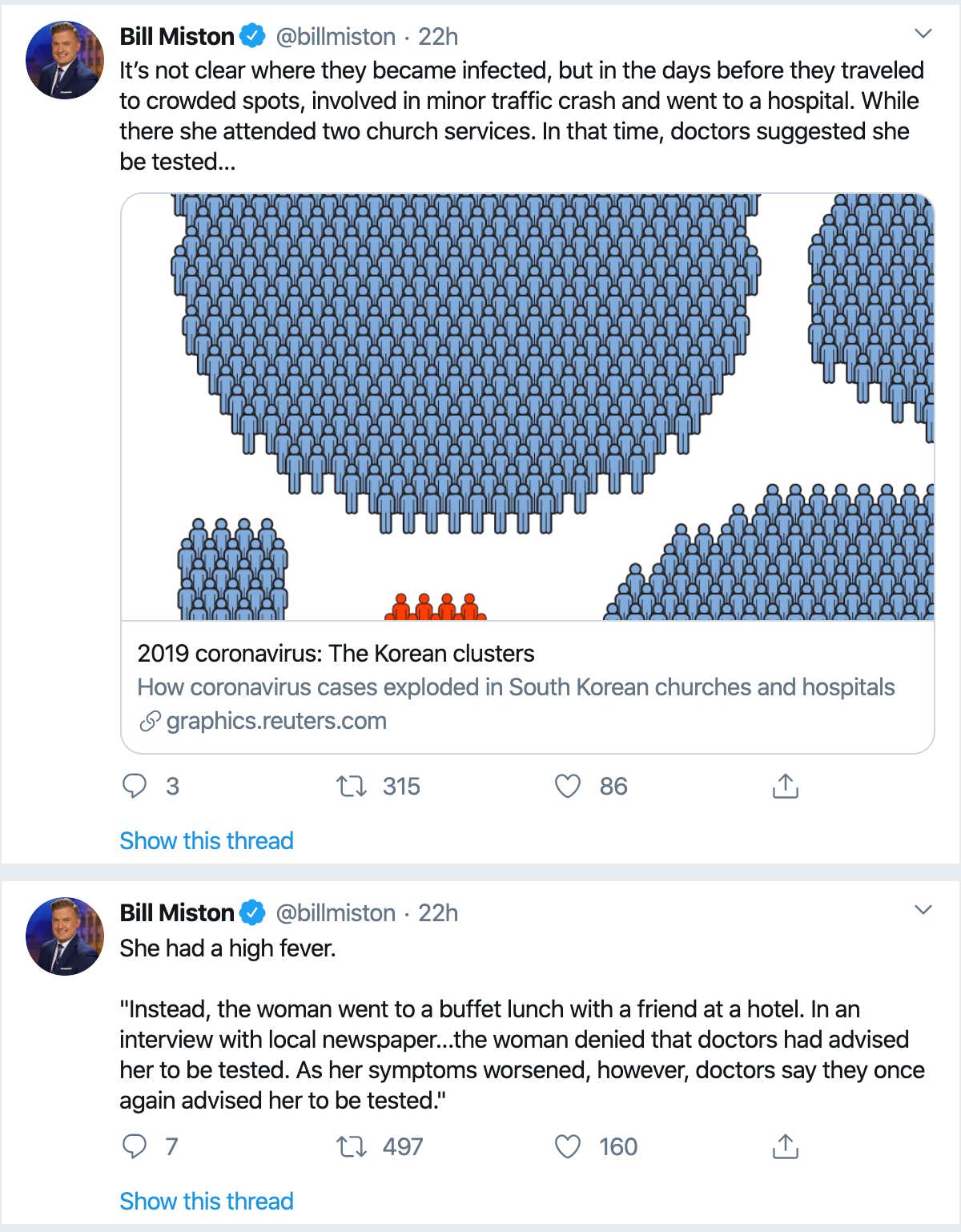 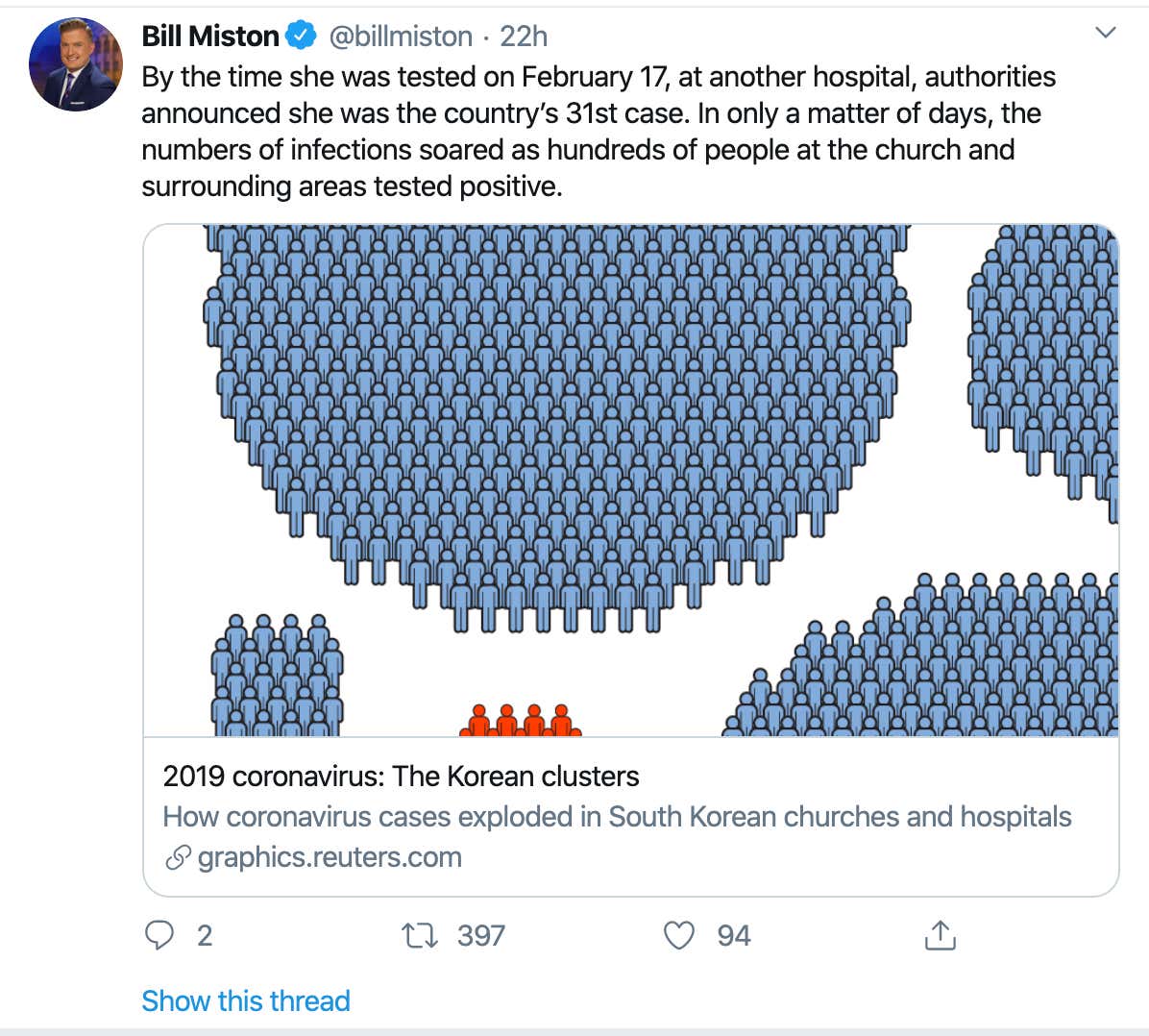 Yes you read that correctly.

Yes doctors told her to get tested. Because she was sick and had the symptoms. Of the literal pandemic disease.

She said no and went to a hotel buffet breakfast.

Social distancing is not going to two churches, two hospitals, as many crowded places packed with people as you can, and a fucking BUFFET breakfast when you are feeling ill and doctors are telling you you're ill during a worldwide virus crisis.

Good luck getting back out there in society P31!

Real talk, can you charge murder here? Or more manslaughter I guess. I mean I'm guessing no but this is like, Mass Manslaughter caused by nothing but selfishness. Anything past the point that she was told by doctors to get tested — if I become Head of Police in South Korea in the next few days, I'm pushin for it.