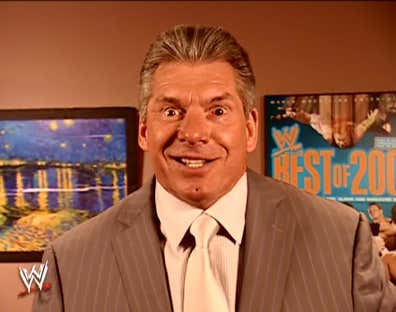 Yesterday, after the whole March Madness/NBA season shutdown, I began to consider the realistic possibility that WrestleMania would be cancelled.

I know that Vince McMahon - the same guy who regularly puts on blood money shows in Saudi Arabia and ordered Over the Edge '99 to continue after Owen Hart passed away in the middle of the ring - will do pretty much anything in his power to convince the world that it'd be alright to precede with the "Showcase of the Immortals" on April 5th in Tampa, but I just don't know if he'll be able to pull this one off. For context: last year, 82,265 fans from all 50 states and 68 countries attended WrestleMania 35.

I barely even thought about the tweet before I sent it, to be honest. I know a hard reset on the product would never and could never happen at this stage in the game. It was just kinda my way of saying, "Jeez, we're three weeks out from WrestleMania and I just don't care no matter how hard I want to. I wish EVERYTHING about the product was different", because that's how I feel.

Many compared the idea to the hard resets that WCW took in 2000 - which, contrary to popular belief, weren't the issue with WCW in 2000 - and just generally tried to quote tweet drag me to their 312 followers all night. It was frustrating knowing 90% of those bringing WCW up have never actually seen the television they were talking about, but I still knew this wasn't it, Chief Jay Strongbow.

So I made a second offer; my olive branch to wrestling twitter, if you will…

This idea has been received much better than the original one.

Imagine that? We just open on Vince in a rocking chair, wearing reading glasses, and he says, "Welcome…to WRESTLEMANIA!"

For an hour, maybe two, three - however long it takes Vince to get through it - he'll just go through a very detailed account of what the show would've been in his eyes. I provided a little except of how I imagine the main event finish playing out in Vince's mind…

"HA HA HA! AND THAT'S WRESTLEMANIA FOLKS! YOU MUST ALL BE GOING WILD!!! HOW GOOD IS THAT?! WELL, YOU'RE WELCOME! HAPPY NEW YEAR PAL!!!"

What do you think?! Will Vince let the "Show of Shows", the "Grandaddy of 'em All", get cancelled? Will they try to hold it at the Performance Center? Should he just read us all the match results if it does get cancelled? What's wrong with his brain when it comes to wrestling now? Let me know down below in the comments!