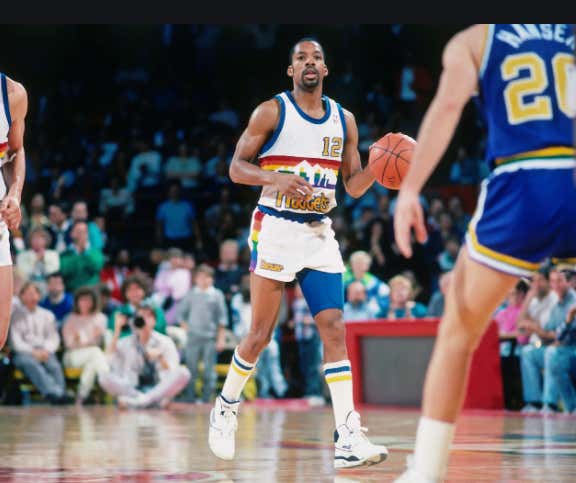 Fat Lever of the Denver Nuggets goes on stealing spree, as he sets a record with eight takeaways in a single quarter. Lever would finish the game with ten steals, as part of a triple-double with 13 points and 15 assists as the Nuggets beat the Indiana Pacers 126-116 at McNichols Arena. Fat Lever was just the eighth player in NBA history to have ten or more steals in an NBA game.

Lafayette Lever was born on August 18, 1960, in Pine Bluff, Arkansas. Raised in Tucson, Lever went to Arizona State, where he was named the All-Pac-10 team twice. In 1982, Fat Lever was taken with the 11th overall pick by the Portland Trail Blazers. After two seasons in Portland, Lever was traded along Wayne Cooper, and Calvin Natt with two draft picks for Kiki Vandeweghe.

After showing promise in Portland, Fat Lever became a star in Denver. A point guard with quick hands, Lever would lead the in NBA in steals twice, play in two All-Star Games, and on the second team NBA All-Defense in 1988.

On the night Fat Lever had eight steals in the third quarter, the Denver Nuggets coached by Doug Moe were 41-22 as they hosted the struggling Indiana Pacers. The Pacers led by George Irvine were among the worst teams in the NBA, holding a record of 19-43. Entering the third quarter, the Nuggets were in control of the game, leading 69-57 at the half. The eight steals in on quarter would be the highlight of the night as the Pacers made a late charge in the fourth quarter cutting Denver’s 20-point lead in half, but the Nuggets walked off with a 126-116 win as Fat Lever recorded a triple-double with 13 points, 15 assists, and ten steals.

Fat Lever was the eighth player in NBA history to record ten steals in a game. Overall there have been 23 players to reach double-digits in steals. The record for steals in a game is 11, it was accomplished twice, with Larry Kenon of the San Antonio Spurs setting the record in a 1976 game against the Kansas City King, a record that was duplicated in 1999 by Kendell Gill of the New Jersey Nets against the Miami Heat.

Fat Lever would spend six seasons with the Denver Nuggets and ranks among the top in franchise history in steals and assists as he had his number 12 retired. In 1990, as Denver began to rebuild, Lever was traded to Dallas Mavericks, where he finished his career.