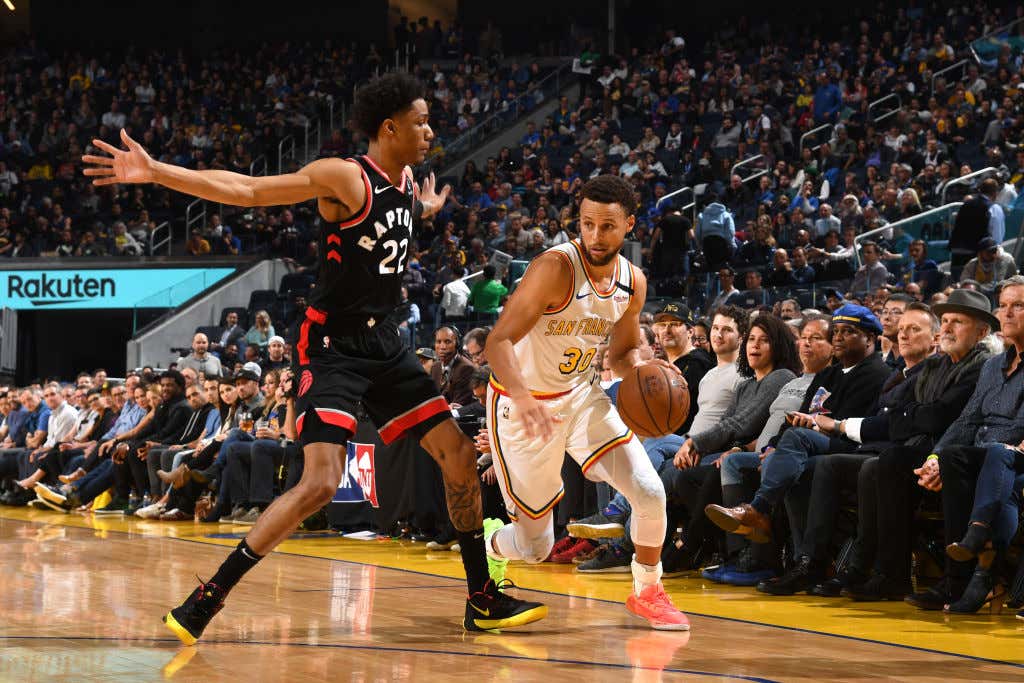 Good morning everybody happy Friday and welcome back to another edition of Last Night In The NBA where we bring you up to speed on everything that went down from the night before in the Association. Despite their only being 4 games on the schedule last night, every single matchup we had involved some important playoff seeding which is basically going to be our lives for the next month or so. All of these games matter for the teams in the top 8 from each conference and we got a little bit of everything on Thursday. There were game winners, huge statement blowouts, much needed wins and of course Steph's return. If for whatever reason you weren't able to watch it all that's OK, here's what happened.

When it comes to the Nuggets, things could be going a little better. They got demolished by the Clippers a few games ago by nearly 30 points, then in their last game at home lost by 16 to the Steph-less Warriors. Not great! They're in a constant battle with the Clippers for the two seed, so when they went down to CHA that was a game the had to win. You can't be in March as a Western Conference contender and be losing to the Warriors AND Hornets. That's how bad things happen for you. Well, if they thought they were going to just walk into CHA and snag the easy win, boy were they mistaken. They found themselves in a rock fight real quick after the Hornets got out to a 34-31 lead after the first quarter, and even with the Nuggets having a strong response in the second, the Hornets just wouldn't go away. They regained control in the third and we had ourselves a pretty epic fourth quarter that needed some Jamal Murray heroics to pull out.

This was a night where nobody on the Nuggets went all that crazy, but they were balanced and efficient. With 7 players in double figures and shooting 50% as a team, this was a much needed performance on the road for a team that's 18-12 away from home.

Jamal Murray was the hero with his game winner, and honestly it was a little surprising that MPJ was a DNP-CD, but the Nuggets have to find a way to play some better defense if they want to get serious about this 2 seed and deep playoff run. Since the break their defense has been dogshit, and I know the Hornets can be pesky, but that's not a team you should allow 112 points to. With the win they stay within 1 game of LAC for the 2nd seed, the only problem is the Clippers just so happen to be the hottest team in the league at the moment so that's not great.

For CHA, I mean hey at least you got an entertaining game out of it. I'm sure many people thought this would have been a blowout considering the Hornets are just 9-21 AT HOME this season but they nearly pulled it out. Credit to them for that! Plus you also had some good individual performances from your young pieces

Graham and PJ Washington combined for 44 which was nice. At the end of the day they just needed one or two more defensive stops that ultimately never came but again, that's not all that surprising.

You know, the rest of the West might want to start hoping the Clippers are never fully healthy, because guess what.

Small sample sure, but look at those opponents they are beating at full strength. Maybe that's why people still feel like this is a title team even though they are not really taking the regular season all that seriously. If that's what is going to happen down the stretch and this team is going to be healthy, yeah they are a problem. Depth like you read about, star power like you read about, a legit as hell defense that is only getting better, this Clippers team has the potential to be a force.

When matched up with HOU, you can see why this isn't a problem for them. They have size at every position which showed to be an issue for this Rockets new system. They don't just have size in the center position that the Rockets can play off the floor, they are big everywhere. Here's what's nuts too. They didn't even get a good night from a ton of their regular rotation players. Mook shot just 4-12, Paul George 5-13, Lou Williams just 1-5 and this game was a blowout pretty much the entire way.

Despite scoring 120 points this was more about their defense, something that during this 6 game winning streak has held opponents to 98 points on 40/26% splits. That's big time.

For HOU, not a great time to lose two in a row. First to the Knicks of all teams and then this. The slide now has them 2.5 back of the 3 seed and tied with UTA for the 5th (who plays BOS tonight), and honestly OKC isn't too far behind in the 6 spot either. What we saw in this game is the downside of the Rockets system. When they can't hit a three, it's a wrap for them. We saw what happened in that Game 7, well it was pretty much the same shit here. They finished with 36/16% splits going 7-42 from three. 7-42!! This would have been even uglier if they didn't get to the line 36 times and man it was pretty much everyone. Harden was 0-8 from three, Eric Gordon 1-6, PJ Tucker 1-5, Danuel House Jr 1-5, just not what you want to see as a Rockets fan.

The harsh reality is even if they have good wins like LAL and BOS twice with this new system, people are going to put more stock into these last two losses and say it won't work. That's just life until the Rockets prove that they can avoid these type of shooting games when it matters most. Oh, and that defense is going back to being below average and if that happens they have no shot anyway.

Weird the Sixers got rid of Embiid and Simmons in the lineup and now all of the sudden they can shoot? Another great night from behind the arc with 49/45% splits and 17 3PM, the Sixers finally secured their 10th road win of the season!

It's getting hard to suggest that Shake Milton's production is just a fluke when he seems to be dropping an efficient 20 points every time he plays, Al Horford and Tobias Harris finally played like the max players they are, and with Neto and Burks combining for 33 points off the bench the Sixers just had too much offense for the Kings to handle. The win allowed them tp jump the Pacers for the 5 seed which still isn't ideal since this team desperately needs homecourt, but they trail MIA by 2.5 games so it's certainly not out of reach. The only downside is the Heat are currently the hottest team in the East and own a 3-1 H2H record against the Sixers. Unless they get hot and the Heat suddenly slide, the Sixers are looking more like a 5/6 seed than a top 4 seed. Woof. Good win though, the Kings had been rolling.

For SAC, they had started to make a little noise as a team that was gunning for the 8th seed, but with this loss they now sit 4 full games behind MEM, who has won 3 straight. Not dead officially, but the Grizzlies look to have figured things out despite having the hardest remaining schedule in the league. They got great performances from their two young studs

and it's good to see Fox back and killing people after missing time due to injury, but it just feels like their bad start and everyone being injured has made this climb a bit too steep. If this team is ever healthy I still feel like they have the talent to be a top 8 team out West, and honestly they really only had one bad quarter which is why the score looks the way it does, but giving up 125 at home isn't going to workout in most cases, no matter who you're playing.

The rosters may be different, but at least this sort of had an NBA Finals rematch type feel to it. I think everyone was excited for Steph to finally be back and he wasted no time reminding us how awesome he is and how much it's sucked that he's missed a billion games

The man defines electricity. You can feel it in the crowd whenever he touches the ball, it felt like old times. Then when he does vintage Steph Curry shit that's what makes it even better. For his first game back 23/7/7 isn't so bad in 27 minutes, and honestly his teammates couldn't stop turning it over in the fourth quarter and that pretty much cost them the game. I'm no so sure the Warriors lose this game if Steph isn't on his minutes restriction because as expected he looked like the same old Steph. The Warriors nearly pulled off the upset because they got great secondary scoring from their other guards

but a tough ending for Damion Lee was too much for overcome.

For TOR, a big win to keep some distance from BOS in the 2 seed, they got the game of Norman Powell's life with a career high 37, the dude couldn't miss in the second quarter

this is what makes the Raptors so dangerous. They are awesome in close games, they have All Star talent that always seems to find a way to get a bucket when they absolutely need it, and then on the defensive end they can tighten up and force killer turnovers with the best of em. They are now 21-9 on the road which is damn impressive and if you are still thinking this team has no shot without Kawhi you're just being a hater. The Raptors are fucking good, they've been good all year and they have the depth and the talent to make a deep playoff run despite now having Kawhi Leonard. Those are just the facts.

And that's it! You are now caught up with everything that went down last night in the NBA. Hopefully that helped kill some of your morning, have a fantastic Friday!