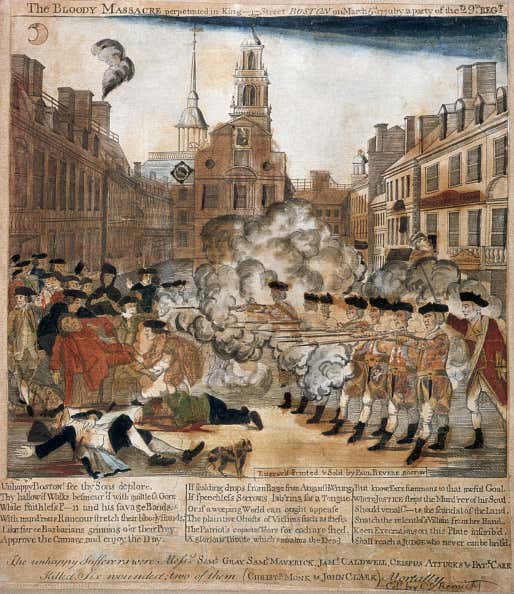 If you happen to think people from Boston are, on the whole, an arrogant, disagreeable, belligerent and possibly paler, uglier sort than people from other cities, you're actually not being insulting. You're just either reading our Facebook posts or you're a Boston history buff. And today is your day to prove your point.

Today is exactly 250 years since March 5, 1770. Otherwise known as the Boston Massacre. In popular history, it's the incident that created the spark that ignited the powder keg of revolution throughout the colonies. In truth, it was a bunch of Massholes starting shit over pretty much nothing. A tradition that continues to this day.

Dictionary.com defines "massacre" as, "the act or an instance of killing a number of usually helpless or unresisting human beings under circumstances of atrocity or cruelty." It's a buzzword, meant to trigger an emotional response. It conjured up images of the brutal, wholesale slaughter of defenseless innocents. And isn't usually applied to a conflict where a small group of soldiers defend themselves against the increasingly violent rabble of about 400 that has them surrounded, killing 5 in all. Which is the more accurate description of what happened in downtown Boston that day.

The word "massacre" was actually attached to this thing by Paul Revere, who, in addition to being a patriot, a silversmith and engraver, liked to dabble in plagiarism. He did the engraving above, having directly copied an earlier work by another engraver named Henry Pelham, while passing it off as his own. In fairness, Revere did make a couple of changes to the original. Such as having the British commander ordering his troops to fire into a peaceful crowd of well dressed, pleasant people minding their own business. And renaming the Custom House "Butcher's Hall" while randomly sticking a lone gunman up in the window. None of which happened.

The truth is, the whole thing started over a wig. Well, to back up, it started when the British crown started stationing troops in Boston, cutting down on individual liberties and generally being dicks. That dickishness was not winning over the locals who were still 175 or so years away from having a hockey arena where they could go to abuse foreigners. So they did it in places like what is now State Street. There, an apprentice to a wig maker yelled at British Captain-Lieutenant John Goldfinch that he had ripped off his boss and owed him money, which was not true. He'd paid his bill in full. A private came to his commanding officer's defense, doing the 18th century equivalent of "Beat it, ya drunk," and a mob of locals gathered to see what the fuss was about.

One of those locals was 19-year-old bookseller Henry Knox. (Knox would later go on to be a hero of the Revolution, dragging the British cannons captured at Fort Ticonderoga by ox cart all the way down the Hudson and across Massachusetts to Dorchester Heights without losing a single gun. Even though there were no cannonballs in them, the British didn't know that when they woke up on the morning of March 17, 1776 to find George Washington's troops had the drop on them, so they noped out of the city with all due speed. Eventually that event would be commemorated with Evacuation Day in Suffolk County, which gives local government hacks St. Patrick's Day off without having to actually pick up the phone and fake being sick.)

Knox warned the soldier that if he fired his gun, some serious shit was going to go down. (Think Sam Elliot having Swayze's back at the Double Deuce and you'll have a pretty fair representation.) Well nothing will attract even more people than a gun and the threat of some serious shit. So a bigger crowd gathered around what became eight or so British troops. The citizenry had clubs. They threw snowballs. Some of which, to be fair to the Brits, would be more accurately described as rocks covered with a crisp, outer shell of snow.

At this point, the only warning system the town had - the Emergency Broadcast System of the 1700s - were the bells in all of the meeting houses. And since bells only make one noise when you pull the rope, there was no way to discern between the signal for "There's about to be some mob violence on State Street" and what they were most commonly used for, which was fire. Reports differ, but it's largely believed that someone yelled "Fire!" which caused one of the soldiers to do just that. Into the crowd. His brothers in arms followed suit. It was random and haphazard, the opposite of the neat row of well ordered troops in battle formation that Revere stole from that other guy. Later a pro-Loyalist pamphlet would be released under the title "A Fair Account of the Late Unhappy Disturbance in Boston." Since that was not nearly as catchy as "Boston Massacre," Revere's name for it stuck.

The soldiers were arrested. They were tried. And of all goddamned people, their defense lawyer was John Adams. Which took incredible balls, given that at the time, defending the Massacre-ers made you about as popular in New England as representing Jeffrey Epstein or the defense in Tom Brady v. the NFL. But as Hunter S. Thompson once put it, "Even Satan deserves good counsel." I know Massachusetts lawyers who otherwise lack human emotion but get all misty-eyed talking about Adams' courage, sticking up for the rule of law in the face of overwhelming public sentiment. And he produced a magnificent piece of jurisprudence. On a par with Jim Carrey in "Liar, Liar." Justice prevailed. Six of the eight defendants were acquitted. Two were convicted of substantially reduced charges. This is the closest thing we have to courtroom footage of Adams' closing argument:

On the third anniversary of the attacks, Adams expressed his pride, his respect for the verdicts and his love for randomly unnecessary capitalization, calling it, "one of the best Pieces of Service I ever rendered my Country. Judgment of Death against those Soldiers would have been as foul a Stain upon this Country as the Executions of the Quakers or Witches, anciently. As the Evidence was, the Verdict of the Jury was exactly right."

Of course, you know where the story goes after that. The propaganda effect still took hold. The dead, including freed slave Crispus Attucks and an Irish immigrant, were considered martyrs. The revolution exploded all over King George's powdered face. And for the two and a half centuries since, Massholes have continued the tradition that started that day. Starting trouble. Finishing it. And winning. You're welcome, America.