Do you believe in miracles? YES!!! Now this may have been the lamest way for that squirrel to take home a W based on a technicality.

But I don't think anybody in their right mind saw this type of an upset coming when they clicked on the blog outside of people who thought it would be pretty fucked up for me to blog a squirrel getting eviscerated by a known cold-blooded killer. According to the video description, this whole confrontation went down because the squirrel was guarding her babies from a cobra.

When the kids are involved, moms usually let out the crazy side of themselves and would risk anything and everything to protect their young. This video shows just how hard a mother squirrel would fight to make sure that no threats come near her babies.

Big shout out to Mama Squirrel for showing off nuts that no Papa Squirrel or even I would have if I saw a cobra. If I walked into my kid's room right now and saw a cobra in there, I would throw my kid the hardest toy I could find, wish him luck, and run out the door so fast I would leave a cloud of smoke behind like the Roadrunner.

However this Mama Squirrel quickly realized the humans behind her were much more interested in watching the Circle of Life play out than lending a hand against an extremely venomous predator. 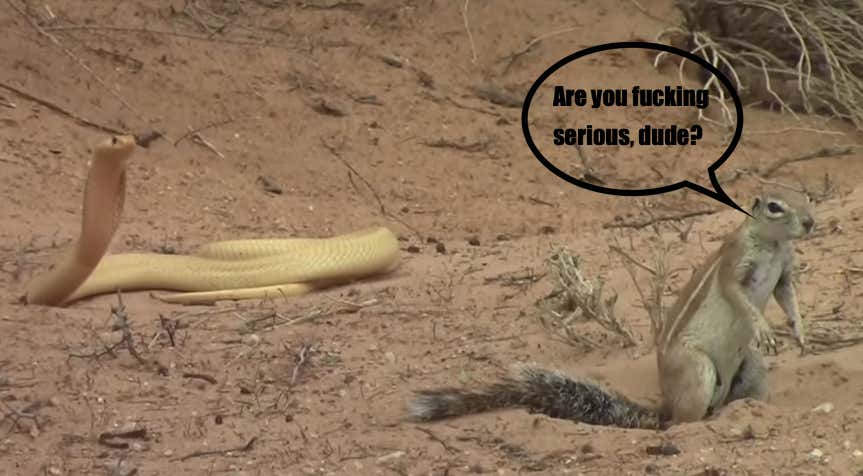 So Big Mama did what any squirrel would do in that situation, which was shuck and jive like Ali in his prime until she tired that slithery snak the fuck out to register a TKO.

I also understand that it's kind of bullshit that this fight ended the same way Poochie died once upon a time.

So here is a video of a showdown between a mongoose and a cobra that people have been dreaming of since the time they read Rikki Tikki Tavi in the 3rd grade.