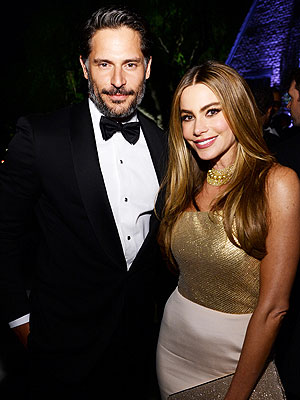 People – Joe Manganiello is spending time with Sofia Vergara, a source confirms to PEOPLE, creating what could be the sexiest couple in Hollywood… The news comes just after Manganiello, 37, raved about the Colombian bombshell… “You’re gonna get me in trouble. I don’t want to be like a home-wrecker. This person is engaged,” he said of Vergara, who split from fiancé Nick Loeb in May. “She’s got the curves, she’s got a beautiful face, beautiful hair, just gorgeous. Naturally beautiful. She’s feisty!… There was a picture someone snapped at the White House Correspondents’ Dinner where they caught me looking at Sofia Vergara’s butt,” he told PEOPLE during the Hottest Bachelor interview. “When you talk about being manipulated, that’s what I’m talking about. It’s like a moment of zen. There is nothing in my brain. If only I could meditate that well. I don’t go after other people’s women. She’s got a guy. If she was single, I would be like, poof!”

Joe Manganiello has gone from a non-entity to my celebrity hero faster than anyone I can ever remember.  I mean, how can you not admire a guy playing the game at this high a level?  He’s playing chess while Nick Loeb was playing Hungry, Hungry Hippos.  THIS is a master class on what you should do with fame.  Make into People’s Sexiest Bachelor issue, go for broke.  Reach for the stars.  Use what little space they’ll give you to shoot a flare in the direction of the hottest bombshell on the planet.  And if she’s seeing anyone, you act like you don’t want to break up what she’s got going because you’re too nice a guy.  Talk about turning every woman in America into a water park!  Especially Sofia obviously since it took her no time at all  to dump her zero and get with my new hero.  She probably even tried to hold out for a day or two.  But there was no resisting a guy playing at this high a level.  Well played, Joe.  Well played indeed.  Remember today when you’re claiming your prize by motorboating Sofia’s exquisite rack, you’re motorboating for us all.

PS. On an urelated note, I just want to say that when I stare at Alison Brie’s butt, I have a moment of zen.  There is nothing in my brain. If onlhy I could meditate that well.  I don’t go after other people’s women.  She’s got a guy. If she was single, I would be like, poof!  Just thought I’d throw that out there. @JerryThornton1