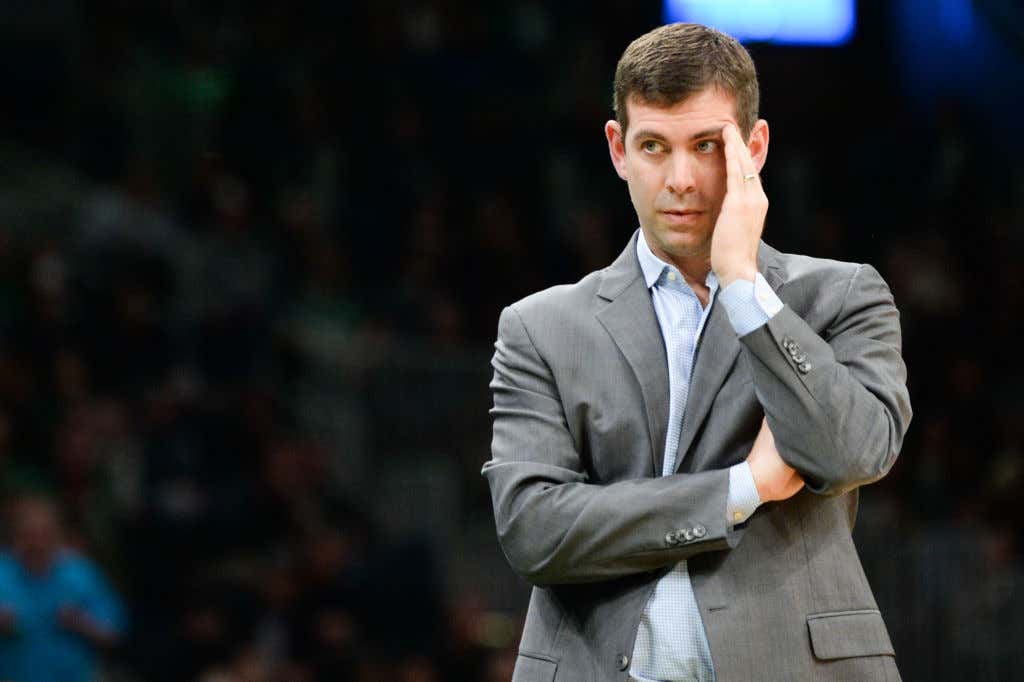 I thought maybe when the sun came up today that I would have calmed down a little bit after last night's disaster. I was wrong. This shit still bugs the hell out of me and has ever since the final buzzer sounded. Frankly I don't even remember what I've been doing for the last like 12 hours, all I keep thinking about is one of the worst collapses I may have seen in my entire life watching this team. I know a 21 point lead isn't the largest lead I've ever seen the Celtics blow, shit we just saw them blow a 28 point lead last year at home to the Clippers. The more I think about it, I think that's why this bothers me so much. This team looked like the 2018-19 Kyrie led Celtics last night. I thought we were done with that shit. This year was a team we could trust with a 10+ point lead. Before the Houston game they were 35-1(!!!!!) when leading by 11+ points. 35-1!!!! That's about as much as a lock as you're going to get. It's why this season felt so different, this team wasn't blowing leads and causing us all to lose hours and hours of sleep. Well, after blowing a 17 point lead at home against the Rockets and now blowing a 21 point lead at home against the Nets in consecutive games, I have some questions

Now, just like after every big Celtics win when I come to this blog and make sure we remain level headed, the same must happen with extremely embarrassing and pathetic losses. Nothing we saw last night guarantees anything come the Spring. Anyone who is out there saying the Celts are doomed in the postseason because they blew this lead is probably just auditioning for a job at 98.5 or some shit. The frustrating part though is while this doesn't dictate what will happen in the playoffs, this self sabotage certainly makes things potentially harder. That's what I care about right now. I care about snagging as high a seed as possible, and with every opportunity the Celts have had to close that gap with Toronto, they've pooped their pants. Not just like a mistaken shart or something, I'm talking full blown diarrhea.

Alright, we have a lot to get to. Let's dive in.

- No fucking chance. Maybe this is me just being petty, but I'm too pissed still to try and spinzone this disaster with any sort of positive moment. You know how mad it makes me that I can't talk about Timelord's debut? Or Romeo's dunk? Kemba's return or Jaylen's 360? I didn't want it to be this way, but don't be mad at me, be mad at this team. They robbed you of those highlights. You come out and play like this you get zero positive spin from me.

Spinzonning for this team is literally the one thing I'm good at in this world, and I will not be doing it here. They don't deserve it, none of them, even Brad.

- OK let's get right down to it. A lot will be made about the ending, but there are way more things to be annoyed about than just how this team choked. For example let's look at the rebounding shall we? What the fuck is a 63-42 rebounding difference allowing 22 (!!!!!!!!!!) offensive rebounds? Last time I checked Theis (2 rebounds), Kanter (7 rebounds), Timelord (3 rebounds), Grant (3 rebounds), were all active. How the hell do you allow that to happen? This is the second game in a row the Celts have lost because they've been lazy on the defensive glass. First it was PJ Tucker and now it was Jarrett Allen snagging 6 and Timothe Luwawu-Cabarrot snagging 5. Absolutely pathetic. This led to 26 Nets second chance points and that's not even the worst part.

The worst part? The Celtics keep falling apart on the glass at the most important part of the game, the fourth quarter. In the fourth last night they were outrebounded 15-4 and allowed 7 offensive rebounds. For all the plays Timelord came through on offensively, the dude could not get a rebound in his 6 fourth quarter minutes. Grant played all 12 and finished with 1 rebound. Kanter played 2 minutes and all he did was foul twice, grabbing 0 rebounds. That is so inexcusable I can't even stand it.

- Here's another frustrating thing. How are you going to defend so poorly at home without fouling? They lost the FT matchup 38-23. The Nets made more FTs than the Celts even attempted, and Caris LeVert went to the line 18 TIMES. You want to know what his season high in FTA was this year? 11. He did it once. He's averaging 4.0 FTA a night. I'm sorry, I know Jayson Tatum was out, but when you have Marcus Smart, Gordon Hayward (for a half), Jaylen Brown, Semi, Grant, etc you should have enough to not allow this dude to live at the line like that. Show some fucking balls and defend without fouling..

- Speaking of LeVert, let's check in on his matchups since he went bananas with 51. Here is a snapshot of his most successful matchups

If you watched this fourth quarter, every single time he got the ball it was as if the Celtics didn't even have a defender on him. It didn't matter who it was, he blew by his initial defender with ease, got to the paint and either scored or got fouled. Same shit in the OT period. For a team that prides itself on perimeter defense, where the fuck was it from all of our good perimeter defenders.

- You know what I don't want to hear about? The injuries. Losing Hayward at the half was tough, but you still had Kemba/Jaylen/Smart/Theis for the entire second half. Jaylen didn't pull his hammy until late in the fourth once you were already blowing the lead. They had enough to beat the goddamn Nets. I know people are very mad at the bench but this wasn't a bench issue in my opinion. They got 40 points from the second unit, that should be MORE than enough to not blow a fucking 21 point lead at home.

In the overtime period, what did you want Brad to do? Jaylen was out, we can't be all mad about Kemba not going over his minutes restriction given how important he is long term, and I'm sorry but someone like Jamal Crawford isn't winning you that game. You know why? Because they couldn't play defense in OT. Who is he locking down? LeVert shook his dick all over the Celts in the fourth and OT and the issue wasn't bench scoring, it was overall team defense.

- For all the good he does on a nightly basis, this was a tough 2 game stretch for Marcus. That's the rollercoaster that is the Marcus Smart Experience, but if he's your captain and one of your most important players you need him to not make so many boneheaded mistakes. The regulation foul, the offensive foul in OT for his 6th foul, just stupid stupid plays.

- 15 turnovers, 8 coming from Kemba and Wanamaker, led to 23 Nets points. You combine that with the 2nd chance points (26) that were allowed mostly due to effort, and I don't know how that sits well with anyone. Careless lazy basketball always comes back to bite you. Always.

- Alright, the fourth quarter. Truly unbelievable stuff. If we're being completely honest I did not know it was possible to allow 51 points in 12 minutes. You know why? Because it had never happened in my entire life. All 32 years of watching this team these eyeballs had never seen that before. That's because the last time it happened was 1972. It's happened twice in the history of this franchise. What the hell even is that? Do you have no professional pride? Is Brad brain dead? I just don't understand how this was physically possible.

I just don't understand how you allow this to happen. How is it possible to be so pathetic defensively for a team that is a top 6 defensive team. At home. With the game on the line. Who knew that it would be so goddamn hard to inbound the ball you couldn't even do it on TWO separate occasions? Hey Brad, what the hell man. You don't have a play to get the ball safely inbounds away form potential defenders who could force a jump ball. Even after two timeouts? Remember, they took one with 6 seconds left after the DeAndre Jordan dunk. Then they had to take another one when they couldn't inbound the ball the first time. What is even going on at practice that we can't even master inbounding the basketball in a high pressure situation? Remember earlier this year against the Sixers when they lost a game at home because they threw away an inbounds pass? Clean it the fuck up.

And of course, there's the Marcus Smart foul.

That's as clean a foul as you will ever see. Did nobody tell everyone to just go straight up? If LeVert makes it over you then so be it. But why on earth are you reaching there? Why even give the ref the option of calling a foul (even though that was a foul)? Not only that, but then Marcus is going to get all mad about it?

No no no no. That's now how this works. You fucked up Marcus, not the ref. You decided to reach when you didn't need to. You fouled. Now you're going to most likely get your ass suspended for a game where the team is most likely going to be without 4 starters. That's just being stupid. Did he think the ref was going to hop in a time machine and change his call? Terrible look in my opinion.

If there's one thing this blog will always be, it's consistent. We're going to praise them when they play well, and we're going to be honest and call them out when they play like complete jackasses. That's what happened last night. Big picture it's 1 game, they are still in the hunt for the 2 seed, shit happens. But there's no denying this team has now choked in back to back games at home with performances that eerily resemble last season which is a problem. Now is not the time to be fucking around throwing away winnable games, not with the seeding races so close. We'll see how they respond to this adversity, so far this season they've for the most part not let these type of losses balloon, and frankly they can't afford to have that happen now.